The recently concluded Ironman Asia Pacific Championship over the weekend in Melbourne highlighted how unpredictable race day can be. The conditions were nowhere near what it was last year. Competitors were unpleasantly greeted with horrendous winds of over 40kph. The swim course was first changed then later shortened for the safety of all competitors. Catch a glimpse of how rough the sea was in the following video.

Well done to everyone who persevered on a very tough day. With such conditions, there were many casualties, even quite a few of the Pros pulled out. A DNF however, is something I would not wish upon my worst enemy.

I'm exactly 5 months out from my big Ironman race in Whistler, British Columbia. Though it would be unlikely to be as windy as Melbourne (I hope so!) the bike course of 1285m total elevation with climbing of one category 3, two category 4s and five category 5s will be a challenge I've never done before. Unfortunately there aren't many hills I can train on in the area where I live.

I'm getting into a habit of a regular training routine already, which is good. Not having to work has it's upsides but that will change when I start my new job next week. The past week itself I racked up close to 50kms of running and 12kms of swimming. I just can't wait for it to stop snowing consistently so that I can head out for a ride. Riding indoors within the 4 walls is not much fun.
Posted by Kevin Siah at 23:50 No comments: Links to this post

Things are settling in nicely. I got offered the job which I interviewed for, starting on April 1. It's for a financial officer position in the department of medicine,Western University. My office building will be right next to Li-Ann's, so convenient!

The weather is still a bit erratic. It can be snowing heavily on one day and nice sunshine the day after. Sometimes both in one day! But I found a good group to train with. The people of London Triathlon Club, mentored by tri guru Sheri Fraser, are warm and welcoming. Can't wait for the weather to be more stable so we can ride outdoors.
Posted by Kevin Siah at 00:41 No comments: Links to this post

So into week 2 in London, Ontario. Time sure flies. And we've had quite a drastic change in weather. From the sub zero temperatures the previous week, the past few days hovered around 0 to 5 degrees with a sudden increase to 10 to 15 degrees over the weekend. The sun has shown itself quite a bit, melting the snow and ice on the pavements. This creates some puddles and turns the paths all mushy and a bit gross. I've had my encounter when I was running around the neighbourhood yesterday where my whole left shoe was stuck in the mud, my left foot literally flew out of it!

We collected the car early in the week. I'm slowly getting used to driving on the right side of the road, switching gears with my right hand (thank god it's an automatic!) and they have a funny rule here, where you're allowed to turn right although it's showing RED on the traffic lights, just as long as the road is clear.

My interview on Thursday went alright. Hope to hear some good news sometime this week. On Friday, Li-Ann and I had dinner at Maxwell McCoys again. It's her birthday this week and she had a free meal voucher to use. Plus, she was in the mood for some ribs. Look at them, they're larger than her head! 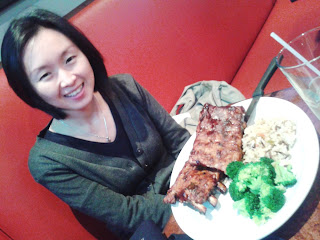 On Sunday we visited a maple syrup farm, which is a tourist must-do for the final weeks of winter. Crinklaw Maple Syrup, about 18kms from our place, is a family owned business. Do you know it takes 40 litres of sap from the maple tree to produce 1 litre of syrup? We wanted to join in the fun with kids on the horse pulled wagon ride but we were told that it was an hour's wait. Still, we enjoyed the pancake and sausages brunch, which made the trip worthwhile.

That's all for week 2, more adventures coming up!
Posted by Kevin Siah at 00:12 No comments: Links to this post

A good friend of mine has started this business in Malaysia and I'm doing a small favour in spreading the word. This service in short, is a portable wifi device that you can rent to connect to your phone or your laptop or your tablet. It is perfect for travellers or tourists visiting Malaysia. We all use the internet these days and most of us, including myself can't live without it. Of course, you can use the roaming service on your smart phone but be prepared to pay a hefty bill later, as quite often our telco providers surprise us with ridiculous charges even for minimal data usage for whatsapp messages etc.

How it works? With 4 simple steps, you can enjoy convenient internet service during your stay in Malaysia.

Step 1 - Registration. Register with myPocketnet as a new user.

Step 4 - Return. Return the device at myPocketnet drop box located at the airport within 24 hours at the end of the rental period.

How simple is that? I especially like the convenience of having the device delivered to you and being able to drop it off at the airport before you leave. Drop boxes are located at Kuala Lumpur International Airport main terminal and KLIA Low Cost Carrier Terminal.

And the service is reasonably priced as well. Here's a comparison of how much it costs against an estimate of international roaming charges from telco providers from the following countries.

For more information, go to www.mypocketnet.com
Posted by Kevin Siah at 23:31 No comments: Links to this post

So it has been about 5 days since I've arrived in London, Ontario. The journey here was a long one. I watched 5 movies during the flights here. The infamous high tech Japanese toilets at Narita airport weren't as complicated as I expected them to be. The connecting flight from Chicago to Toronto with American Eagle was interesting. The plane was really tiny and the aisle was really narrow. I felt like I was on a ferry on a tour around the tropical islands of Phuket!

I have more or less recovered from jet lag. Though I find myself feeling sleepy sometimes during the day. The temperature ranges between 0 degrees to -10 degrees, but quite often sits around -5. We spent the first few days setting myself up - adding myself as a signatory to our bank account; getting a phone plan and a new phone as well as they have something unique here where 10% of your monthly bill gets paid to the cost of phone. We have placed a deposit on a car which I hope that we can collect by tomorrow evening. Shops here close by 9pm which is a welcomed change from what we were used to in Perth.


We just moved downstairs to the basement. Prior to this, Li-Ann was renting the room above us and because now there are two of us, we are only allowed to rent two bed rooms. My bike now has a room all to itself haha. I have not done much training since I got here. I did an hour on the wind trainer yesterday. This morning I met up with local tri coach Sheri Fraser, whom I have been communicating via email prior to this. I missed out on their swim session but I joined a few of her athletes for an hour's run from downtown London into Terry Fox Park and back. Running in the cold with many layers and breathing in heavily the cold air was a new experience.

So I'm still settling in this new place. I have a job interview lined up on Thursday. It's for 18 month contract and it's in the same university as Li-Ann's with the department building being right next to hers. So if I score this one, it'll be just perfect! Wish me luck!
Posted by Kevin Siah at 06:09 2 comments: Links to this post