It's Australia Day today... so for the first time I get a public holiday for Chinese New Year! Also, I get to see some fireworks action to usher in the new year after all. Not exactly your typical red firecrackers but the Lotterywest fireworks is quite a spectacle to watch every year. And this can be easily viewed from the riverfront near my house.

This is my 4th Chinese New Year here in Perth. My 1st, I was invited to my housemate's (back then) church group for dinner. Didn't know many people there but enjoyed the food nonetheless.

I spent my 2nd with Marc and Jer Sie as they were the only ones around that time. Food was delicious as well and seeing some familiar faces helped quite a bit.

Sis was here for my 3rd and so were all my SLB friends. We had a real blast last year, with 2 separate open house functions at Eric's and Jer Kie's!

This year, some of us have gone back to Malaysia to celebrate but we SLBs still had loh sang and some very ang moh Chinese New Year lunch (see below). Thanks, Jessie for hosting us! 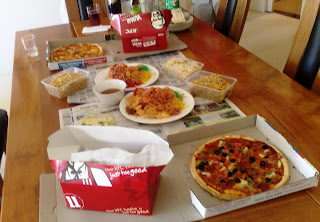 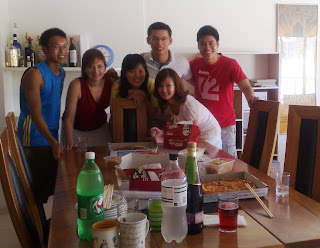 *****
I apologize that lately my blog posts have been pretty one dimensional - updates on Ironman training. But with less than 32 days to go, I can't help myself but to spend most of my time thinking of the big race.

Sunday's 30km run started off pretty well... with 48.24 for the first 10km. But I suffered a stitch shortly after that. Even had to walk 2km as recovery. Really didn't want last week to repeat itself, so I willed myself to complete the remaining distance. Total time taken was 2:41.56 (average 5:23 per km).

A nice, midday 1 hour swim today. Was somehow still slower, could be due to fatigue from the hard workout for the past two days. But glad I could still meet the intervals... and I had the energy to throw in some butterfly as well :) Covered 3.7km of distance.

One more weekend of HARD training before I start tapering...

Looking forward to darling's return this Thursday night...
Posted by Kevin Siah at 12:15 4 comments: Links to this post

Are you kidding me?

Yes, I'm ACTUALLY deriving inspiration from Britney Spears. But check out these lyrics from one of her latest singles, Circus...

There's only two types of people in the world
The ones that entertain, and the ones that observe
Well baby I'm a put-on-a-show kinda girl (guy)
Don't like the backseat, gotta be first
I'm like the ringleader
I call the shots
I'm like a firecracker
I make it hot
When I put on a show

I feel the adrenaline moving through my veins
Spotlight on me and I'm ready to break
I'm like a performer, the dancefloor is my stage
Better be ready, hope that ya feel the same
Okay... after that it becomes a bit gay. But don't you think these are inspirational words? So fellow Langkawi Ironman competitors, come this February 28th, let's put on the BIGGEST show ever!

Was maintaining above 28kph up until 120km but the 2 ice cream cones must have made my stomach felt a bit upset, and my legs were beginning to fatigue. Had to slow down after that.

Weather wasn't as hot as last week but there was a bit of haze due to bush fire from the day before. Total time taken including the break was 6.5 hours.

Was planning to do a 30km run, with the intention of improving on last week's time of 2:27.19. But that went up in smoke when I suffered a stitch somewhere around the 7km mark.

Stopped for a couple of minutes to nurse the stitch. I did the remainder of the distance in a slow, jogging pace.

In the afternoon, I went for a swim. Even that was much slower than my usual pace. Maybe the 160km ride has taken a toll on me. But good thing I was still able to meet my interval times. Swam 3.7km comprising of various sets in 1 hour.

It is in times like this where one needs the most motivation...

Posted by Kevin Siah at 14:13 5 comments: Links to this post

Back in Perth for a week now... Eric's birthday dinner at FAB Burgers, Subiaco was a nice get-together. Thanks Eric for the treat!

Sunday's supposedly 160km bike ride became a discounted 130km distance. Temperature was a scorching 37 degrees. I only carried 2 bottles of plain water. Had to take several breaks under the shade. I was getting hungry and my legs were feeling weak towards the last 20kms. Learnt a valuable lesson - next time, I'll schedule a meal break during the ride and BRING SOME MONEY! Completed the 130.5km distance in 4:47.57 (average 27.2 kph)

Training on your own is hard work. No ice cream cendol at Bentong to look forward to. No social chit chat at the Sri Hartamas Petronas station. Just me, myself and the sun.

Looking forward to the day darling returns...
Posted by Kevin Siah at 08:18 10 comments: Links to this post

In an attempt to avoid the crowd and traffic jam, darling and I had our New Year's Eve dinner at somewhere close by, Steak Out at Bandar Puteri Puchong.

The food was good and reasonably priced. Service was pretty quick as we were at the restaurant early. Although it would have been better if both our mains came out at the same time.

It has been a while since I had escargot, can't seem to find any in Perth. Which is one the main reasons I chose this restaurant. 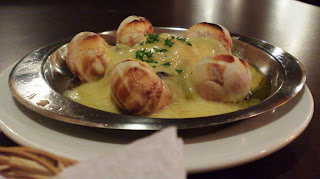 I had the pork chop while Li-Ann had the Areeba chicken. Both were tasty and in sizable portions. 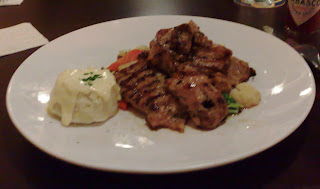 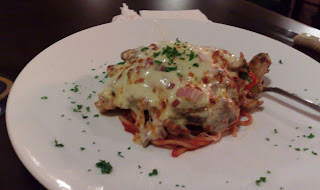 After that we went to a friend's house, also in Puchong, for barbecue and watched the fireworks from on top of a hill. I guess age is catching up with me but I seem to prefer having quiet new year's eve celebrations like this rather than being in the congestion at any of the countdown parties in KL.
*****
After a reasonably early night's sleep at 2am, darling and I were at Lake Gardens at 6.30am for Der Pacemakers Network Run. Honestly I slightly regretted signing up for the run and would rather enjoy my new year's eve celebration. Dad and my sis arrived at the same time as we did, and we all took a 10 minute walk to the starting line.

We collected our race bibs and timing chips, did some warm ups. Most of us seemed a bit tired from the night before and gave the why-did-I-sign-up-for-this look. Li-Ann who was doing her first run, seemed a bit nervous and was slightly intimidated by her fellow competitors in their fancy running gear. 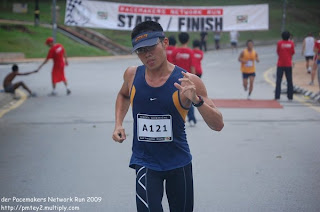 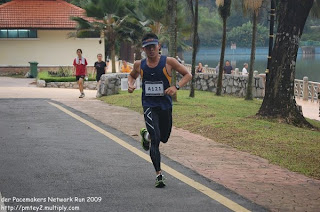 I managed to sneak myself into 7th position for a trophy, out of 28 runners in my category. My sister had a good run too, clocking 49.22 for 9.2km, coming in at 6th position, grabbing the last trophy. 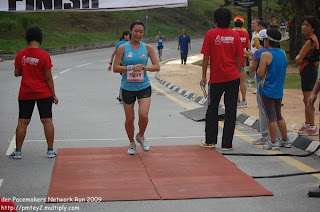 Dad as usual had a lot of fun. He seems to be the one who has the most friends amongts us at running events now! Stopping the clock at 1:18.59 for 13.8km. 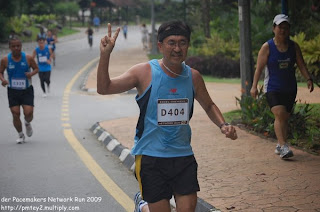 And I couldn't be any prouder for my darling Li-Ann, finishing her first ever 9.2km run in 57.20! And to think I could have finished my 6 loops quicker than her 4 loops. My darling can run man, don't pray pray! 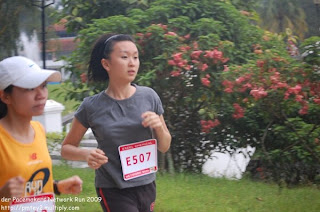 A good start to the new year, I even won myself a New Balance shoe bag as a lucky draw prize. Thanks, Mr Tey for the wonderful pictures and well done, Pacemakers for a successful event! 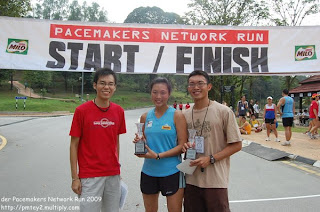 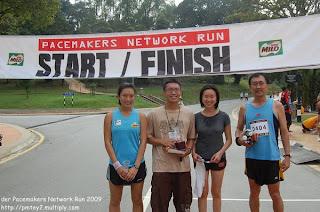 This would most likely be my last post before I return to Perth. The Ironman logo countdown is up, hope I can maintain the same (if not more) motivation levels to train. Happy 2009 everyone!
Posted by Kevin Siah at 11:07 8 comments: Links to this post