I sometimes surprise myself as to how rigid I can be and how resistant I am to changes. Take my triathlon training for instance. I have always done the same bike route, same run route. Even when I'm doing my long rides, I just do a few rounds. As for long distance running training for the Ironman, trust me, doing 7 loops of 4.35km can be pretty mental at times!

Since moving to this neighbourhood, I have been travelling to my usual swim pool at UWA. It takes about 20-30 minutes drive from our place, depending on traffic.

For my last two swims however, I tried something new. Li-Ann was given two free passess to the swimming pools near our place from the municipal council. Sort of lot a welcome gift for moving into the neighbourhood.

The first pool I tried was Terry Tyzack Aquatic Centre in Inglewood. There was a tri squad there under the coaching of Ross Pedlow of Exceed Sports. Fellow tri blogger, John Cooke joins that group as well and we had a short chat. The session was pretty good. I'm used to swimming in a 25m pool, so my times were slower at this 50m one. And it hit nearly zero degrees that night, so I was feeling a bit numb, most likely due to frost bite!

The other pool was even closer to home, Balga Leisurepark. I did my own session this time. It was an indoor heated 25m pool. Nice, short and warm. Having said that, I still swam slower by 5 seconds for every 100m. Mainly due to the walls being higher and I found it difficult to turn.

Would I be changing pools anytime soon? Probably not. I know I would adapt to a new place if I gave it a chance. But I'm justifying my decision purely based on costs. I do not have to pay for pool entry at UWA, just the coaching fee. But these places charge almost $5 per entry, on top of the coaching fee. Which is way more than what I would pay if I stayed on at UWA, even after taking traveling costs into account.

Yes, I am an accountant by profession, after all! :P
Posted by Kevin Siah at 13:35 7 comments:

Last Tuesday marked the four years since darling and I officially became a couple. As it was a weekday and being the over practical people whom we are, we waited until the weekend to celebrate this special day.

We had lunch in Norfolk Hotel, Fremantle. I'd probably get myself into trouble for bringing my girlfriend to a pub for our anniversary. But the food reviews were good, and quite frankly, we have been slightly let down by the fine dining places in Perth lately.

It was a bit noisy, as after all, it is a pub. But the food definitely didn't disappoint. For mains, we had a lamb shank and a prawn pizza. Both were delicious, and reasonably priced. 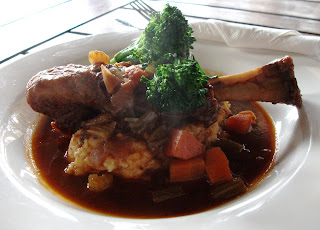 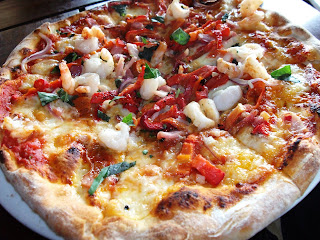 And just because we were feeling a bit hungry, we ordered a bowl of hand cut chips with aioli as well. They tasted really fresh but half way through the bowl, we simply couldn't fit in anymore. 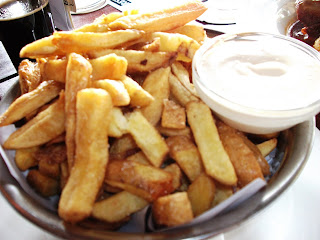 Having said that, there is always room for dessert! So we proceeded to San Churro for a drink.

And it's a good thing we stuck to just drinks, and didn't order any cakes. The cookies and cream shake that I ordered was really rich! 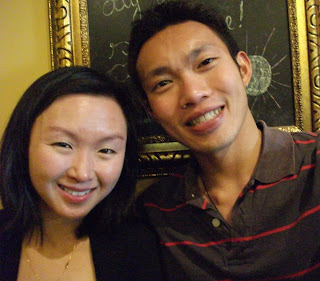 Looking forward to many happy years to come :)
Posted by Kevin Siah at 20:43 10 comments:

Hey, looks like I was able to blog after all! We have only exceeded our on-peak limit (1am to 1pm), so I have about 20 minutes to spare on the off-peak internet connection!

It was a pretty humid weekend. It rained on Friday night, irking me a bit as I had my laundry outside. I did my usual 82km ride on Saturday morning. It was pretty cloudy and winds were pretty light. But boy, was it humid! My cycling jersey was drenched with sweat by the time I was finished. My average speed was 30.1kph.

Then I did a 6km brick run. Started having a stitch by my side, but I eased into the pace and it soon went away. Finished the run in 26:26 (average 4:25 per km). Was pretty happy with that effort, but found myself gasping for air towards the sprint finish, could be due to the humidity again.

I followed darling to donate blood later in the morning. The waiting room was full, but we still hear constant marketing drives calling for more donors. This is my first time donating in Australia, I've done it a few times back home.

The blood bag was attached to an electronic device, which indicates the average blood flow per minute. Somehow, the competitive triathlete in me took over and I found myself racing against the indicator, pumping as fast as I can. Until soon, my arm became numb and I had to slow down a bit. Unfortunately, Li-Ann was unable to donate as her blood pressure reading was too low.

All the best to those running the KL Marathon next weekend! Including my sis and dad!
Posted by Kevin Siah at 12:36 No comments:

We have exceeded our internet limit for the month. Will be on blogging hiatus for another week. Catch up then!
Posted by Kevin Siah at 12:45 No comments:

We had quite a hectic weekend. We attended the wedding of our good friends, Jon and Angie on Saturday. The church ceremony was held late morning and the dinner reception was at Mosmans Restaurant, beautiful place overlooking the Swan River.

I truly enjoyed both events. The pastor who solemnized the marriage was humourous but also gave very practical advice to the newly wedded couple. And then at night, the speeches from groom's dad and bride's brother were very touching and heartfelt. Even the wedding favours and table decorations were very personal - tiny jars of home made kaya by the bride herself and wooden benches made out of ice cream sticks by her mum.

After the wedding dinner, we met up with our other group of friends for surprise birthday cake cutting. The next day, I rode 82kms in pretty breezy conditions, winds were blowing above 20kph. I averaged 29.5kph for the ride, was too tired to do a brick run after. I took consolation that I've done two runs under 55 and 1/2 minutes this week, one was 55:21 - my fastest since Ironman Langkawi.

In the afternoon, we met up with Jasmine and visited her house for the first time. The girls then enjoyed themselves by watching Sex and The City 2, while I took a gamble by watching The A-Team. I was tossing between that and Prince of Persia.

And I DEFINITELY didn't regret my choice! It was full of action and pretty clever too. My only whinge would be that BA Baracus character was a bit wussed out. The original BA a.k.a Mr T was much better. 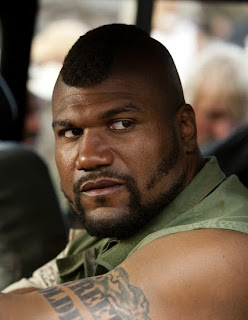 The week that was...

Tomorrow is Friday and then it will be the weekend again.

The past weekend was a long one, with Monday being Western Australia Foundation Day public holiday. I took a day off training on Saturday to help a friend. The poor girl had her ceiling caved in. Must be due to the after effects of the hail storm in March. Fortunately, she wasn't in the room at that time. She was very kind to treat us to lunch at Ipoh Garden for our efforts of helping her clean up.

Sunday I did my first brick training for the season. 82km ride with winds blowing just above 20kph. I averaged 29.9kph. The 6km run after that was pretty challenging, I struggled a bit but managed to slip just under 27 minutes. Looks like it will take me a while to get back into running well off the bike.

Monday I ran 13km. Legs were pretty tight but I was able to keep it under 56 minutes. We then had lunch at Fast Eddy's. I had a steak sandwich, which honestly looked much better than it's taste. 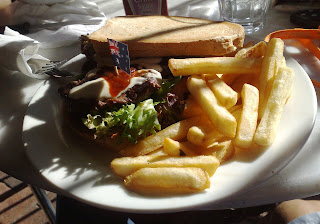 Li-Ann's cousins are here for the week. They have quite a tight schedule as they are taking their pre-wedding pictures here. But we managed to catch up for dinner on Wednesday at City Garden in Northbridge. Of all my years here in Perth, I don't think I've eaten there before. Had always dined in other Chinese restaurants. The food was actually really good! We ate until we were stuffed. Would definitely go back there again.

This morning, I attended a financial reporting updates seminar organized by Deloittes, our auditors. The invitation mentioned breakfast would be served, hence I deliberately went with an empty stomach. And I was definitely not disappointed! There were muffins, croissants, cold meats and yoghurt placed at the centre of each table. And I thought that was it, but partway through the seminar, the wait staff brought each person a plate of cooked breakfast - toasts with poached eggs and bacon. I doubt anyone was paying full attention to the seminar when they were busy gorging themselves with food!

Tomorrow is not only the first kick-off of the World Cup but it will also be my brother's first SUKMA swimming event in Malacca. I can't help but feeling a bit envious, no doubt very proud of him. This would be the penultimate point of his swimming career. All the best, Keith!
Posted by Kevin Siah at 21:16 7 comments:

I attended a seminar at my workplace on Friday, on disability awareness. As we do deal with people who have various degrees of disabilities, the seminar taught us a few things we should keep in mind when interacting with them.

The person who gave the seminar, has cerebral palsy herself. Despite her speech impediment, I had no problems understanding her. She was a very bubbly person, her workshop was full of humour and zest. And I did learn a lot. Her key message was people with disabilities just wanted to be treated like people as a whole.

She wasn't asking us to ignore their disabilities, because let's be honest, they are the first things we notice. But let's look beyond their disabilities. They are people too, just like us. She mentioned how very often, when she's out with dining with her husband, or shopping with her daughters, that other people would just talk to either husband or her daughters as if she's not there.

She then had another speaker who was blind (totally no vision) who shared her experiences with us on how she coped with her day-to-day living, taking care of her kids (who are now all grown up) and how she uses a special machine to read out messages and even tells her the colour of the clothes when she's out shopping.

She now runs training courses for others who are visually impaired to learn to live with this disability. Majority of them are the elderly whose vision has deteriorated and to suddenly adapt to this loss of vision is indeed a scary experience.

Both these ladies have touched my heart that day. Their disabilities were not their choice. They couldn't do anything about them. But they accepted that fact, and went on to make the most of their lives. Making this world a much better place for those with disabilities as well as those without.

Kinda put things into perspective, doesn't it?
Posted by Kevin Siah at 16:06 2 comments: