I had a good week of training, felt strong for most of the sessions. I finished the week with a back to back ride weekend - 4.5 hour ride on Saturday, starting at the eastern hills which took me about 3 hours, and I made up the remaining 1.5 with a ride along the river. On Sunday, while the most of Perth community were out running the City to Surf, over 42,000 runners to be exact, I did a 2 hour ride on Freeway South. The weather was calm and cool, with slight overcast. I truly enjoyed my ride and I'm sure those who ran this morning did some pretty fast times. Well done to all those who competed, and congratulations to those who achieved their PBs!

Entries opened today for the inaugural Ironman Asia Pacific Championship to be held at Melbourne in late March next year, offering 75 qualifying slots for Kona, more than 25 from the usual Ironman events. The event was sold out in a record time of just over 5 minutes! It seems like it is the norm now, with Ironman events selling out on the same day and interested participants have to commit themselves a year in advance. With more and more people taking up this sport, the natural laws of supply and demand dictate increasing entry fees. This particular race is more than 20% dearer than Ironman Western Australia.

Congratulations to those who managed to secure a spot and having the courage to make the commitment, especially for those entering their first Ironman event. I didn't join the bandwagon, in contrast to the title of this post. A couple of reasons, as I think 3.5 months will probably be not enough for me to recover from Ironman Western Australia to be at my racing best. Another reason as I'm pretty keen to try Challenge Cairns, an Iron distance event outside the Ironman series. The timing will be perfect, a few weeks before our wedding and it will be a good race to do before I take a break from endurance events and start looking at other things in life (but I make no promises, so don't hold me onto anything! Haha)

The odd thing is... despite offering the same distance and similar experience, the entries for Challenge Cairns are really trickling. The race would not offer any qualifying spots for the Ironman World Championship but I'm sure the event organization is top notch and the satisfaction of completing the race is just as great. Anyone keen to join me?

On the lighter side, I have relatives over for the week. My cousin, his wife, his daughter, my aunty and uncle are here to visit. We went to Fremantle today, which was nice as it's been a while since Li-Ann and I have been there. And even a longer time since we did the touristy stuff like visiting the markets and having fish and chips by the harbour.
Posted by Kevin Siah at 20:41 4 comments: Links to this post

Confessions of a shopaholic

Well not quite... but in the past few weeks, I have made quite a few purchases off the internet, which somehow always make me go on guilt trips whenever these purchases are triathlon related. Nevertheless, I take comfort in convincing myself that these few items are essentials for the average triathlete. 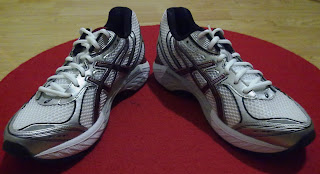 Another pair of Asics GT-2150s. I'm currently already using a pair as my trainers. These have served me well and provided great arch support. I normally change my trainers once a year but with the increased weekly mileage, my current pair are wearing out soon. I would have loved to upgrade to the newer 2160 model, but these were going at a clearance price on Start Fitness, which also prompted the pre-emptive purchase. The red colour is less striking than my current lime green ones though. 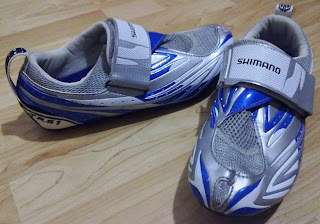 Shimano TR51 triathlon bike shoes. Got them pre-used at a steal price from the TriWa forum. My current and only pair of bike shoes, the TR30s have been through thick and thin throughout my triathlon journey. But it is time to let them go. Also, these blue babies match the colour of my bike haha.

Nothing extra exciting have been happening since the Perth Half Marathon, hence the one week lapse in my blog posting. Li-Ann and I watched the final instalment of the Harry Potter mini series in the cinemas today. We have been playing catch up with the previous three episodes by watching them on DVD. I've watched all the Harry Potter movies, but mainly for entertainment value. I find myself asking Li-Ann, who has read all the books, a lot of questions after each movie.

We ended the weekend with dinner at Mille Cafe, $9.95 pizza specials! We had to take away most of the pizza and I have to say, when it comes to pizza, we pledge our loyalty to Little Caesars! Although, the apple cake we had for dessert was pretty good. 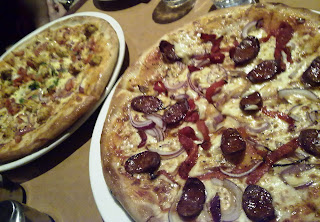 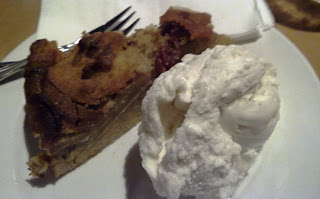 Posted by Kevin Siah at 20:24 No comments: Links to this post

Somehow, this race wasn't included in my original preparations for Ironman Western Australia at the end of the year. However, when I signed up with Bill's coaching, I had a guess that he would have me racing this event. If I had known earlier, I would have signed up before the early bird entry ends and save myself $5! Haha, yes I am an accountant after all, every penny counts!

I have been feeling pretty good with my running sessions lately. And by clocking a 4:10 per km average at my most recent 1.5 hour long run, I set myself a challenge to try to run sub 87 minutes at this race, which is 4:07 per km. My previous best was at the same race last year, 1:28:33. Last year, I did an 80km ride the day before. Whereas this year, I did a 4 hour ride (which ended up being 4:12 because of the nasty northerly winds on the way back!) on the eve of the race. So it will be interesting to see how my legs hold up.

I slept like a log the night before, after a hearty meal at Catalano's Cafe. Didn't have too much sweet stuff this year for dessert, as they gave both myself and Li-Ann stomach upsets towards the end of last year's run. 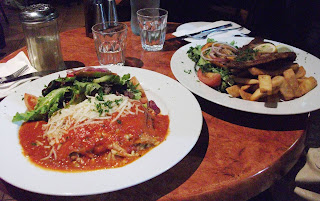 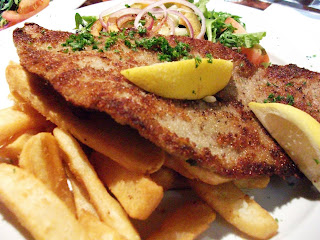 Race morning, I got to the WA Marathon clubrooms at 7.30am, but all the parking spots were already taken up. This year's turnout was over 740 runners for the half marathon event alone. Parked a bit further, no worries, I did a warm up jog to the club rooms. Caught up with the guys from Break Your Limits, it's nice meeting up with people you know before the race to calm your nerves. Other people I met were Dennis Tan and John Cooke from North Coast Tri Club. We left it to the last minute before doing a warm up jog, after which Sam, my riding partner appeared, catching me by surprise. Sam and I then walked to the starting line, making it just in time, less than 1 minute before the 8.00am start! Yes, you can tell I'm much more relaxed this year! 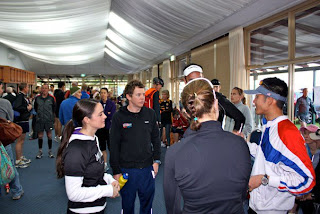 The start was a bit crowded, I got a bit worried that my pace will be affected but I crossed the 1st km marker in 4:03, and the 2nd in 3:59 so I was doing well ahead of target. I was pacing with whom I thought was Nera Jerab, WA's state champion for the Perth Marathon, and as I soon dropped her off, I tought to myself that I was doing pretty alright! Later, I found out at the turnaround point at the Narrows Bridge, that Nera was away ahead of me and would eventually be the women's champion in a blitzing 1:23:38 (no surprises here!), and the girl I dropped off was her sister Visnja, who actually finished 17 seconds after me. 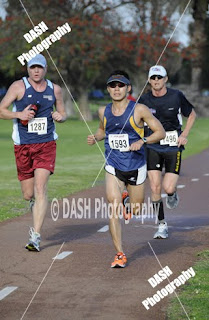 The km markers were a bit inconsistent, but overall I was averaging just under 4:07 per km pace. I got to the 10km mark at 41:02 and were beginning to overtake some of the runners in front of me. Our BYL Man of Mystery, Shao (Wuzza) Wu was taking pictures at the South Perth foreshore, cheering us on, so I was feeling pretty good.

But it soon came undone from 12km onwards. I was beginning to feel some minor side stitches and it didn't help that despite the weather being generally calm, any slight headwind will tend to affect your mind and body when you're starting to suffer. Also, the absence of km markers from the 13th km onwards made it a bit difficult to estimate if I was on track. Plus, on this part of the course, we had to to go through some short, but pretty steep hills at the East Perth foreshore, which will throw off your leg cadence out of whack. Here's where I constantly needed to tell myself, to just keep the momentum going! 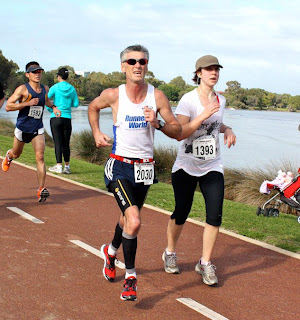 The last few kms, I was inching closer and closer to veteran runner, Mitch Cleasby. We got the finishing chute together and I started sprinting. But, the crafty Mitch wasn't going to let me overtake him, so he picked up his cadence and left me in his wake. I finished a second behind him in 1:27:32, a minute off last year's PB, in 58th place overall, as Mr BYL himself, Ray Lampard, one of the race emcees, commentated my finish. I guess, despite being a bit off target, I really can't complain as it is still a new PB. 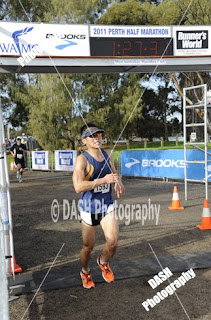 Caught up with the other guys after the race, most of them did their PBs that day, indicating a combination of great racing conditions and effective training programs, which are really paying off. A good day out.

*Pictures courtesy of Lena Inkson and Dash Photography*
Posted by Kevin Siah at 19:45 4 comments: Links to this post