Missing out on OZ day and CNY

Gosh... my last post was the first post of the year and now, we're nearing the end of January already! Partly to do with me blogging less often. Not that I'm unusually busy, just haven't found anything exciting enough to be worth blogging about. And I think opening a Twitter account has something to do with that too. I have been posting micro news regularly through Twitter and hence, not leaving much for me to blog about.


Anyway, so here's my 2nd post of the year. Nothing much has changed over here really. Still cold, cold and bloody cold! We do get a "warm" break every now and then, when the temperature moves closer to zero celcius but has been in the negative teens for most days. I haven't ran or rode outside since mid November. The problem with running on the treadmill at hard efforts most of the time, not always can my legs keep up and it's pretty demoralizing to have to manually turn down the speed. Whereas when I'm running outside, if I feel tired, I just slow down and not think much about it. I know it's the same thing, but somehow it feels different!


Well, only about 1.5 months or so until it's officially spring. And I hope we get some spring weather earlier than that. I'll be signing up for the Forest City Half Marathon soon. The early bird entry ends this month. It'll be my first race for the year... but it's so far away in 3 month's time! Well, the good thing is, I get to do some outdoor runs in early spring before the race. We'll see if I can better my half marathon PB from 3 years ago - race report here.

It has just dawned upon me that it's Australia Day this Sunday. It's funny how you miss and appreciate these things when you're away. We have occasionally gone to see the fireworks but sometimes it has been too much of hassle with the road closures and high traffic. One memorable Aussie Day ritual was the underground triathlon organized by my good friend Dennis. I did it for the last two years. Man, I sure miss those days. Wishing all my Aussie mates a happy Australia Day!

And in a week's time it'll be Chinese New Year! Although I haven't been back home for CNY every year, I was home for probably only 3 times in the last 10 years, it still doesn't make it any easier not to miss spending it at home with family. This would be Li-Ann's first CNY away from home too. So we'll try to have our own festive celebration on our own. My wonderful wife is going to make my two favourite CNY treats - pineapple tarts and bak kua! The atmosphere won't be like home of course, but it will still be special regardless. Wishing all my family and friends a happy Chinese New Year! May the year of the horse gallop you to plenty of happiness and prosperity! Kiong hee huat zhai!

Posted by Kevin Siah at 09:43 No comments: Links to this post

It has already been close to a week into the new year. How time flies! To many, starting the new year means starting with a clean slate, a fresh start. I've decided to jump on the Twitter bandwagon. I know... it has been around for ages and I'm lagging behind. My Twitter page is listed on the right hand side of this blog. I've also given my blog a new look. For most people, the new year is also a time to set new goals and for many triathletes, this relates to their training and races for the upcoming year. My latest article was featured on Lycraheroes here on how to get back into training after the festive season, thank you Lycraheroes!


We had a nice 9 day break for the Christmas - New Year period. There was a bit of ice storm in Southwestern Ontario the weekend before Christmas which left certain parts to have their power cut off for days. It was a pretty sight with trees being coated with shiny ice but it was inconvenient and sometimes dangerous getting around. We had a lovely Christmas dinner with Li-Ann's cousins and had a short visit to downtown Toronto, our first since we've been here. It was pity that it kept snowing and we could barely spend much time outdoors. 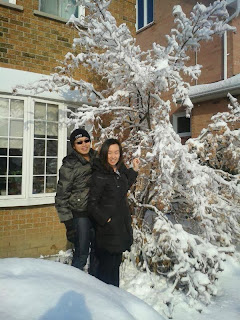 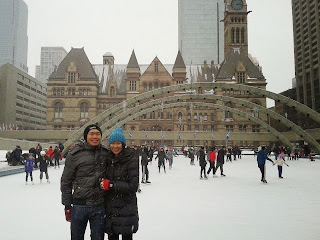 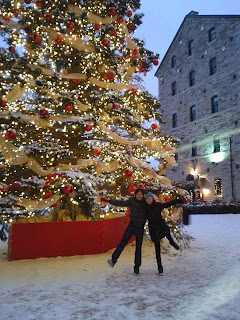 For New Year's, we took a drive to Niagara Falls. Again, the roads were very slippery with snow and the wind was pretty strong that day. Our car actually skidded on the way to the winery where we initially planned to visit for some ice wine tasting. Luckily nothing bad happened. The wheels did get stuck in a thick layer of snow but a kind couple who were passing by in their 4WD came to our assistance and towed us out. After that, we decided to call it off and head back to the B&B. At night, it was still windy and cold -20C with the wind chill! The plan was to watch the countdown concert featuring Demi Lovato, but we skipped that too and watched it on the live stream from the comfort of our room. Still, it was a nice getaway and the Always Inn Bed & Breakfast is a great place to stay if you're visiting Niagara Falls. It's managed by a Zimbabwean couple and we highly recommend the place.


On my training front, I've just been ticking along, nothing too crazy. About 2-3 sessions each of swim, bike and run. All of these are done indoors. One of the bike sessions include the group bike class with Coach Sheri, with our own bike trainers. It's a nice change in environment from facing the window in our living room. The aim each week is try to get just over 200kms of mileage or about 10 hours of training. I can't wait until summer comes when I can start getting serious in my training.


So far the first week of 2014 has been pretty uneventful except for this morning where we had over 1 foot of snow blocking our driveway. The road in front of our house doesn't get ploughed as it's a residential road with not that much traffic. Took us (my wife shovelling and I tried to steer the car out) over 30 minutes before I could get moving. I thought it would have been a day off from work but unfortunately, it wasn't.


Until then, we'll drive safe and keep warm over here. For our friends back home and in Australia, I have to say I'm really envious of the sun and heat you guys have over there!
Posted by Kevin Siah at 09:42 No comments: Links to this post