Only in it's second year running, the Tweed Coast Enduro is fast becoming a popular half iron distance event on the calendar. Located in Pottsville, an easy 1.5 to 2 hours drive from Brisbane but remember that with daylight savings, we lose an hour once we cross the border to the state of New South Wales.

I signed up for this event late last year and with our first baby due in about a month's time, this is the last event I've committed to for the year (although I'm not ruling out signing up for any event at the last minute hahaha). The event was held on a Saturday. Li-Ann came along and we decided to stay for the weekend, also making this our last holiday (or as Li-Ann calls it ra-cation) before the baby arrives. We stayed two nights from Friday in a nice bed and breakfast, Escapebnb, less than 2kms from transition. It was a 3 bedroom place and all of us staying there were doing the race. The host was nice enough to get up at 4am to make us breakfast! She was just lovely and we really got spoiled throughout our stay!

I was in the last wave with an 8am start, so I got a bit of extra sleep-in. I decided to ride to transition on race morning, instead of racking my bike overnight. I'm glad I made that decision, because it rained overnight. With entry numbers around the 300 mark, transition wasn't as busy as what I'm used to seeing. We had the old school marker pens for our body numbering as well. Once I got set up, I found a nearby public toilet for that important last visit... and there was no queue too! And then, a long 20 minute walk to the swim start as it was a point to point swim.

The anxiety did build up watching the earlier waves get into the water and starting their race. The swim was in Mooball Creek and the selling point was most of it - 95% was current assisted! We started with a short 90m against the current and a U-turn to swim with the currents for the remainder of the course. When we were waiting for our start, I realised how shallow the water was, about waist deep and it stayed that way for most of the swim. The water was crystal clear and we could see fishes every now and then.

I was a bit hasty at the start and got caught in the marker lines a couple of times. But once we made the U-turn, I found my rhythm and started gaining my way through the field. There were less than 30 people in my age group and I soon came to a point where there weren't many within sight ahead of me. The faster ones were probably well ahead. 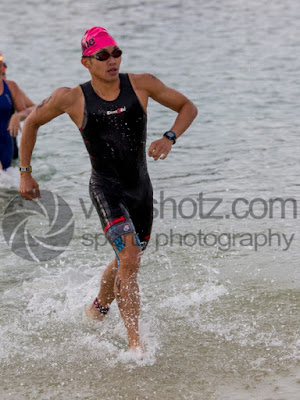 As we got through the bridge nearing the finish, the sand build up made the water even shallower. I saw a few from the earlier waves in front were already standing up. I stood up for a while and tried walking and found that made me slower, so I got back to swimming again. Once I made the left turn towards the end of the swim, immediately I could feel the currents pushing me away. That's when I had to stand up and wade my way for the last few meters of the swim. My swim time was 27:05, much quicker that what I'm used to clocking. Though I was expecting quicker with the currents. But looking at the results, it seemed overall swim times were slower than last year.

I probably had one of my messiest transition in recent years, just one of those days. I fumbled with getting my bike saddle off the rack, with the rear bottle getting stuck. Then as I passed the mount line, I needed several attempts before I could mount my bike without falling over. I was about 9th or 10th in my age group out of transition, and a couple of guys overtook me within the first few kms of the bike.

The course is L-shaped and we go through it 4 times, with a small 40m incline before the turnaround. As my bike handling skills continue to be a work in progress, I was more concerned about the turnaround than anything else! At least this time I didn't have to unclip one foot at each turn. And at the end of each lap, we make a U turn at a roundabout. That's where the Trent and the Red Dog crew positioned themselves to cheer us, I had to take extra caution not to come off my bike but not going too slow either so that I don't look like a novice - such pressure! 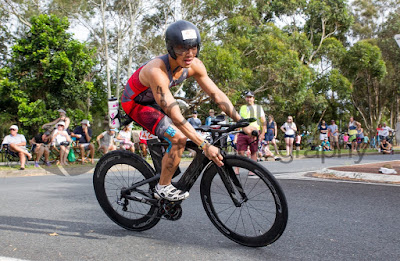 We generally had a headwind on the way out and tailwind on the way back, with a bit of cross wind at some open areas. There were a couple of occasions where it was pretty gusty and I had to get off my aerobars onto the drops to steer, just so I don't get blown off my bike. The wind sort of changed directions a bit on the 3rd and 4th lap. And on my 4th lap, it was pissing in rain! There were some puddles forming on the road and I had to make sure that I did not ride into any potholes that were now difficult to look out for. I was happy to overtake one of the guys from my age group towards the last few kms. 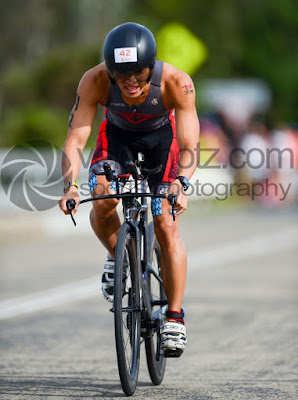 My bike split was 2:33:15 including transition time, I was hoping for sub 2:30 but was willing to accept anything below 2:35. I averaged 193 watts, just one watt lower than Hell of the West few weeks ago and my NP was 202 watts, 4 watts more. So despite the slower average pace, I was putting in almost identical efforts, hence I can't complain. Full bike data here.

Got into transition still about 9th to 10th place in age group. A quick slip into my shoes and putting on sunglasses, visor and race belt on the go. My legs felt okay and I was able to turn them around fairly quickly. But I forgot to turn my Garmin on as I entered transition and it kept on searching for a signal as I was moving. I've already activated it at the bike racks earlier in the morning and usually it would have located a signal fairly quickly if I had turned it on closer to transition. But it didn't bother me that much and I just focused on racing - searching for those from my age group ahead of me.

The run course was 3 laps and sort of like T shaped. It was mixed with grassy areas and pavement. There were some small rolling hills on the pavement, nothing major but can be challenging on tired legs. With the change in terrain and surface, I felt a cramp coming on in my left inner quad at one point but I managed it by changing my stride length and it soon went away. The weather wasn't too bad, it stopped raining and it was a fair bit overcast. The volunteers and drinks stations were awesome with plenty of flavours in electrolytes to choose from. Local residents were great too showering us with their garden hose. 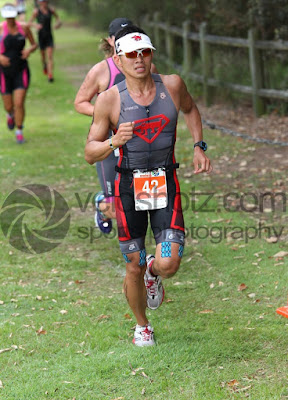 I managed to overtake one from my age group towards the end of the first lap. My watch finally picked up a signal as I got close to transition. Li-Ann came out to watch and she was cheering me on, just before I passed the Red Dog tent and got cheered again - double boost! My second lap was a fair bit slower and by the third, I was just trying to survive! Don't know why, but can't seem to find my running mojo lately.

My run split was 1:42:50, a far cry from my intended 1:35 but it was all I could give that day. I slowed down by about 2 minutes each lap, which was pretty significant over a 7km distance per lap. But I actually ran myself to 5th place in my age group, so relatively I didn't do too bad and gained a few more places. My overall placing was 30th. Full results here. 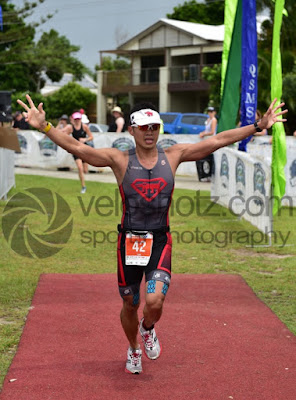 My overall time was 4:43:11, bettering my personal best over the half iron distance by just over 1.5 minutes. But with a current assisted swim, I may keep this off the record books for now and look to improving this time on the same course next year. And I highly recommend doing this race. A small but well organized and supported event, just how triathlon at its grassroots used to be. Something which is rare these days.

That's it for me... not sure when will my next report be. Maybe sooner, maybe later. We'll just have to wait and see! *wink*
Posted by Kevin Siah at 14:06 3 comments: Links to this post