...the day I chose to ride to in the hills, followed by an afternoon swim session.

...the day I updated my Facebook status about how well my ride went, whilst my Facebook homepage were flooded by updates of something else.

...the day that was pinned in my Facebook of an event that I replied maybe to attending, but didn't in the end.

...the day when all these happened, in a place I call home.

Photos taken from Kevin Loh's Facebook page
Bersih 3.0 rally, where people back home rallied for a clean election and a clean government (Bersih means clean in Malay). There was a gathering in Perth as well on the same day at the Malaysian embassy, but like I said I chose to go swimming instead.

To be honest, despite being very Malaysian at heart, I think I'm somewhat sheltered to happenings at home. But I am indeed proud of my fellow Malaysians for standing up for what they feel so strongly about. No, I won't put up any pictures or videos of people getting hurt during the protest, or any clips of some riots which got out of hand and somehow turned violent.

That's not the purpose of the rally. Sure things got out of hand, and without any in-depth knowledge I won't take sides or point fingers at anyone to take the blame. The rally united Malaysians from different races and different backgrounds, and I'm pretty sure the government got the message. Whether or not it translates to any changes, no one knows for sure. But the message was sent.

It's ANZAC Day today, whilst being a public holiday for most of us, it is also a day of remembrance to commemorate those who fought at Gallipoli during World War I.

It was also a great opportunity to put in some extra miles. Sandy, Steve and Adele from BYL and a few others from North Coast Tri Club met up in Sorrento for a ride up north via Marmion Avenue. I only had 2 hours of riding in my training plan but I was intending to just go with the flow, if the group decides to ride longer. Luckily, there were a few of us who also rode 2 hours, so I had some company. This is my first time riding this route and I quite enjoyed it. The roads were wide, mainly smooth and quiet - partly because of the public holiday.

Back to Sorrento beach, we did just under 2kms of swimming in our wetsuits. The guys made an observation that I was zig zagging really badly, thus losing a lot of time. I blame my foggy goggles, which I later found out that I unintentionally left it at the beach when I got home. Still, it was good to tick off a swim session on my program. Thanks guys for the great session!

It was also insightful to have a chat with a guy from North Coast Tri Club (sorry, I didn't catch your name!) who did the bike course at Cairns last year in a relay. I was advised not to go out too hard in the beginning as there are some challenging hills, but plenty of down slopes as well. But he said the course is absolutely gorgeous. Geoff Large, owner of XTR Multisports said the same yesterday when I paid the shop a visit. Yes, the idea of having the last Felt DA3 in Perth that is my size is very tempting... but I'll have to restrain myself.

After this easy week, I have 3 more big weeks and 2 weeks of taper. Time sure flies!
Posted by Kevin Siah at 15:59 No comments: Links to this post

Probably my last test race before I take on Ironman Cairns, in less than 7 weeks' time. The last time I did an Olympic Distance was 2 years ago in Port Dickson, Malaysia. I did a PB then of 2 hours 19 minutes but with a slightly under distanced run. I haven't done this Coogee course before. But being organized by Steve Doyle, I know that it will spring a couple of nasty surprises. So I went into this race with an open mind, having also done 5 hours of cycling the day before, but still keen to get a new PB as an icing on the cake.

Coogee, being 45 minutes away, and with a race start of 7am, meant that I got up just after 4am. I arrive at the race site in the dark and met John Cooke at the car park. Glad to see that he is recovering well from his crash and been back into training. The bike racks were not numbered, so we could rack anywhere just as long as we rack according to our designated area according to our race distance. This was also another test race for Sam's study, I went through the same procedure - weigh in, urine sample, power meter calibration for the bike.

I'm glad I brought my wetsuit as the weather was much cooler than it was at Hillary's but the winds were pretty still. I met up with the BYL guys at the swim warm up - Tom, Steve, Andrew and Sandy. Soon, it was time to start... but not without some drama. The race organizer Steve Doyle fell on the beach just as he was giving us our final briefing. Being the true champion that he is, he continued giving the briefing through his megaphone whilst being sprawled on the beach. We later found out that he had broken his leg and had to be taken to the hospital in an ambulance. We wish him a speedy recovery!

Back to the race start - the usual clobbering at the start of the swim. But I managed to stay in a pack that I was comfortable with. It was a rectangular course and I'm happy to swim pretty much in a straight line. The flat water helped. After the first turnaround, somehow I lost the pack and was swimming on my own most of the way. Reached the beach in just over 22 minutes and crossed the first timing mat in 23:06, totally stoked!

Was a bit slow getting the wetsuit off but no dramas with mounting the bike this time. It wasn't long into the bike course that we came to a steep but short hill, and because we had to do a small M-shape turn we had to go through it twice... in each lap... and there were 6 laps! My worn out pedals caused my left shoe to unclip a couple of times as I climbed the hill off my saddle. Throughout the ride I was looking out for my fellow BYL compatriots. Andrew was already pulling away with his quick swim. Steve caught me just as we started the 2nd lap. Tom and Sandy, who started a few minutes later with the girls, were closing in. I managed to get back into transition just before Tom. The ride was just a bit short of 40km - 39.15km according to the Garmin, including pushing the bike in and out of transition. The ride itself, I clocked 1:09:33.

Into the run, I was keen to make up places. Got into rhythm farely quickly and was averaging 4:10 per km. At this rate I, thought I might finish around 2:15 - 2:16. Andrew and Steve were already way ahead as they passed in the opposite direction. Towards the end of the first lap, the course takes us back to the beach where we started our swim. And there's where the wheels came off. It was slow and lumpy running in the sand. I could run nearer to the beach where the sand was more solid, but then I would have to avoid the tide coming in. It was probably about 700m of beach running. Tom passed me just after the we came out of the beach and said something about hating that beach. That was the last I saw of him though, as he got further and further away.

Starting the 2nd run lap, I knew it was near impossible to break a new PB. But I kept to the pace, albeit a bit slower as I was somewhat jaded by the whole thing already haha. Came to the beach again, caught up with the person in front of me, only to be outsprinted towards the last few meters before the finish. I clocked 45:55 for the run, which was about 700m longer - kinda makes up for the shorter bike course. I had a finish time of 2:21:17, pretty happy actually considering the course. I placed 8th in my age group and was 33rd overall. Well done to Steve for age group 3rd place finish and Sandy for winning hers! 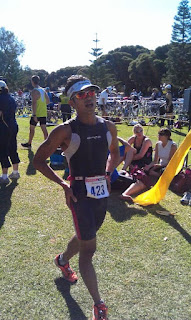 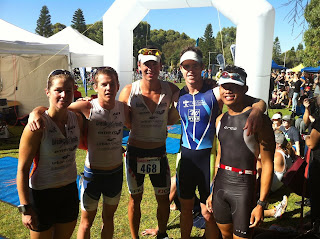 Photo credit - Tom Kroyer
After the race, I went through weigh in again, lost nearly 2kgs! And got some weird stares as I took the urine sample container into the toilet. I actually did a 90 minute run this morning post race, and felt alright apart from some tightness. Glad to be gearing up well for Cairns.
Posted by Kevin Siah at 20:15 No comments: Links to this post

Tomorrow is my mum's birthday. Some of you might know that mum taught in the same secondary school that I went to. Some people may think of it unfavourably, but I pretty much welcomed the experience. Travelling to and from school was convenient as we went together. And because the teachers who taught me were also mum's friends, somehow I felt closer to them, always dropping by school to visit when I pick mum up while I'm back home on holidays. 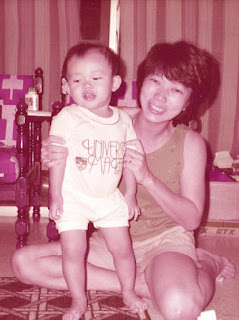 I've always said, unashamedly, that among the three of us kids, I'm mum's favourite... haha. Simply because I'm least likely to get into trouble. Although lately, my sis has been having quite a lot of female bonding with mum given she's a young lady herself now, taking her shopping and all. But I think reality is, our little brother Keith is the one getting the most attention, he's just keeping it quiet to himself! 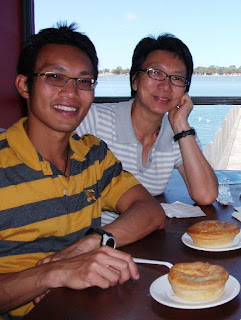 Seriously though, I'm sure mum loved us all equally, and very much. Thank you mum for bringing me to this world and bringing me up to be the person I am today. Happy birthday, mum! Enjoy yourself... and more importantly, it is one more year closer to retirement! *wink*
Posted by Kevin Siah at 14:59 No comments: Links to this post

I had a short hiatus from posting anything on this blog. We had a long 4 day weekend for Easter, which also happens to be when we planned for our pre wedding photography. Squeezing in time for Ironman training, make-up sessions (for Li-Ann, not me :P), a trip down south plus Li-Ann's parents and brother flew in for a short holiday - all into 4 days was pretty hectic!

But the results speak for themselves. Aaron Chin, our photographer and also my good friend from high school worked his magical hands on the camera. Here's a sneak preview, also can be viewed on his Facebook page. Also, many thanks to Li-Ann's family for helping out with the photo preparation and my brothers who sportingly joined us for one of the sessions.