I usually sign up for events way in advance, but the decision to do this race wasn't until a couple of weeks before. There were a few changes to my plans - first it was Port Mac 70.3, then it was an Olympic distance back in Malaysia (Malacca), then it was Kingscliff. I made several entry transfers (and flight changes as well) and by the way, NXSports who organizes Kingscliff had the best transfer policy - 100% credit to the next event! Moreton Bay tri is organized by the Event Crew, the same organizers as Queensland Triathlon Series. Held in Pelican Park, near Redcliffe, an easy 45 minutes drive from home. The event is also host to the Club Championships and doubles up as the Oceania Triathlon Union (OTU) Championships for the elites.

With the race site so close to home, my alarm was set to my daily wake up time of 4.40am. Got to the race site with plenty of time to pick up my race pack and rack my bike, only to be stopped from entering transition as the OTU race was in progress. It was at least a 20 minute wait and the queue was getting pretty long. I had a nice chat with Ian from Red Dog during the wait. There wasn't much room left on the bike racks (not individually numbered), many must have racked the day before. I quickly got my bike set up and joined the queue for the portaloos. Then, wasted no time to put my wetsuit on and only a couple minutes left before the swim start.

Mine was the first wave for the non elite non drafting Olympic Distance. It was a beach start with two lap rectangular swim course. The winds were picking up by the minute and the water was getting choppier as well. The swim to the first buoy was the toughest as the waves kept pushing us in. I had to look backwards when I breathed to ensure I didn't cop mouthfuls of saltwater from the waves. Then a right turn and we swam parallel to shore which wasn't too bad. The swim back to shore was the easiest, though I wasn't sure if I was making full use of the surf. Another right turn to start the second lap. I almost missed the buoy, with it being yellow in colour and the sun in my eyes, my yellow goggles didn't help either. Had to correct myself and added a few extra meters but still better than cutting the course short. There was no right turn at the end of the second lap and we just rode the waves back to the beach. My Garmin timed 27:09 at the first timing mat with a distance of 1,573m,which included the short run from the beach. Not great, but okay given the conditions. Also it's my first swim in the wetsuit in about 7 months, so it took me a while to get used to it again.

Pulled the wetsuit off quickly (I won't forget to do this!), wiped the sand off my feet and slipped my socks on. About to put my helmet on, only to find, to my horror - my helmet is on the floor and next to it, was the visor split in half! Nothing I could do but to delicately put the pieces together and re-attach the magnets back to my helmet. And get on with the race. My pedals weren't in the correct position when I got to the mount line, so I had to reposition them before I got on. Total time taken 1:30.

The bike course is 4 laps, with about 2/3 of each lap on the Ted Smout Memorial Bridge. And for those of you who ride along this bridge on the weekends, you would know that it is fast. That is, of course if the wind is blowing in the right direction. It was mostly head wind on the way out and tailwind on the way back. Before we end each lap, we climb a small incline just after the park and make our way back to the park before we start the next lap. There was converging traffic from cyclists of the later waves and other events, so we just had to be careful at this section of the course. By the time I started the 4th lap, it got really busy with kids and enticer distances starting the bike. I felt alright during the bike, my speed and power output was climbing steadily but I just did not have it in my legs to hammer it, balls to the wall. I finished the bike with a split of 1:07:40, averaging just over 36kph and 185 watts (NP 198). Again, not great but okay.

No dramas here. Just get in and out. Putting on the cap, sunnies and race belt on the go. Time taken 0:49.

Also 4 laps, on the footpaths along the park. I quite enjoyed the short lap and mentally, it went by quicker. And for the better, as the sun was getting brighter and temperatures were rising. It was nice to have my former club, Red Dog cheer me on as I ran past their tent. I carried over the cadence from the bike for the first km and clocked 4:05. The cadence dropped a bit after but surprisingly, the pace didn't. I was anticipating the decline as the kms go by but I was really happy that I was able to maintain the form. Apart from creeping up to 4:12 for the 3rd km, most of it were well under 4:10. Finally, I got to the finish line with a run split of 41:01 - an average pace of 4:07, my second best OD run which I was really happy with. Overall time was 2:18:10 and 9th in my age group.

Post race, I caught up with the Logan Tri Club crew at our tent for a chat. I've said this before but this would definitely be my last race in the LTC kit as I changed clubs after our house move. And no better race to do it than the Club Championships. I'll definitely consider doing this race again next year given the convenience. Overall I'm happy with my performance and there are a few things I have to work on. Next up, Ironman Cairns - only less than 2 months away! 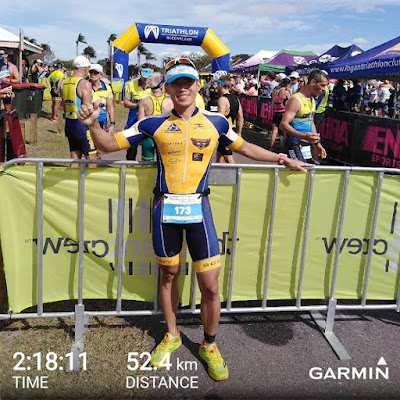 Posted by Kevin Siah at 06:56 No comments: Links to this post