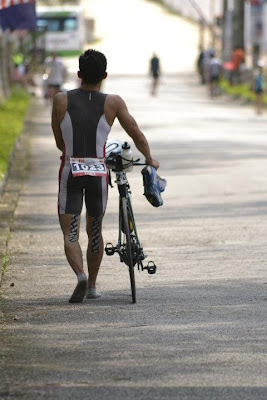 I haven't had a lot of luck with Desaru. Two years ago, I suffered bad cramps when I started the run and I walked/jogged to a 2:11 half marathon split to finish in 5:33 overall. This year, just after 30km on the bike, the rear brakes were rubbing against my wheel. I got off, had it re-aligned and got back on with the ride. I lost two minutes.

At the 50km mark, it happened again. Never mind, I'll just re-align it again. Another 2 minutes lost. It seemed that my efforts were futile, as just 10 minutes later, I heard the same screeching sound of brakes rubbing against the wheel and I could barely pedal. I was devastated. I'm sure nearly half of the competitors cycling that day could hear my screams and swears from the roadside, and I nearly did a Normann Stadler by chucking my bike onto the dirt in despair.

It's always a difficult decision to pull out from a race. Especially so when you have travelled from far, it seemed like the trip was a total waste. More heartaching was that I have literally squandered an opportunity to be amongst the prize winners in my age group, after looking at the results the next day.

However, this is, after all, a test race for my preparations for Ironman Western Australia in 10 weeks time. And I will treat it as such, and take away as much as possible, from this learning experience.

A few things indicated that my preparations were in the right direction. I felt strong riding on the undulating hills on the course. My average speed was well above what I expected. No doubt I had about another 37km to go, but I reckon I should be able to maintain that pace for another hour or so. The hill workouts that Bill prescribed did a lot more than just develop more mass on my very flat bum (per Li-Ann's observation haha). I paced a few friends on the run and I felt really comfortable with the rhythm. Sure I had a reasonably fresh pair of legs after having a free ride on the ambulance for about 30 minutes. But I also think the brick workouts are working well.

One thing to work on. I need to improve my sighting in the open water. I was swimming with the lead pack, and when I felt comfortable, I upped the pace and actually took the lead, swimming on my own. But just after the first lap, I got totally lost and went way of course, losing my lead altogether.

I'm sure there are lots more to be taken away from this experience. And there's no point ruminating about what could have been. I did after all, have a good time with friends in my home country. Now, I need to re-focus my thoughts and energy on Ironman Western Australia, which is the main goal of all the training in the past few months, and months to come anyway.

Having said that, I'm pretty keen to return next year.

I have some unfinished business with the Desaru demons that I want to settle.
Posted by Kevin Siah at 18:17 12 comments: Links to this post

The Fat Boy Challenge: A race report of a different kind

It's no secret that I'll be racing the Desaru 116 triathlon in about a week's time. It would be a good test of my Ironman preparations so far, just 10 weeks before Ironman Western Australia. Taking on the Fat Boy Challenge is probably one of the most foolish things I have ever done, especially just a week out from this race.

If you recall from my post a couple of months ago about Novembar, a quaint lunch bar, operated by a creative (and borderline maniac) proprietor Minh Van. Li-Ann's friends organized a dinner get-together on Thursday night, with one of them taking up the Fat Boy Challenge. I've been wanting to give this challenge a shot anyway, so I decided to join in too.

The Fat Boy Challenge is a 1.3kg burger consisting of 2 burger buns, 7 beef patties, 3 slices of cheese, 1 egg, 1 bacon and cooked onions. Normally priced at $28.50 on the menu, but if you take up the challenge, you only pay $1 for every minute you take to complete the burger. With the condition that you MUST finish the burger. 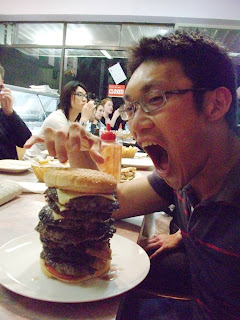 Because we had a large group and there was only one chef (Minh himself), it took a while before our burgers were served. As the others were getting their burgers brought to their table, I was beginning to feel nervous. Even the triple cheeseburger (3 beef patties, 3 slices of cheese) looked enormous, I wasn't sure if I could finish my Fat Boy!

I did a mistake by starting too quickly, both from the hunger and also the eagerness to set a good time. As it was physically impossible to eat the burger as a whole, I attacked it patty by patty. The patties are actually made from scratch, so they were stuffed with fillings, not your typical frozen thin ones.

I was averaging about 1 minute per patty up until the 4th patty, when I started experiencing some heart burn. And then, it got harder to down the patties once my stomach began to fill up. By the 6th patty, I think I hit the wall. So, I drank some water to wash it down before taking the last patty. It took me nearly 3 minutes to finish the last patty with the bun. My total time was 15 minutes and 15 seconds, hence I needed to pay $15.25. And to think the quickest time on the leaderboard to date is 6:21!

Surprisingly, my stomach held up quite well that night. The 70 minute run session I had the next morning though, wasn't a pretty sight! But I recovered well the next morning, posting my first ride in the hills under 3 hours with a 2 minute PB on the Mundaring Weir climb.

I'll be leaving for Desaru this coming Thursday night and arriving in Singapore on Friday morning. Next post shall be my Desaru race report!
Posted by Kevin Siah at 11:12 No comments: Links to this post

...we went to for the past couple of weekends.

The Rosemount Hotel in North Perth, great food (especially the rump steak!), reasonable prices. Every main meal on the menu was under $25. Our only gripe was you could only eat outdoors, which is not smoke free. 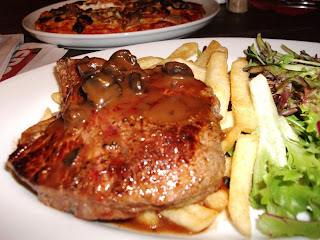 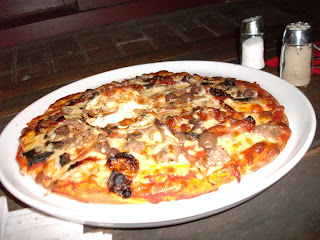 Saigon Cafe in Northbridge, we normally have our Vietnamese at Dao Vien, next to my local tri shop Runners World. But as it was closed, we reluctantly went to Saigon, as the last time we were there, the food wasn't quite to our liking. But I'm glad we visited them again, as we enjoyed our meal very much this time. I guess sometimes, we need to give second chances. 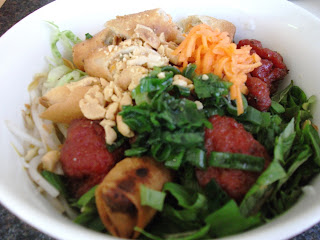 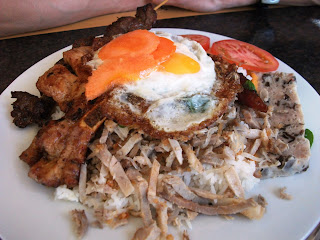 Oh, and I've FINALLY got my car back. After patiently (yes, I think I have been pretty patient) waiting for 8 weeks. But you can be very sure I won't be renewing my insurance with AAMI next time!
Posted by Kevin Siah at 15:35 2 comments: Links to this post

This run was not on my program originally. I swapped it with the Freo Fun Run the following week, as it is much closer and the entry fees were much cheaper too. Also, I didn't fancy running through the railway lines in Fremantle. So I thought I chose the softer option.

When I started my warmup at the foot paths at Lake Gwelup, the race marshalls have already lined up the course with the orange cones. I noticed the course went off the paths and into the grass and gravel. Not my preference, but we can't always stick to things we're comfortable with.

I actually felt pretty good in the warmup. The 4.5 hour ride in the hills the day before didn't seem to affect my legs that much when I did the short 30 second bursts of sprints. And because the place was only 10 minutes away, I had plenty of time to stretch, relax and get myself ready. I thought to myself, I might do a good run after all.

I was wrong again.

I probably only felt good for the first 10 minutes of the race. After that, there some twists and turns in the course, and we also came to a short climb of about 500m. The run was a 2 lap course, so I took a mental note to prepare myself when we return to that climb on the 2nd lap.

Mitch Cleasby, who pipped me at the finish line at Perth Half Marathon 4 weeks ago, overtook me just after the 4km mark. It was then where it felt like my body surrendered whatever strength it has left, leaving me to run in survival mode for the rest of the run. When I passed the halfway point, the finish clock was showing 20:30 something. I'm already 45 seconds slower than I was at the halfway point at Lake Joondalup where I did my 10km PB.

My pace slowed down even more after that, probably about 10 seconds per km. I've already taken this to be a training run. A couple more runners overtook me, then an older participant stayed with me until the last km. With the finishing in sight, suddenly my legs felt a sudden surge of energy and I picked up my pace, finishing with a bit of a sprint. I crossed the finish line in 41:53, more than 2 minutes slower than Lake Joondalup run, and with an average pace of 2-3 seconds slower per km than Perth Half Marathon.

Slightly disappointed that I wasn't able to give my best. But I guess we can't be at our best all the time. So I just have to be contented with another good hard running session in the bag.
Posted by Kevin Siah at 11:27 No comments: Links to this post