It's starting to melt! 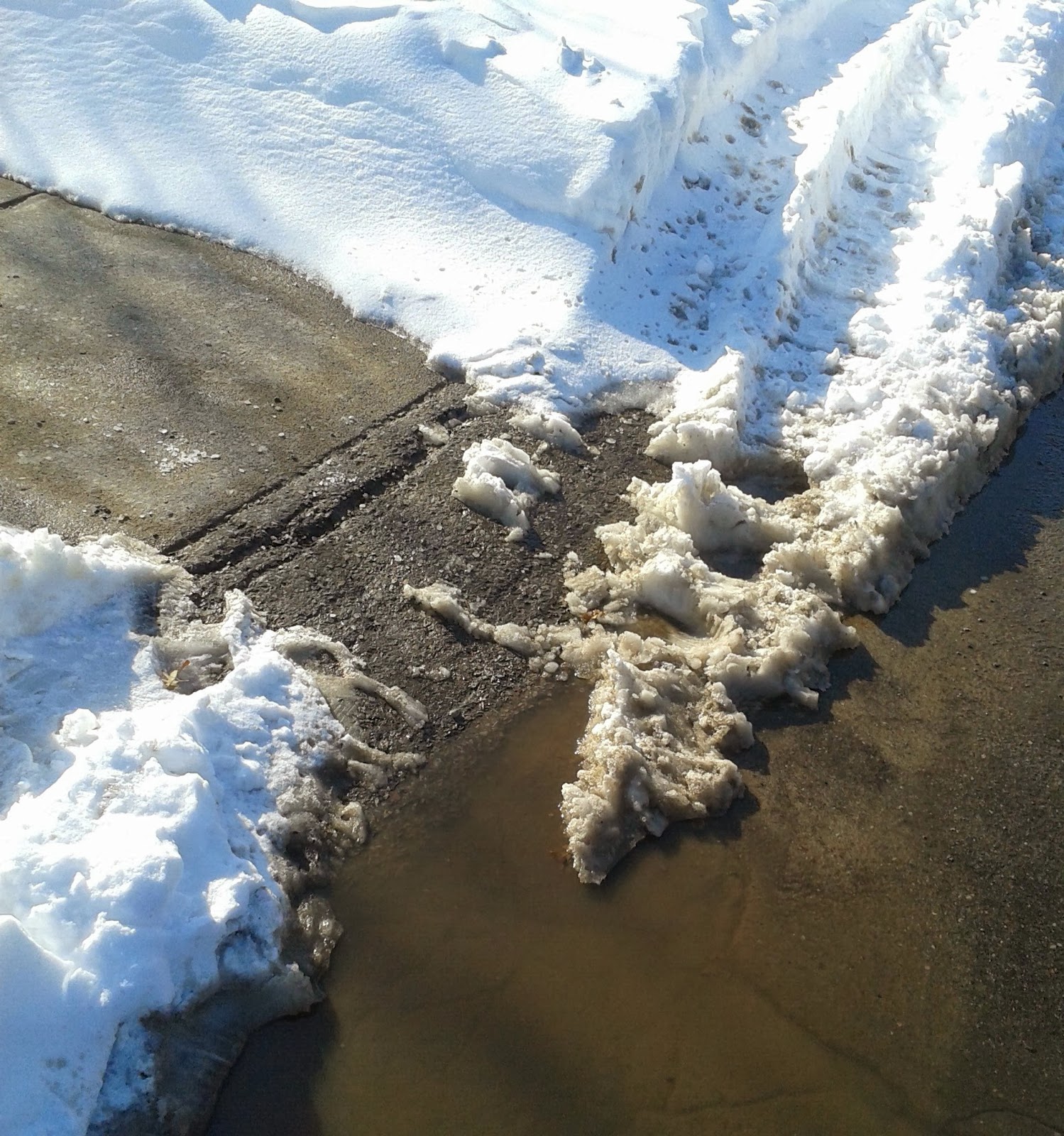 Well... not quite. But we have been getting more sunlight and the temperatures are getting a tad bit warmer. As it should be, as we are only a couple of weeks from when it officially becomes spring. But every now and then, we get a cold front and snowstorm... and it seems that winter is NEVER going away.

Yes, I am whinging, as much as I hate whingers. But I'm getting sick of running on the treadmill or riding on the trainer. I took a gamble to run outdoors this morning. It seemed mild enough at -5C. The trouble with melted snow during the day is when it gets colder overnight, it freezes turning into ice. So the paths were pretty slippery this morning. I did slip but the fall was pretty gentle, so not a scrape. It did hurt my ego though.

After having not ran outside since November, it was difficult getting back into it. I struggled with my breathing in the cold air and somehow couldn't bring my pace up. Of course, I was being cautious too with the slippery paths. But I have been slacking off in the past couple of weeks too. Only running once a week and had been nursing a cold, which I am happy to recovered from. But now my left foot is feeling a bit sore for some reason. So I'm taking it easy.

But I hope to get back on the train soon. Winter is almost ending (I hope!) and I have the Forest City Half Marathon in just over 2 month's time. I would like to start the season with at least a decent performance.
Posted by Kevin Siah at 06:05 No comments: Links to this post

What a pleasant surprise!

I received this email yesterday from Ironman mail. Usually an email from Ironman is a promotion for upcoming events and since I've more or less planned out my 2014 race calendar, I don't take much notice. But this particular email was something different. 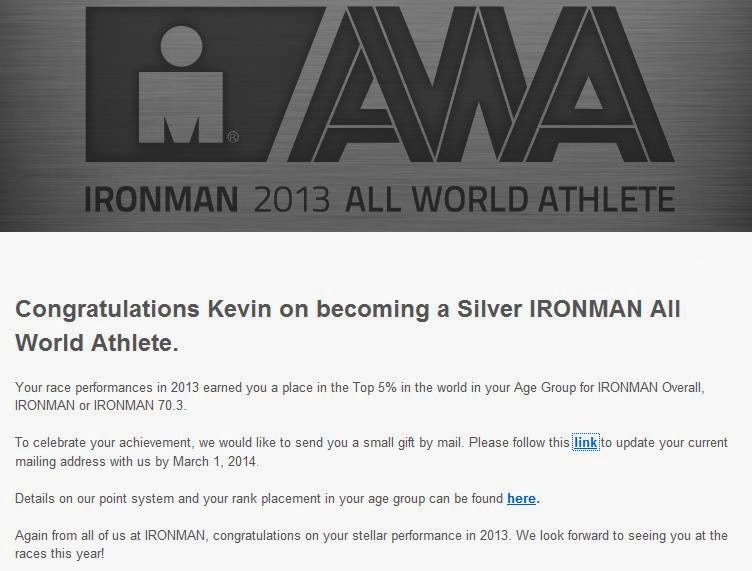 I totally didn't expect this at all! I am truly humbled. The gift may not be much and personally, I think it's great marketing to get people to do more of their events. But it's a nice encouragement to know that I'm heading in the right direction in this triathlon world. And hey, how often does Ironman give out things for free, right?

Here's the ranking system explained straight from the Ironman website.


New in 2013, The Age Group Ranking System (AGR) recognizes the best age group athletes in the world at IRONMAN and IRONMAN 70.3 races.

The new AGR system builds on the pilot program started in Europe in 2012. This year the global AGR will score IRONMAN and IRONMAN 70.3 races, but will not include 5150 Triathlon Series events.
Some important notes about the 2013 AGR:

→The AGR in no way replaces the current qualification system for the IRONMAN World Championship or IRONMAN World Championship 70.3.
→The world champion for both IRONMAN and IRONMAN 70.3 is determined at the world championship events. The top-ranked AGR athlete may not also be the world champion.
→Athletes are encouraged to double check the rankings to ensure all their results are listed. If an athlete’s name or other information is listed differently in two different races, the system might not match their race performances accurately. Any discrepancies should be reported to agr@ironman.com.

The AGR recognizes age group athletes in three different categories: IRONMAN, IRONMAN 70.3 and a combination of both race distances. The AGR is not connected to KPR (Kona Points Ranking) in any way.


The AGR allows IRONMAN and IRONMAN 70.3 athletes the opportunity to see how their race performances compare to competitors in their age group throughout the calendar year. Rankings will be updated weekly.

More info on this Age Group Ranking system here.
Posted by Kevin Siah at 10:04 No comments: Links to this post

When Li-Ann and I got married just over a year and a half ago (boy, time sure flies!), I did not actually have a best man at our wedding. I had my band of hengdais but being a Libran, I did not pick a favourite.

Well, this blog post is about my best man. The best man in my life. This is very different from a best man at someone`s wedding. And I can`t stress that enough... as very often the best man at wedding is one who makes inappropriate jokes about groom (and sometimes the bride) in an inebriated state.

The best man in my life is none other than... my dad. My dad celebrates his 59th birthday today - just a year shy from the golden 60. But it seems that my dad is a bit like Benjamin Button and appears to be aging backwards. He recently hacked 13 minutes off his PB at the Newton 25km run about 2 months ago.
And judging from his fashion sense... I guess my wife can`t complain anymore about me dressing as though I'm in my teens!
There are many of my matters which I leave to dad to take care for at home like my life insurance, income tax returns etc. Dad is also a very handy person. When things need fixing around the house, dad always know what to do. Sometimes I take these things for granted. And I do not realise it until we need to get something even as simple as drilling a hole to put a picture frame up. In fact, Li-Ann is a lot better than I am!

Happy birthday dad! And just wanted to say thank you for everything you have done for me... and still doing for me. Missing you lots and I hope to be home more often in the future to be celebrating your future birthdays with you in person.
Posted by Kevin Siah at 06:41 No comments: Links to this post