In a few days, my good friend, Eric, will be leaving Perth for good, heading back to Malaysia to start a new chapter in his life. Eric was like a brother to me, and it's not just because we have the same surname by coincidence. It was Eric who introduced me to the small circle of friends we have in Perth through the UWA International Student Service. In fact, if it wasn't for Eric, I wouldn't have met my wife, Li-Ann.

Eric was always there to lend a helping hand since my days as an opportunistic uni student, being seen at almost every workshop or seminar, just to grab some free food... up until the days of my wedding, when he was a dedicated heng dai going through the obstacles given out by the ji muis. I've also tried to convert Eric to be a triathlete, an attempt which I did not succeed very much, but he did do a sprint triathlon and later, a half marathon, which he very much enjoyed... I think.

Eric, we in Perth, will miss you very much. We wish you the very best in your future ventures! Take care, good friend.
Posted by Kevin Siah at 19:38 No comments: Links to this post

I sometimes find it hard to believe that it's been about 10 years since I've started doing triathlons. Desaru was where I did my first sprint triathlon. It was less competitive then, there was only one junior category - under 19, and I was a month shy of turning 19. Fast forward 10 years, and I'm still doing this sport, albeit a lot more seriously but still loving every bit of it.

I had a really fun group for thr 4.5 hour travel down south. David, Seh Wai, Malcalm, Elsa, Ee Wen, Kuok Yuen and Mun. You guys rocked! Thanks David for making all the arrangements and Ee Wen for driving me down. It did not only reduce the logistical stress but I also enjoyed the trip a whole lot better.

At the pre race briefing, I met a few other people whom I have only communicated via social media. Some of them would be coming down to Busselton end of the year for their first Ironman. As usual, race director Mr Chan is a real cracker when giving his briefing. We all owe it to Mr Chan and his family for putting up a superbly organized event this year. Without the Chans, there will not be any triathlons in Malaysia. My pre race nutrition plan totally went out the window. I could not resist all the local delights - roti canai, Ramly burger, chicken curry. I would have ordered some satay too if only it didn't take that long. After a hearty meal and long trip, I slept well that night.

Race morning, we woke up at 5.30am - only two hours before race start. It's always convenient when the race is hosted in a resort hotel and you're staying there. The water was a lot calmer than last year, and with a turnout of about 400 people, the swim start wasn't too crowded either. The water visibility wasn't too bad and I could actually swim in a striaght line. Unfortuntaely, the person I was drafting wasn't, and I found myself zig zagging every now and then just to stay on some feet. I came out of the water with a female relay swimmer. Clocked 35 minutes for the 2km swim, not as fast as I hoped but it was evenly split for the two laps.

On to the single, out and back 92km bike course. There were already a couple of guys in my age group who were ahead of me but I kept to my own pace. However, about 30 minutes into the ride, a pack swamped me from behind and I was trapped in it as we rode along the undulating course. So much for the draft busters. I tried to overtake them each time we got to a climb only to be caught up again on the flats. This went on for about 20 minutes and then the pack sped off just before the turnaround. I felt a bit dirty that I was somehow involved but there didn't seem much else that I could do. On the way back, a relay cyclist had the cheek to ask me if we could share the load and when I replied that I do not want to draft, he conveniently sat behind me the whole way back! Anyway, I finished the bike in 2 hours 35 minutes - about 5 minutes quicker than I expected, so I put behind everything else that happened earlier, including my new water bottle that fell off in the last 10km or so.

I nearly wiped out some of the supporters as I was dismounting my bike coming into transition, thankfully nothing serious happened. I knew I had to make up the time on the draft pack in the 22km run, but I stayed and kept the pace steady. Slowly but surely, I was able to cut the lead down on those ahead of me, overtaking one by one. The sun started coming out on the second lap of the run, and that's when the temperature rose. It was surprisingly cloudy and a bit cool during the earlier part of the day. My pace started slowing down and as much as I would love to, the first two guys in my age group were too far for me to catch. I posted 1 hour 39 minutes for the run to finish in 4:51:02 - 3rd in my age group and 6th overall. I was about 1.5 minutes after the 2nd in my age group and 4 minutes after the 1st. Kuok Yuen had severe cramps on the run but still managed to persevere to finish 5 minutes after me in 4th place after leading me in the swim and bike.

I was totally ecstatic with my result and you could see me beaming with pride as I held on to my trophy throughout the awards night. This is my first time winning a prize after doing triathlon for so long. And I have my coach, Bill and the support of my lovely wife, Li-Ann and family to thank for that. I won some prize money which paid for the accommodation, local transport, entry fee and a bit more. This race definitely makes up for the disappointment I had last year and it's a great confidence boost for Ironman WA end of the year.
Posted by Kevin Siah at 17:06 No comments: Links to this post

In two sleeps time, I'll be on a plane back to Malaysia for my third attempt at the Desaru Long Distance triathlon this Saturday. As you may recall, last year I did not finish the race due to mechanical issues on the bike and the first one I did two years earlier had me hobbling most of the run leg with severe cramps.

This year, I'm coming back with a vengeance! I'm feeling great and I'm more than happy with preparations for the past few weeks. I know this is not my A race this year, I'm still treating it like one. I even have my many pre race rituals and superstitions (trust me, I do have many of them!) ticked off including packing my lucky race T-shirts for the trip! Having it 11 weeks out from Ironman WA means I'm able to give it my all and recover in time for the big race end of the year.

The bike course has changed since last year. It's now a 1 lap - out and back route, using the same undulating course as the earlier years. Let's hope my weekly training rides in King's Park will come in useful. Until then, wish me luck! My next post shall be the race report!

Posted by Kevin Siah at 15:12 No comments: Links to this post

...the mice comes out to play.

Well, not really. Li-Ann's away in the Eastern states for just over a week - Sydney on a conference, then to Brisbane for a lab visit. Unfortunately, being the triathlete creature of habit I am, I didn't have any wild parties planned. I just stuck to my training regime. The difference is I got a lot more sleep, close to 9 hours in fact. With the 2 hour time zone difference, we talk before I have dinner, and after that I don't have much to do, so I head to bed even earlier. But that will change during the week when I have to do my own cooking after coming home from work.

This week started off with some pretty wild weather - stormy conditions with strong winds. But the timing was quite right, it stayed relatively calm whilst I was training outdoors. It has warmed up over the weekend with bright sunshine and temperatures reaching the mid 20s even before midday. It was still pretty windy though. I joined the BYL boys for a ride down the Freeway South bike path yesterday and we encountered some tough headwinds on the way back. Thanks for pushing the pace and bringing me home, boys! Though I rode about 45 minutes more than what I had on the program, it's a big confidence booster just to be able to keep up!

Less than two weeks to Desaru 116 triathlon. It's amazing how the excitement of an upcoming race just motivates you to push harder. I'm pretty impressed with the times I have been posting in the sessions this week. Still undecided whether to pack my carbon race wheels for this race. Although it's not an A race but I would still like to give it my best shot... and with my best available equipment! But as I'm also intending to put my bike up for sale, I would need to pack the 40mm clinchers that came with it. Let's see if I can manage with two pairs of wheels on board the plane.
Posted by Kevin Siah at 13:42 No comments: Links to this post

My beloved Felt B2R tri bike, bought brand new in August 2009 from Runner's World. In great condition, been well cared for and regularly serviced. Sram Red groupset, size 52cm - to suit 164cm to 173cm in height. Will throw in wireless computer with cadence, pedals and rear bottle cages, as well as unused spare aerobar spaces and stems of different sizes.

For full specs, click here. I've changed the brake levers to Sram and the bike has a new chain as well as new tyres. 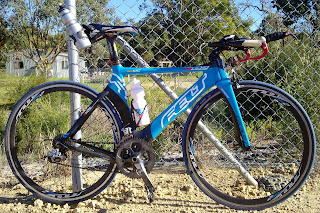 Fast, light and aero. We have shared many great memories and now, looking for it to start some new memories with a new owner. Selling for AUD2,500 or MYR8,000 - that's more than 50% off what I paid for. So make me an offer - at kskh (at) hotmail (dot) com!

On a separate note, my homeland - Malaysia celebrated it's 55th birthday on Friday. Happy birthday Malaysia! Although we have a long way to go in achieving what we are capable of as a nation, we have also come a long way to what we started out with. And, it's also fathers' day here in Australia. So here's to wishing all the dads a very happy fathers' day including my coach Bill celebrating his first father's day as a dad - very special!
Posted by Kevin Siah at 12:53 No comments: Links to this post