I've been longing to do this race since we moved to Brisbane but just didn't get to. Held in Mooloolaba, only about 80 minutes drive north from home it was a no brainer. The first year, I did Bukit Merah 113 instead in my home country, Malaysia. The second year, it hosted the 70.3 World Championships so it was by qualification only. So this time, since the stars were aligned, I signed up the moment registrations opened! Plus, it was a nice lead up race to IM Western Australia later this year.

We went up to Mooloolaba on Friday morning as most places only accepted minimum two nights stay. I would have preferred to go up on Saturday and return on Monday after the race, but I had auditors coming in that day. Yes, for those who were wondering, I do have a day time job outside of triathlon. Central Motel was about 600m walk from transition on the esplanade, which is pretty convenient. It was pretty quiet when we arrived and I took the car out to drive the hilly parts of the course to avoid any surprises on race day. In the evening, the crowd started coming in and it took me about 45 minutes in line to get my race pack collected.

The next day, we took it pretty easy. Just a short swim to test out the wetsuit. Sebastian played at the beach for a while. I checked in my bike pretty early at 11am followed by the video briefing. Had a quick lunch and then we rested at the motel for most of the afternoon. Finished up the day with my standard pre race pizza dinner.

Race morning came soon enough. My age group wave start was at 6.37am and transition closed at 5.40am. So I had some time to spare. It was already very busy in transition and this has got to be one of the tightest transition area I've ever been in. If you weren't careful, you could bump off the bike behind you, no kidding! One of the upsides of being in one of the last few waves, was the queue for the toilet is not as long. While waiting in queue, I got interviewed by a guy who was setting up a new tri website based in South Korea called Push Push Multisport. Almost had to cut short the interview as it was my turn to use the loo! Soon it was go time and I was lining myself at the beach for my wave start.

The swim is a dry land start from the beach. Then about 100-200m swim towards the first buoy and then turning right into a rectangular course in an anti clockwise direction before swimming back to beach. Only one lap. The water was relatively calm but as it was in the ocean, there were some mild waves as we started from the shore. Swimming into the sunrise with my yellow lensed goggles didn't pose too much of on issue. I did have a few gulps of sea water but I didn't panic. I swam pretty much on course except for one occasion where I mistook a lifesaver for a buoy. But luckily it didn't waste too much time. They should really consider having different coloured uniforms or buoys. It was also a confidence boost swimming past those who started in the earlier waves, you can tell from their different coloured caps. The last turn back into shore was a bit challenging, as I felt the currents pulling me away. I clocked 31:14 for the swim, which has been of my better swims recently. But I know I can do better. Hopefully joining a swim squad again will further improve my times as you can get complacent swimming on your own. 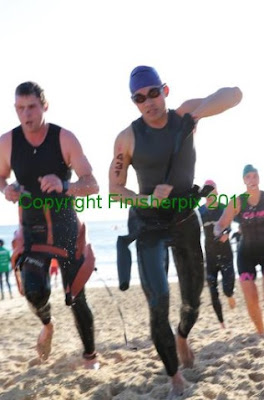 As the transition area was pretty narrow, so was the lane to run towards our bike racks. At some parts, I was able to squeeze through to overtake the person in front. At other parts, I just had to be patient and not fret over a few seconds. Wetsuit came off rather easily without any dramas. It was cold in the morning but it warmed up nicely before the swim. So my hands weren't frozen and I could put on the helmet without fumbling it. The bike mount line was a bit hairy with so many other participants around. I decided not risk it and unclipped my shoes off the pedals and clip back on again, instead of doing a fly mount. Time taken 3:02. 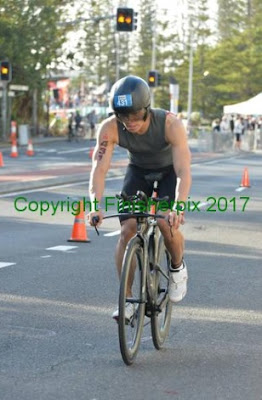 The bike course started with a few twists and turns coming out of transition and then onto the fast flat smooth roads of the Sunshine Motorway. We rode north for about 20kms before a U-turn and back, and then into the hills in Rosemount. Two laps of these hills and then 20kms back to transition. Total elevation is about 600m, which is moderately hilly for a 90km course. It wasn't too windy but there was a slight southerly, so a bit of tailwind going out and slight headwind coming back. As usual, it took me a while to get into rhythm cycling in high speeds with the deep race wheels. But once I got them going, it was nice to see the speed climbing up. Although the motorway was relatively flat, there were some gentle inclines and descends, which I kinda like as it was a nice break from being on the aero bars all the time. Just before we got to Rosemount, I averaged just under 36kph but I knew that this would drop once we hit the hills. 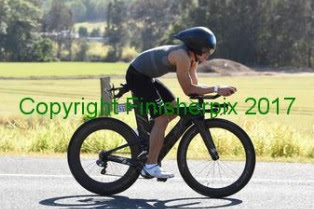 True enough, some of the climbs were pretty steep and I could see the average speed falling. This is made worse by my passive descending. There was one long descent which then goes straight into a 90 degree right turn. Luckily I checked out the course before hand and I was braking very much early on, otherwise I may have come unstuck. But I enjoyed the challenge. It is definitely more interesting than the old course which was two laps of the motorway. My average pace dropped to just under 34kph by the end of the ride. Average power was 178 watts and normalized power was 198 watts, which I was pretty happy with. Bike split was 2:38:55. I would have preferred it if it was in the low 3:30s but I was pretty satisfied with that split given the course. 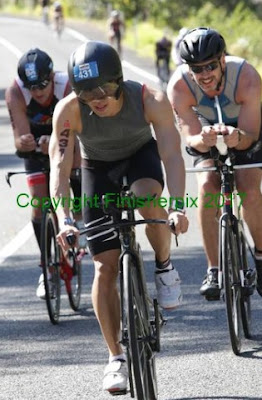 The bike dismount line appeared out of nowhere so I wasn't ready for a fly dismount. But my shoes were already unstrapped, so just remove one foot and place onto the ground first before moving the other over. Running to the bike racks with my bike was a bit of a challenge and I had to trot patiently behind those in front. Did I say before that this transition area was tight? Helmet off, shoes on, sunglasses, visor and race belt on the go. Time taken 2:01. 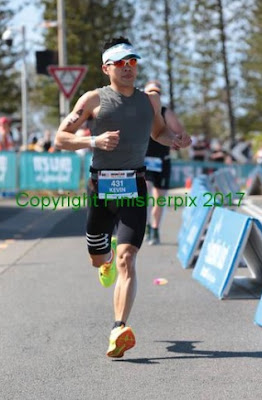 The run course is two laps, heading north towards Maroochydore and back. There is a hill about 500m long, about 1km out from transition, so we climb it four times throughout the entire course. While it was relatively cool at 20 degrees Celcius, the sun was shining in all its glory. Most parts of the course were exposed but some parts where we run through the parks were pretty shaded. My legs surprisingly felt pretty good, despite not tapering much for this race. I had high turnover and the first km I clocked 4:02! I thought I would slow down a lot after that but I settled into 4:15 pace for the next few kms until the first turnaround point. We then faced a slight headwind coming back to Mooloolaba and the pace dropped further to the 4:20s. 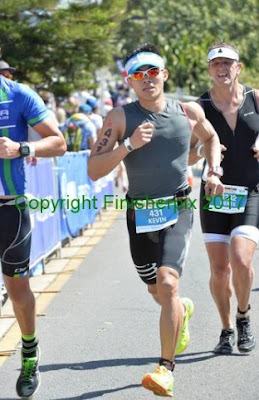 I'm still very pleased with the pace, given that I usually run around the 4:30s for my long runs and this was what I was expecting to hold. So I'm exceeding my own expectations. It was getting cheers from the Red Dog tri club tent and a handful of fellow Logan Tri Club members who came up to support us, thanks guys! My pace did start to fall towards the final few kms, with a couple of 4:40s especially on that darn hill! But I knew I was on the home stretch. Finally reached the finishing carpet leading up to the arch, saw Li-Ann cheering from the side and gave her a wave. Crossed the with a run split of 1:33:27, one of my fastest half Ironman runs. 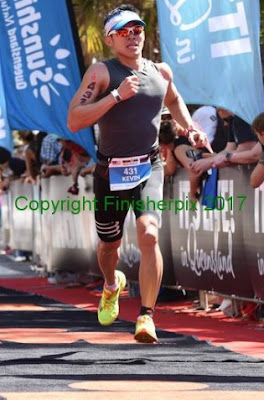 My overall time was 4:48:41, about 5 minutes slower than my half Ironman PB but I'm happy with the results given the challenging course and the focus of my training was more on the Ironman later in the year. If this was a mid term test for the final exam later, I would give myself an A minus haha. The finisher medal was a unique sunglasses shape which I thought was pretty cool. 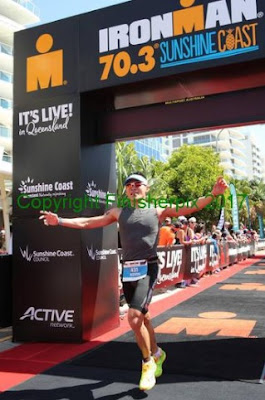 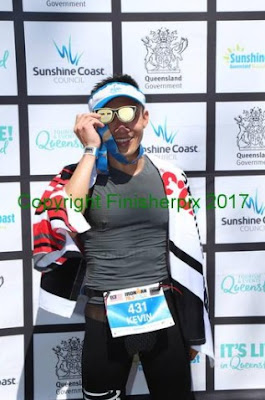 I had a well deserved lunch of burger and beer after the race. And then some gelato before heading back home. I couldn't have done this race without the support of my wife Li-Ann and son Sebastian, so big thanks to them! And thanking them in advance as the longer miles start creeping up in the upcoming months towards Ironman. I would love to come back to do this course again if the timing is right. Cheers Sunshine Coast, see you again!

Posted by Kevin Siah at 07:44 2 comments: Links to this post