Bukit Merah triathlon is the final leg of the 113 Triathlon Series. Initially, I wasn't planning on doing this race after the trauma from last year's crash. But it fitted nicely with our travel plans, being just one week before my sister's wedding. So I thought I'd give it another go. Most of you would have known by now, that I had to own up to a disqualification due to misdirection by the volunteer marshal at one of the intersections, resulting in the first few athletes having the bike distance cut short by about 10km. Nevertheless, we continued with the race and had a good training day. As such, still worthy of a race report.

We flew into Malaysia just two days before the race. This is the first time we are taking Sebastian on a plane and we were pretty nervous as to how he would react. But he was surprisingly fine and in fact, he cried more in the car on the way to the airport. The 3 hour drive to Bukit Merah the next day wasn't too bad either as he slept most of the way. We stopped by Larut Matang Hawker Centre in Taiping for some char kuay teow and I even bought another packet from another stall to take away as I wasn't quite pleased with the first one. That's the downside about racing back home as I tend to get carried away with the delicious food that I've been missing!

The drive up and down the steep and winding road leading into Bukit Merah Laketown Resort still sent shivers down my spine. Once checked in, I headed out to give that slope a try. I survived and came back in one piece but it was still as scary as hell - on one of the corners, I swerved into the opposite lane and there was a car actually coming up! Thank goodness, the driver took notice and gave me enough space.

In the evening, Sebastian hogged most of the limelight at the race briefing/welcome dinner. Race director Andy, who's a friend of mine made a nice mention of Sebastian being the youngest member of the 113 family.

Having the race hosted in the resort was so convenient - the transition area was in the carpark right outside our room! I was the first to rack my bike and then went back into the room to get on with my own business. Sebastian decided to give me a big present on the sheets, luckily we were checking out straight after the race!

There was a slight delay in the start as the athletes were already all in the water doing their warm up swim when organizers asked us to come back up onto jetty again so that they can stagger the start into separate waves of 100 athletes each. I cheekily changed my registration from age group to elite after seeing there were only two other elites. It was a nice feeling having my name announced as the elites were introduced one by one.

The three of us were positioned at the front end of the pontoon. The moment we plunged in, I tried keeping up with super fish Sawada san, but only for a few meters. My open water skills still needed a lot of work as I was zig zagging. Jason the other elite, was a slower swimmer but I allowed him to get bridge the gap each time I swam off course. The downside of swimming in a small field was that I had to do a lot more sighting. Although there were lane ropes marking the course, you had to swim pretty close to them in order to see them. The swim is a two lap rectangular course. It was only towards the second half of the first lap that I was getting the hang of it and started making a gap from Jason, while Sawada San was already miles ahead.

Being in the lake, the water was calm. Visibility wasn't too bad but it wasn't as good as last year due to more rain in the past few days. My watch showed 18 minutes after the first lap and just like last year, it was over distanced. Towards the second half of the second lap, there was a little bit more crowd, hence requiring a bit of manoeuvering. Carefully climbed up the steep wooden ramp as I got out of the water, clocking 37:57 which is about 3 minutes down from Sawada san and 4.5 minutes ahead of Jason.

A quick transition and off onto the bike course. I started the bike with the small chainring for the steep climb and then bracing myself for the fast, tight descend. But as I got onto the crest of the climb, I chickened and decided to unclip to walk down the hill. Maybe if I had alloy wheels and brakes, I would have had more confidence riding down the slope, It was only about 700m and I figured not to risk it. Once I got to the bottom of the hill, I was expecting Jason to catch me soon but he only got to me in about another 7kms in.

The bike course is lollipop shaped with two loops and turning around at the bottom of the hill, meaning only going through the hill once. The remainder of the course is mostly flat with some gentle inclines. There was a bit of headwind on the way out, not as strong as what I usually experience in Brisbane but enough to require a bit more effort to maintain the desired speed. I was racing within myself but still keen to bring the speed back up after the slow start from the hill. I got up to about 33kph average towards the end of the first lap... and that's where it happened.

At the final intersection heading back into the resort, the volunteer marshal directed me to turn left. Having analysed the course numerous times, I was pretty sure we were meant to turn right so that we can make a U-turn just before the resort. Once I turned left and cycled for a bit, I knew the course was cut short because I've missed a few landmarks at the start of the course. At this point, I thought it was a last minute modification due to traffic and safety. I was beginning to lap the later athletes, much earlier than I expected but I kept going and didn't think too much about it.

The temperature was rising towards the end of the second bike lap. I think I may not use a helmet visor for the Ironman in November to allow more ventilation. When I came back to the same intersection, there were a couple of confused athletes stopped there. This time the marshal directed us to turn right. And here's where I confirmed that I've cut the course short. The later athletes were cycling along this route and making the U-turns before going out to the second lap. When I got to the bottom of the hill, Sawada san was there talking to the officials. I guessed that he was in the same boat. Whereas, Jason took it upon himself to make the U-turn and head back out on the course. Sawada san and myself decided that we will own up to the disqualification and climbed back up the hill into transition. My bike time was 2:24:53 for 80km distance.

The competitive spirit was lost and both Sawada san and myself took our time, clarified our situation with race director Andy in transition. He allowed us to continue with the race but our results would show DSQ. I forgot to activate my watch and I waited for it to get a GPS signal before I started my run. I caught up with Sawada san before the first km and we paced each other until the first turnaround point which was just under 6kms. He asked me to go on my own as it was getting hot and he wanted to slow down. On the return, I was beginning to see other athletes in the opposite direction and I made it a point to give them a nod of encouragement in this tough part of the race.

The pace before this was just under 5 minutes but the heat was taking a toll and I started slowing down to about 5:30. Jason was coming in the opposite direction and I mentioned to him that Sawada san and myself have already been disqualified, so he's currently in first place. Onto the second lap, I was slowing down even more, getting close to 6 minutes pace. Despite being disqualified, I still wanted to cross the line first as it's something I've never experienced before although it was already irrelevant at this point. Both Sawada san and Jason were getting closer - at the last turnaround, the gaps were about 4 minutes and 7 minutes respectively.

So I dug deep, pushing the pace back towards 5:30. It didn't help that the course was overdistanced and I was still meters away from the finisher arch after clocking 22kms. Got to the finish line and the emcee obviously wasn't informed of my disqualification, announcing me as the overall winner. I didn't cross over the finishing banner but I made sure my foot just crossed the timing mat so I could get a timing reference to analyse after the race. I made an awkward side step into the recovery area with Li-Ann and Sebastian by my side. My run time was 2:01:15 with the slow transition and overall time of 5:04:06 even with a reduced bike leg, indicating how tough it was under the heat and how much I need to adjust my expectations for Ironman this November.

While it was an error made by the volunteer marshal, ultimately it is the athlete's responsibility to know the course. We didn't stay for the prize presentations. On hindsight I should have made up the remaining distance on the bike like what Jason and some of the other athletes who were also misdirected did, then I could have gotten a prize. But winning prizes isn't why I do triathlons and I was happy with how I finished the race. It was good training for the Ironman in November. Having ais kacang was good enough of a prize for me and we had a nice holiday with plenty of food in Ipoh after. 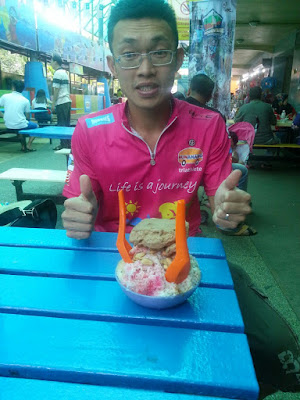 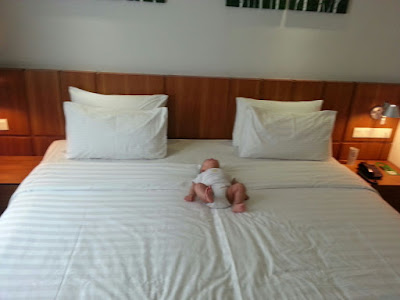 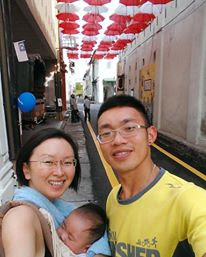 Moving on and forward to the next race... see you in Langkawi!
Posted by Kevin Siah at 11:04 No comments: Links to this post