While others are either racing the inaugural Ironman Melbourne or the Kenyir Lake Olympic Distance back home, I had a sprint distance instead. The last time I did a triathlon shorter than an Olympic Distance was probably the extra sprint at the Power Station triathlon in November 2009. But a sprint distance of 750m swim, 20km bike, 5km run... I must say, I don't think I have done this distance before. I signed up for this race as I was participating in my friend, Sam's sports science experiment. I got a couple of cool gadgets on loan as a result. 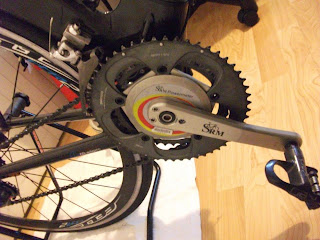 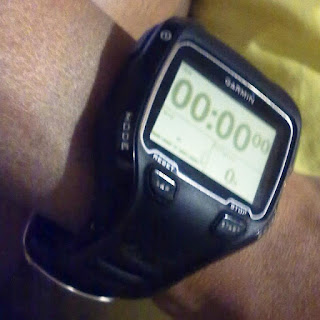 Garmin 910XT watch
I did a ride with the BYL group in the hills the day before. A ride which had me toppling off the bike as I was pedalling too slowly up a very steep hill on Hadrill Road. Nothing major, just had to do the walk of shame up the remaining of the hill. At night, Li-Ann and I were treated to a very nice Korean BBQ dinner at Hwaro Northbridge, to celebrate our friends' registration of marriage - congrats Kiez and Justin!

A late 8am race start meant that I was able to sleep in that morning. I met Sam at the registration and did a pre race weigh in as well as take a urine sample (for the purpose of the experiment! Not all participants had to do this). Then, racked my bike in transition and got down to the beach for a bit of a warm up.

The water was pretty cold but many, including myself didn't have a wetsuit on, so it was still manage-able. The water was calm and the winds were pretty light, with a bit of overcast - perfect racing weather! We were released in waves according to our age groups, there were just over 60 people in my age group. I felt really comfortable in the swim, found a pair of feet to draft. It helped that he was wearing a pair of bright compression calf sleeves!

But when I came out of the water, I was a bit disappointed that my time was over 15 minutes! Obviously, I was too comfortable during the swim! Had a pretty slow transition, guess I'm too used to having transitions in the change tents in Ironman races. Had a really embarrassing bike mount, I tried the fly mount but totally failed! Didn't fall though, just awkwardly had to kick off the ground several times before I could get going.

There were lots of cyclists on the course from the previous waves but thankfully the road was wide enough. At the turnaround point, Sandy who probably finished her long run that morning, was giving us a cheer, thanks! Surprisingly, I caught some of the guys in my age group, which rarely happens in the bike leg as it is my weak link. I must have swam really slow then!

Rode back to transition in just over 38 minutes for the bike split, didn't bother with the fly dismount this time, just slipped my feet off one-by-one with the shoes clipped in. But I had a quick T2 and got into the rhythm soon enough. Was clocking about 4:05 average, the overcast weather helped. Managed to catch a couple more guys in my age group before finishing the run split in 20:34, and overall finish time of 1:14:13. Missed my target by just over 4 minutes! I had the swim to blame but I felt strong on the bike and run. I finished 15th in my age group and 114th overall out of over 600 participants. Full results here.

After the finish, I had to weigh in again and take another urine sample. I lost about half a kilo from the race, which I'm unsure whether is a lot or not. Other than the slow swim, it looks like my training is heading in the right direction and I'm feeling tired but good at the end of each week. I have the Coogee Olympic Distance in 3 weeks' time, another new course for me.
Posted by Kevin Siah at 13:15 No comments:

It has been just over a week since the announcement of Challenge Cairns to be replaced by Ironman Cairns. This was as a result of a fallout in agreement between several parties involved, after World Triathlon Corporation - owner of the Ironman trademark and rival company of Challenge, bought over USM Events, the event organizer various multi sport events in Australia including Challenge Cairns.
The official press releases can be read here and here. If you are after the more juicy details of the fallout, Slowtwitch released a few articles and interviews here and here. As a participant affected by this change, I am somewhat disappointed as I was looking forward to the family oriented atmosphere of a Challenge series event. However, as the event organizer stilll remains the same, I'm sure a good show will put on as with most Ironman events. 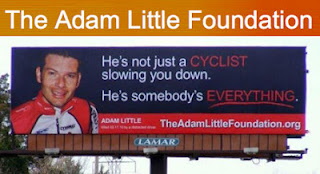 Picture taken from Slowtwitch.com
There had been a couple of disturbing news from the road lately. A cyclist in Malaysia was died in a hit-and-run accident on Sunday. My heart goes out to his family and friends. May him rest in peace. Fellow Perth triathlete, John Cooke, had a massive fall over the weekend. He required stitches and an overnight stay in the hospital. Not the most ideal situation given that Busselton 70.3 is less than 7 weeks away. We wish him the very best and a speedy recovery.

I guess each time we hit the roads for a ride, there are always risks involved, which we are willing to take. I've had my fair share of falls, but I'm grateful that none of them were serious and I'm able to come home in one piece, to my lovely wife. Ride safe, everyone.
Posted by Kevin Siah at 20:35 No comments:

Our first time celebrating Li-Ann's birthday as a married couple.

Thursday night dinner at Blue Waters Cafe, Cottesloe. Food was good, prawns were nice and fresh, pork belly was tender and crispy. Portions were a bit small for my triathlete stomach, unfortunately hehe. 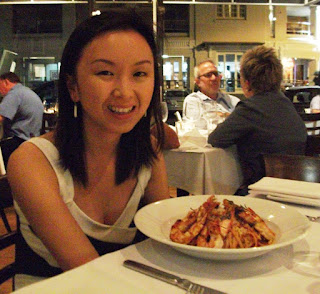 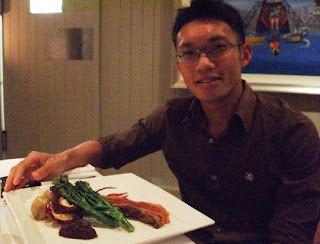 As always, Li-Ann bakes her own birthday cake. Don't look at me, she likes doing it! Chocolate brownie cake, yummz... 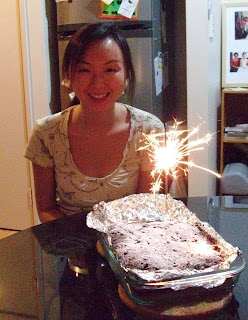 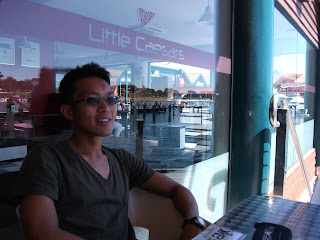 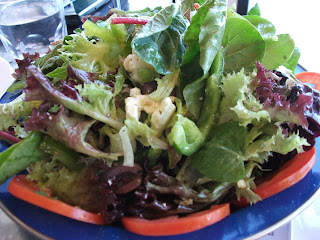 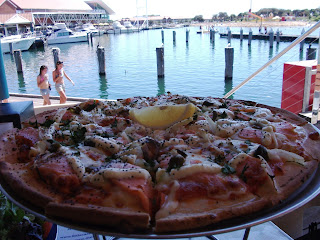 Two weeks on and I have another bike time trial. The weather in the past few days have been absolutely hot! I started my 4.5 hour ride yesterday just before 6am, went down the Freeway South bike path. It was pretty cool at first - just under 20 degrees, but soon after I made the turnaround, the temperature must have rose about 15 degrees and another 5 an hour later. It didn't help that there was a slight headwind on the way back. My legs were pretty empty towards the end of the ride, the return journey took me 5 minutes longer.

So come this morning, race day, I wasn't sure how well my legs have recovered. I had a late seeded start time of 8.32am. I planned to drop Li-Ann off at UWA on the way, but the roads were closed for the BRW Corporate Triathlon, so I took a detour to South Perth instead, where she could work on her laptop at the cafe while I had my ride.

I got to the race start with about 20 minutes to spare, quickly collected my number bib and timing chip from the registration. Luckily the rubber band for the timing chip was more flexible today, otherwise it always takes me ages to fit them on! It was also the State 40km ITT Championships, so many were in their skin tight time trial gear and disc wheels. I avoided using my aero helmet and disc wheel as I didn't want to attract unnecessary attention, quite often I end up in the bottom half of the results list!

A quick warm up and soon, it was time to go. The course is just under 10.2km and we go through it 4 times, making it a total of 40.9km. The winds were blowing from a North East direction, not very strong, but enough to pose a challenge. Plus there is a slight incline in that section of the course, which breaks the rhythm a bit. But that section is only about 3kms, and soon we'll be back in the tailwinds again.

The thing with time trials, is I always use the first lap as a gauge of what times to target for each lap. I did the first one in 17 minutes and I tried to keep it under 17 minutes from thereon. A pleasant surprise was the average speed kept above 36kph throughout, which exceeds my 35.5kph at Herne Hill two weeks ago. Coming into the last lap, I grit my teeth and just mashed the big gears, and passed the finish line in 1:07:48, an average speed of 36.2kph - a new PB for me!

Totally stoked with my results and can't wait to do another race. I'll be down for the Hillary's Sprint tri in two weeks. It's short races like these, all between 1 to 2 hours, that go a long way in keeping my progress and confidence in check, without smashing your body too much and leaving it ready to get back into training quickly.
P/S - Someone I met passed away during the week after a long battle with cancer. Her name is Yeoh, I met her at Ironman Malaysia 2010. She was there to support us, a nice and bubbly lady. Very sad news. Yeoh, may you rest in peace.
Posted by Kevin Siah at 15:19 2 comments:

I had an easy week of training last week. Well, easier week anyway. I still had over 13 hours of training but at lower intensity and with little to no hills on my rides and runs. That ended pretty quickly and Monday soon came and it was back into a full week of training. It was a public holiday on Monday - WA Labour Day. I had 4.5 hours ride on the program, in the Perth Hills. I slept in that morning, and by the time I started my ride from UWA, it was nearly 8am. The sun was already out and the temperature was rising quickly. There was quite a bit of shade in the hills, so it wasn't that bad. I went through the climbs alright and stopped by IGA in Kalamunda to fill up, bought 2 litres of apple juice and topped up my bottles, while I sat down in the shade and finish the remaining litre! As I got back to the city, my cycle computer showed over 40 degrees and I was running on empty. There was nothing left in my legs and I found myself spinning lightly. As I got back to UWA, I had 4 hours 10 minutes and 110km on the clock and decided to end my ride. That's Mother Nature for you, sometimes you just have make a judgement call as to whether to keep fighting or give in. In the grand scheme of things, the 20 minutes that I missed probably won't have a significant impact on my overall training plan but would have probably adversely affected my health if I continued. Mother Nature also showed it's fury at Lake Taupo for Ironman Zealand last weekend. There was severe gale and winds were blowing over 120kph. I'm sure many felt frustrated and disappointed when organizers decided to call off the event on Saturday, replacing it with a half Ironman on Sunday. But participants' safety and well being is paramount and should not be compromised. Well done to those who persevered with the revised race distance in still very tough conditions.
Posted by Kevin Siah at 20:54 No comments: