Hell of the West also known as the Goondi tri, held in the country town of Goondiwindi, about 4.5 hours west of Brisbane, by the Queensland and New South Wales border. With Li-Ann nearing the final few months of pregnancy, making it a bit more uncomfortable to travel, I decided to join the Red Dog boys bus this year. This made the experience a little bit more colourful, which is a massive understatement! Hats off the Trent and the crew for organizing the whole trip. Everything was well taken care of - bike transportation, accommodation and food.
It was an early race start at 5am, as with the previous years. The alarm was set at an ungodly 2.45am. I had a decent night's sleep. Myself and my roommate along with a couple of other Red Dogs were the first few ones to head to the race on our bikes, at about 3.40am. It was about 2kms away from transition. I racked my bike next to two other Red Dogs. The atmosphere was fairly relaxed. This year the swim was back in the Macintyre river, so there was no need to go to the botanical gardens. One last visit to the toilet and then it was time to make our way to the swim start.

A fairly straightforward course, single anti clockwise lap and straight out-and-back and making the U-turn just after we swim under a bridge. An interesting fact, we'll be swimming past the state border and back, so actually crossing two time zones due daylight savings in New South Wales. My swim wave was the first just after the elites. Although we could catch a very slight glimpse of daylight, it was still very dark. Having the swim in the river meant more space and I find that I didn't get as clobbered as much compared to the swim in the botanical gardens pond last year.

I wasted a bit of time trying to find a good pair of feet to draft and soon came to realization that I was better off swimming on my own. After the U-turn, it was already much brighter and I noticed there were not many in front who were within sight. I overtook a couple more and then I was pretty much on my own and had to do my own sighting. I managed to pass an elite female who started 5 minutes earlier, that gave me a bit of a confident boost. I was 15th out of the water in my age group, my watch showed around 34 minutes. I dropped my goggles during the run towards transition, a volunteer picked it up and called out, so was able to grab it off him without wasting too much time. Crossed the first timing mat in 36:49. About 4 minutes slower than last year, but typically the swim in the river tends to be a bit slower than the botanical gardens pond, so I was happy with that. 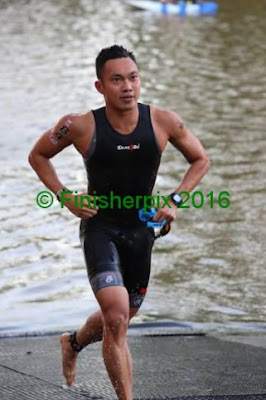 I overshot my bike rack by a couple of steps but very quickly was able to back track and get my gear on before heading out on the bike course.

Just the like swim course, the bike course is also a 1 lap, straight out and back course. Virtually flat and this year we had the rare luxury of a tailwind on the return. Last year I raced on my road bike with alloy wheels. This time, I had the whole race kit with my Felt IA and the carbon race wheels. So I planned to make some gains on the bike. It was fairly uneventful. I just knuckled down and monitored my pace and watts, just so I don't burn out. Every 10 minutes, I sat up to drink and gave myself a brief break from the aero position. A few cyclists overtook me on the way out but I rode within myself. Reached the turnaround in just under 1:09 with an average pace of 35.1kph. I'm ashamed to admit this, but I actually unclipped my shoe at the turnaround! I panicked and decided to play it safe, as to not fall over. Gotta keep working on 'em bike skills! 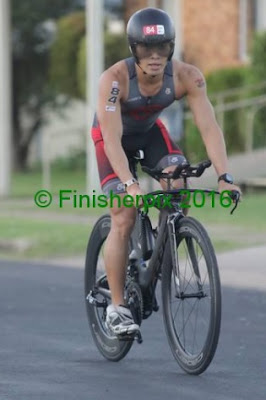 After making the U-turn, the tailwind was truly refreshing. The pace easily went above 40kph for long periods of time. There were still some sections where the road would wind a bit and we got a bit of cross wind, causing the speed to drop a bit. I was surprised to overtake a few more cyclists on the return, as I thought those ahead would be gunning it in the tailwind. Guessed I paced myself pretty well then. Upon reaching transition, my average speed built up to 37kph. I was going to make it to 2:10 for the bike split, almost 20 minutes quicker than last year and well within my 2:20 target! 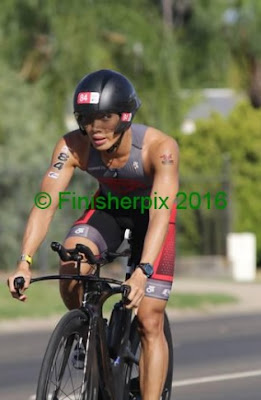 The official results showed me with a 2:12:33 bike split which includes transition time. I had to spend a few seconds removing a small stone off my foot as I put on my shoes, could have been a game changer otherwise! I was 13th off the bike in my age group, so I actually gained two places during the bike which tends to be rare for me! 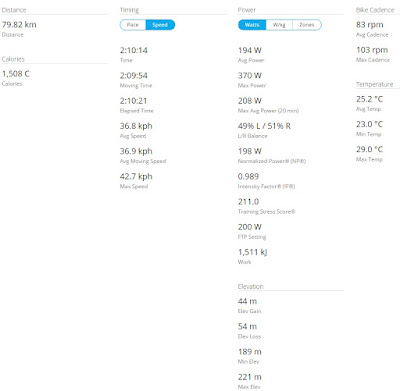 I try to be a bit more analytical with my results and I'm still learning as I go. From an average and normalized power perspective, I'm pretty happy with the results. They are just a bit lower than a 40km time trial I did in September last year. They sit around 90% of FTP of 224 (not 200 as shown above) when I did an FTP test middle of last year. Full stats here.

The run course is 3 laps, also out-and-back except for one short section where the course splits for the opposing directions before joining again. Having activated my Garmin earlier while racking the bike enabled it to pick up a signal almost instantaneously as I ran out of transition. Last year, we had to run broken up into 3.2km pre bike and 16.8km post bike. So naturally, this year's run would most likely be slower. 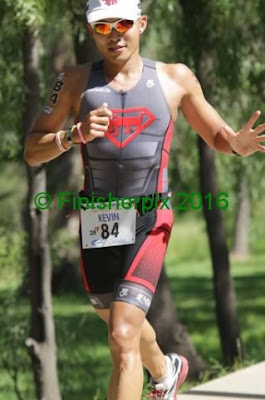 The run leg is what I look forward to in any triathlon. The support crowd is closer. Trent and the Red Dog crew were cheering at the start of each lap. I started my first km really well, 4:13 I clocked. But I knew that was too quick and I settled in to around 4:30 pace. But that was only up until the end of the first lap. The temperature started to rise very quickly after and I started slowing down, maybe I went a bit too hard on the bike. I started the second lap with a female relay runner, we stayed together for a while and kept the pace to about 4:45. 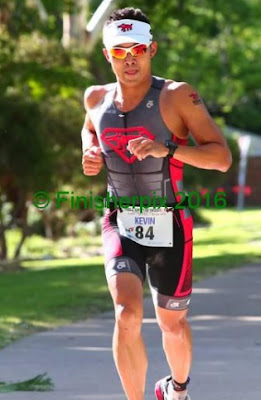 By the third lap, my lack of run fitness showed and I was into survival mode. My runs for the past few weeks have been in the 12-13 km mark. Still, I kept it to around 5 minute pace and that stayed for the remainder of the run. Reaching the final stretch, with the encouragement from the Red Dog team, I picked up the pace and sprinted towards the finishing arch. My run split was 1:33:40 and overall finish time of 4:23:03, an improvement of 7 minutes from last year. Despite my run being slower than expected, I gained a few more places in my age group and just managed to get 10th position, which is 8 position upwards from last year. Overall, I placed 50th - a 50 position jump from last year! 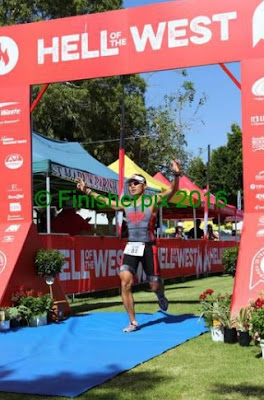 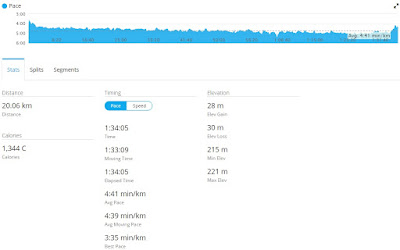 Nothing much to say, really, from the run statistics - apart from a steady decline in the pace as the day went by. I still race without a heart rate monitor, just because I don't feel comfortable wearing a chest strap. But would consider using it more often in future to get better data. Full stats here.

Considering the longer swim and tougher run, I'm pretty happy with the results. Sure we had a fairly easy bike with a tailwind on the return, which is quite rare. But it's good to know that my cycling form is getting back to where it used to be about 3 years ago, still need to work on sharpening my skills though. My running is something I've taken for granted and this race served as a reality check, that I can't be lazy anymore and need to start building up those long miles. I have the Tweed Enduro half Iron distance in a few weeks, so I need to get off my bum and start running!
The after race party was fun, to say the least and as for the trip back to Brisbane with the boys.... well, what happens on the bus, stays on the bus! Until next year!

Posted by Kevin Siah at 12:44 No comments: Links to this post