Emphasis on the word - event. Organized by the Noosa Tri Club as a training event as roads weren't closed and normal traffic rules apply. We were however, given timing chips so everyone gave their best shot. Capped at 50 entries and T Rex tri club made up more than half the numbers. Entry fees were $50 and we were given a trucker's hat and a bandana, plus sausage sizzle and cakes at the end. What more could we ask for? The timing was just right - a month out from Sunshine Coast 70.3 and I haven't been to Noosa before, so it was a no brainer for me. I even tagged on a trip to the zoo in Beerwah with my son the day before, so maybe some brownie points for me!

We stayed in Noosaville, about 4km from Lions Park in Noosa Heads. As it was still in the middle of winter, it was still dark and cold cycling to the site. My back pack was strapped on too high and the tail of my aero helmet keep getting caught in the top strap as I look up, so pretty dangerous cycling for that 15-20 minutes but I got to the site safely. Got myself registered and racked my bike, took what seemed like an eternity to put the wetsuit on, listened to the final briefing and soon it was time to go.

Deepwater start with two laps around one of the islands in the Noosa river canal. The last time I swam in my wetsuit was at Port Macquarie in early May and boy, did I struggle! I couldn't get my catch right and each stroke seemed like a fight against the water. Everyone else seemed to be getting further and further ahead. It was only on the second lap that I got into the rhythm. Finally out of the water in just over 30 minutes for 1850m recorded on the Garmin. Average pace of 1:37 per 100m, a tad bit faster than my long swims in the pool but could definitely be better.

The short transition was a nice change compared to the bigger events that I'm used to. My helmet visor was all fogged up from the morning dew so I had to give it a bit of wipe before I hopped on the bike. And then, the fairing came off a bit as I put it on and I couldn't get it back in, so had to ride the whole distance that way. The bike course is shaped like a lollipop. We rode from Noosa Heads towards Ringtail State Forest and then making a loop around Cootharaba and Borean Point before tracing our way back. Being unfamiliar with the area and the small participant numbers, it was easy to get lost but the organizers did a great job putting up signage at the main intersections so it was all good. 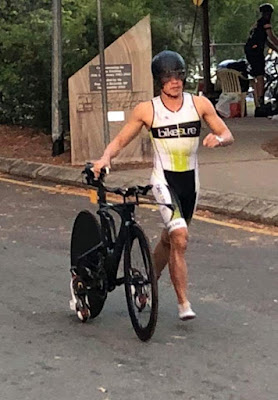 As it was just before 7am when we started the ride, it was still pretty chilly. I foolishly decided to wear a sleeveless trisuit and I did shiver in some sections where the trees were covering the sunshine. My fingers did get a bit frozen and I had some difficulty pulling out my drink bottle. Also I've had some issues with my di2 not being able to change gears whilst in the big chainring, so I had to switch to the small chainring each time I wanted to change gears. Thankfully the course wasn't too hilly, about 200m elevation in total. I should really get it fixed though. Despite all these, I had a decent ride. It was only my 4th ride back on the tri ride since Port and I was stuck behind a car going slowly through the cafe strip in the final few kms, so an average speed of 34kph was pretty good in my books. Average power was just over 180 watts, which is in line with my racing efforts. Time was 1 hour 45 minutes for the 59km distance recorded on the Garmin.

Having not run off the bike since Port, I wasn't sure what to expect. But I was pleasantly surprised. Legs were turning over well and keeping to an average pace around 4:15 per km. The course was the first few kms of the bike course and it was 3 laps. We had volunteers handing out water and electrolyte at each turnaround. While temperatures were still in their high teens or low twenties, the sun rays were out in full force and the heat was slowly kicking in. I was making good progress getting closer to the ones further ahead. Run distance was a bit short though and I finally got home in under 70 minutes for the 16.3km distance recorded on the Garmin. Overall time was 3 hours 26 minutes, which I was happy with. 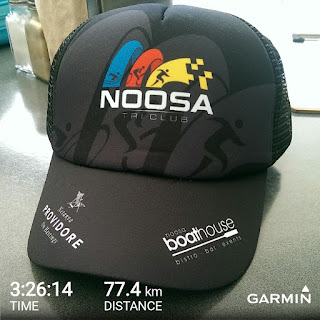 A bit of a catch up with a couple of friends and then it was time to have some brunch with my wife and son before the drive home. I truly enjoyed the event and many thanks to Noosa tri club for putting up a well organized and friendly affair! Looking forward to Sunshine Coast 70.3 in about a month's time.
Posted by Kevin Siah at 13:13 1 comment: