The Queensland Triathlon Series host 7 events each year from September to March. Two of which have the Olympic distance race, both held in Robina, about 45 minutes drive south from home. I was planning to do this event last year but I sprained my ankle just before the event, so luckily I didn't sign up otherwise I would have forfeited my entry fee. This year's event was conveniently scheduled 4 weeks after Sunshine Coast 70.3, so a nice way to end a training block by doing some heart pumping racing instead of the long hours on the saddle or on the tarmac. Plus, it was also on a day after my 34th birthday, so I figured what a great way to celebrate doing the thing I truly enjoy!

I left the house at 5am and it was an easy drive along the M1 to Robina. There were plenty of cars parked already when I got there as the kids and enticer races started first. Picked up my race pack and racked my bike. The racks weren't numbered individually, only in groups. There wasn't much space left so I managed to squeeze in somewhere. The challenge would be remembering my spot - after the swim and after the bike, next time I'll remind myself to bring something bright that sticks out. Waited in queue for one last minute visit to the portaloos and caught up with the Logan Triathlon Club crew for a quick chat at the tent. Soon it was time to head towards the water.

I was in the first of three waves for the Olympic distance at 7.12am. The swim course took place in the fresh waters surrounding Clear Island Waters. Two triangular laps in anti clockwise direction. Water temperature was around 23 degrees, so non wetsuit. It was a bit of chaos at the start, almost like a UFC match! But it settled down once we got to the first buoy and I was able to find some space. I actually welcomed some company as the buoys were pretty hard to sight and I relied on the splashes of kicking feet ahead of me to guide the way. Every now and then there would be the faster swimmers from the later wave swimming past and I would try to hold on but only for a few meters. After the final buoy on the second lap, we make a right turn towards the boat ramp that would lead us towards transition. Official swim time was 24:23 and my Garmin recorded 1,413m at 1:45 per 100m pace. It was consistent with my training pace, but as always I would have liked to have gone faster.

Good: I was able to spot my bike and didn't run past it. Not so good: I fumbled with my helmet a bit and unclipped the fairing on one side, so it was sticking out throughout the ride. Also, it took me a while to mount my bike as I was a bit nervous with the few other participants around me. But once I got into the rhythm it was okay.

A five lap bike course, shaped like a T. So even if the event is non drafting, it can get really crowded. Virtually flat with a bit of incline as we rode up and down the bridge. Conditions were very calm too with some light winds. But it was hard to get the speed up when we were making turns after every 2-3km or so. Especially for someone like myself, who is overly cautious at the u-turns and the corners. It got even worse on the last two laps when the sprint competitors who started an hour later started joining the course. Still, I tried my best to bring my average speed up. I was able to get to just above 35kph towards the end of the course. The course was a bit under distanced and my Garmin recorded just over 63 minutes for the 37.3km course. Average power was 185 watts and normalized power was 201 watts, which seemed about right for an hour's hit out. Official bike time was 1:06:32 including both transitions. 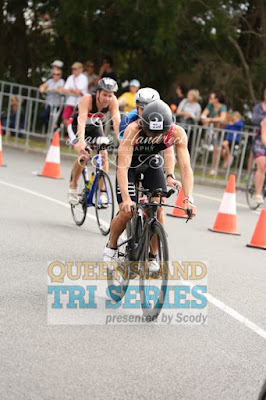 Again, I didn't run past my spot, yay! Bike racked, helmet off, shoes on and put on the rest on the go. I was on a mission to make up the positions I lost on the bike.

The L shaped run course was out-and-back, 3 laps. It had been overcast the whole morning which helped but every now and then, the sun peeked out and put a bit of burn. My legs felt surprisingly fresh and they were turning over well. First km clocked in 4:07 and I was wondering how long I could hold on. It slowed down the next km to 4:14 and I  then joined a group of 2-3 others. We pushed each other and held 4:10 pace or under for the next 5kms or so. Running past the LTC tent was motivating and the support crew gave me an extra boost - thanks guys! About 3 more kms to go, I felt some slight twitching on my left quad and I decided to slow it down a bit, so that it didn't turn into a cramp. Still, I held 4:17 pace for the next 2kms and then I was on the home stretch. I pushed out another 4:08 and then just about 150m from the finish line, sprinted and gave it all I got. Official run time was 42:11 and this time it was spot on. Overall finish time was 2:13:07 and adding 5 minutes to make up for the under distance should still equate my PB, so I was pretty satisfied with my performance. 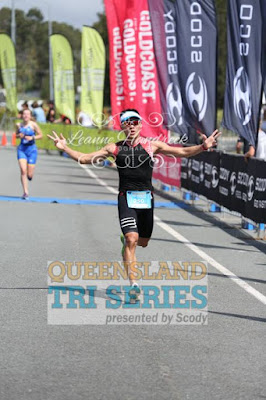 I hobbled back to the LTC tent for some sausages, bacon and eggs freshly cooked from the BBQ. It was fun day out and I truly enjoyed myself. Thanks again guys! Even though the race was less than a third of my recent weekend mileage, I'm still feeling pretty sore which goes to show how painful short but high intensity racing can be. Short is definitely not easy!
Posted by Kevin Siah at 08:00 2 comments: Links to this post