You have been stimulated!

Something I received in the mail before the weekend... 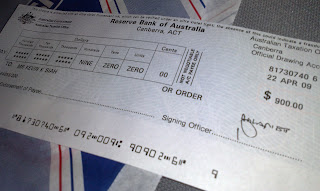 Thanks to our Prime Minister, Kevin Rudd's economic stimulus plan. After about 1.5 weeks of drafting up my organization's 2009-2010 budget, receiving this is so rewarding. Now what should I spend it on?

We had a 3 day weekend - ANZAC day to commemorate those who fought during the World War. Even during my bike ride, I had to stop on two separate occasions, as I passed by two groups observing a moment of silence to perform this honour.

Darling's dad was here to view the house, which she just put in an offer for. We always have good meals when he's around. Hehheh.

With a sub 43 minute 10km run during the week, another 29kph average 80km bike ride and a REALLY surprising 20km run in 1:27.13 on the weekend, I'm looking forward to gun down the 5 hour barrier for the Busselton Half Ironman come this Saturday morning.

After much drama, my entry to the Busselton Half Ironman was finally confirmed. *Phew* and YIPPEE!!

There were 1,100 individual entrants and 300 team entries altogether, including over 90 participants in my 25-29 age group category. Hmm, let's see if I can finish within the top half.

And there's nothing like a confirmed registration to keep me going. Saturday's bike ride got me clocking a 80.79km distance in 2:45.09, which is a 29.6kph average!

But it wasn't without it's hiccups. I suffered a flat tyre somewhere around the 38th km. I pumped some air into the tube and it didn't seem to be leaking. So, me being stingy decided to re-use the tube but I broke the pump after that (darn those plastic adapters!).

I approached two lady cyclists who were having their cool-down walk. They were nice enough to walk back to their cars and get their pump for me. I thanked them gratefully and continued my ride back, but just after 10 minutes, the tyre went flat again. My selfish decision to re-use the tube seemed like a really foolish one!

Luckily, there were many cyclists that morning, so I managed to flag down a group and use their pump. This time, with the new tube! Anyway, I've changed my tyres after the ride. The old ones were goners, filled with holes and specs of stone. I was just delaying to use my new tyres for the race.

My 6km brick run after that went pretty well too. Maybe it was due to the rest I had while fixing flat tyres, or the cool weather with minimal winds that day. Finished the run in 25.47 (average 4.18 per km) my best ever brick run since I can remember!

Sunday's 20km run caught me by surprise again. The winds were slightly stronger but still pretty mild. The sun was really glaring though. Ran the first 10km in 44.31. Thought I could run the second 10km with just a minute slower to finish under 90 minutes, but felt slightly fatigued and dehydrated from 11th km onwards.

However, my legs somehow regained it's strength after the 15th km and managed to power home the second 10km in 45.10, finishing the 20km distance in 1:29.40 (average 4.29 per km)! My first ever sub 90 minute effort since tapering for Langkawi Ironman! Maybe it was because I had breakfast before I did my run.

Then, in the afternoon, I spent it chilling out at Supreme Court Gardens for Buddha's Birthday Festival with one third of our SLB friends. Had some vegetarian food and performed prayer rituals.

As it was a hot day, we adjourned to Northbridge for some Icey Ice. Do you know that the owner of this franchise is one of the top 50 corporate clients of Commonwealth Bank?

Something to think about when I start the work week tomorrow...
Posted by Kevin Siah at 16:42 2 comments: Links to this post

Greatest teacher in my life

In just a month's time, it would be teacher's day. But today, I would like to give a special mention to the greatest teacher in my life. No, I'm not being a teacher's pet. She is none other than... MY MUM!

HAPPY BIRTHDAY, MUM! Which other teacher can be heard when she's teaching in another block? Don't play play, hehheh. Looks like I don't inherit her loud voice, but as for my sister... hmmm...

And yes, I did go to the same school my mum taught in, but it was an experience I would never exchange for anything else in the world! Other teachers are mum's friends, so each time we return to school to meet up, they really fuss about how we are, what we are doing now, when getting married etc. hehheh. 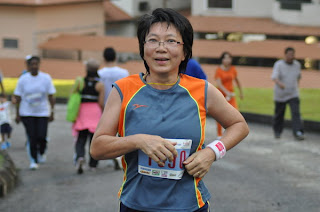 My mum, on a rare occassion, taking part in a road race. She jogs regularly though. 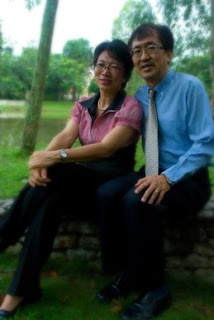 With her love of her life 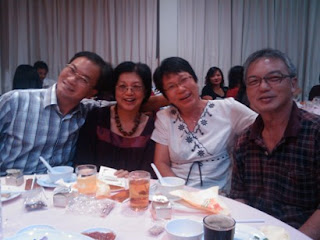 With her fun loving siblings

Enjoy your special day, mum!
Posted by Kevin Siah at 10:18 4 comments: Links to this post

Yes, over here in the land Down Under, we get a 4-day weekend! :P And it also means more opportunity to log in those additional miles for us triathletes.

Night time, we visited Aunty Seelah, a family friend of Li-Ann's. Had some delicious Vietnamese spring rolls and fried noodles.

Partly to celebrate darling's house offer being accepted. Yes, I would be paying rent to her when we move in together.

We had a walk at Cottesloe Beach to watch the sunset, followed by dinner at Mille Cafe in Inglewood. I was really happy with my peppercorn steak and darling was too, with her tortellini. 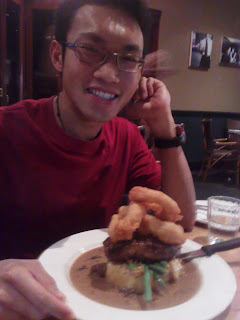 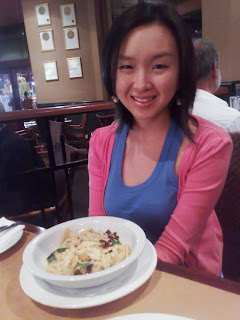 The dessert was a slight disappointment though. The mascarpone cheesecake was a sizable portion but the biscuit base was slightly bland. In Li-Ann's words... I can make better lah! 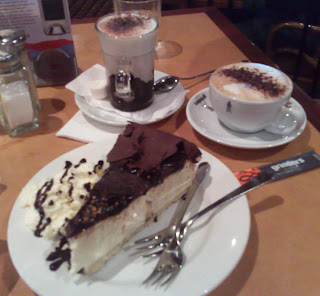 With all these food in the stomach, good thing I did some strength exercises in the morning, followed by a 1 hour 3.7km swim of various sets at midday. Although on hindsight, I should have gone outdoors and done some cycling or running, as the weather was looking really fine - clear skies with some light breeze.

Did a brick 80km ride, followed by 6km run. The winds started picking up again, just my luck! Completed the 80.87km ride in 2:49.28 (average 28.6kph) with no punctures! Thanks, Yip for the tip. I checked my front tyre and I found a tiny piece of glass caught in it. I should have done that in the first place, and saved me a few spare tubes!

I did the 6km run after in some pretty tired legs. The sun was blazing, the winds were gushing. Couldn't even keep it under 27 minutes. Finished in 27:23 (average 4:34 per km)

Had a karaoke session with SLBs at this new place, Dragon Palace in Northbridge. There weren't many choices for English songs, hence, me being a bananaman, seemed pretty lost.

A night of fun and games at the Pui sisters'. We SLBs took part in Mariokart championship! I'll say it once again, then I don't do too well in video games. Li-Ann made it to the second round though. Well done, darling! Kudos to Jer Sie for the immaculate organization. 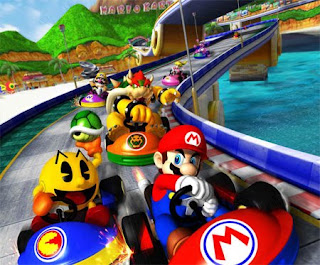 Finally received a manual entry form for the Busselton Half Ironman (before this, we could only register online). I hope this means I'm confirmed as a participant once I hand the form in. Still keeping my fingers crossed very tightly!

Did a 20km run this morning, was keen to redeem myself after yesterday's below average run. But the weather had other plans, fresh and gusty winds made my efforts seem somewhat frugal. Ran the first 10km in 44:52 and the second 10km in 46:12, finishing the total 20km distance in 1:31.04 (average 4:34 per km). Hmm, not too bad I guess.
Posted by Kevin Siah at 12:08 2 comments: Links to this post

There was no warning that the spaces were running out! And it wasn't stated what was the maximum allowable participants either! Although, yes, I should have signed up earlier when I've decided to take part, rather than wait for the closing date, 20th April.

Since I have already booked my accommodation and post race plans. But I was being cautious - in case of injury, lack of fitness etc. Didn't want to waste a A$240 entry fee!

I've sent an e-mail of appeal and also rung them up. Was told that I'm number 5 in the waiting list, so keeping my fingers crossed very tightly!
Posted by Kevin Siah at 17:22 No comments: Links to this post

I watched two movies this weekend. And oh, I was also tracking the Port Macquarie Ironman results live on Ironman.com. Chrissie Wellington is simply AMAZING! 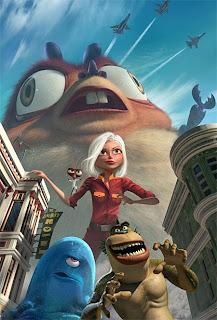 I have always been a fan of 3D animation and this was one movie that I just couldn't miss! So, just days after its release - myself, Li-Ann and her brother went to Ace Cinemas in Subiaco to catch it.

To our surprise, the cinema was full with kids - not older than 8 years old! It was a bit annoying at first, as they were making lots of noise, but that died down as the movie played along. In fact, they were quite cute at cheering the heroes (or monsters, whichever).

Fun movie, pretty funny. Quite nonsensical in some scenes. The cockroach looks just like Hugh Laurie and there were some resemblance between the 50 foot woman and Reese Witherspoon. My favourite character is BOB, hahhah. 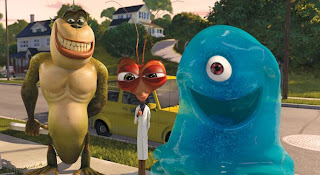 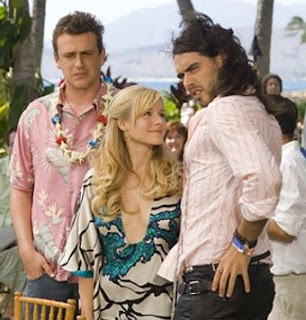 This, I watched on a downloaded DVD. And luckily I did, because I'm pretty sure almost half of it would have been censored if I watched it in Malaysian cinemas. It was obscenely funny! A bit too much of flashing by the lead male actor though.

I was a big follower of Kirsten Bell in the Veronica Mars TV series, where she played this teenage detective, solving mini cases that were somehow linked to the big mystery of the death of her best friend. Too bad the ratings weren't that good, and the network canned the show after about 5 episodes. Somehow, seeing her playing a clueless, selfish blond in this movie was a bit... awkward.

The remaining cast were your lovable jokers from 40 Year Old Virgin, Superbad and Knocked Up. Big screen newcomer Mila Kunis was hot though, hehheh. 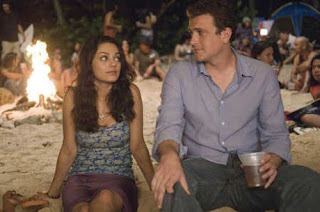 Posted by Kevin Siah at 17:03 2 comments: Links to this post