Coming into this race, I've had somewhat mixed feelings. On one hand, I was treating it as a lead up race to Ironman Malaysia, Langkawi in November and hence just had a pretty big training weekend just prior (135km bike and 24km run). Also, I continued commuting to work on two wheels 20+km each way during race week because I was too tight arsed to pay for bus fares, except for Friday as I had a massage appointment after work. On the other hand, with the revised bike course - two laps of the motorway as opposed to the previous year where we went into the valley for some hill work, it was a great opportunity to score a PB (I haven't had one for a few years now). Plus, I have been training well so I might as well give it a shot and see how far my legs can take me. 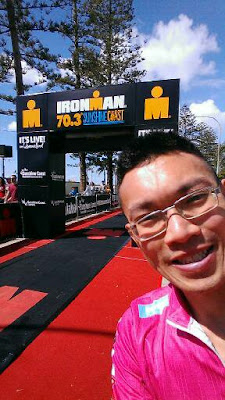 Mooloolaba is an easy 90 minute drive from home, which makes signing up for this race an easy decision (so much so that I've signed up for 2019 already)! The initial plan was to take Sebastian to SEA Life Underwater World but it was his nap time when we got there and by the time he woke up, there wasn't much time left. Still, he had fun playing at the beach and playground and I managed to get registration done while he was napping. AWA athletes had their bike racked closer to transition exit with AWA Gold being next to the Pros. My bike was a corner spot next to the mechanic tent so I had a bit more room. Dinner was a simple takeaway Domino's pizza for myself, sushi for Li-Ann and Macca's happy meal for Seb as we all had too much ice cream in the afternoon. We stayed at Twin Pines Motel, a convenient 400m walk from the esplanade where transition is. Basic but clean and spacious. 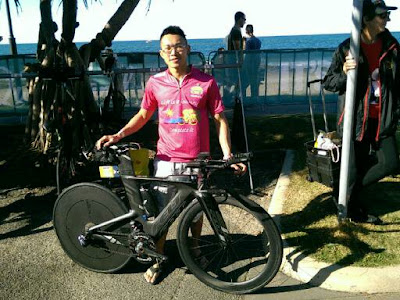 I've always been a light sleeper but I slept alright. It didn't help that it was pouring outside in the early hours of the morning. Transition area had big puddles everywhere when we got there in the morning. I had never biked without socks and I wasn't going to try it in a race, so I'll have to wear soaked socks throughout the race. Thankfully, my feet were okay and blister free - here's a plug for Steigen socks, they're awesome! Staying close by meant I was able to get most prepping done before leaving the motel - including multiple toilet visits! So after leaving my gear in transition, all I had to do was put on the wetsuit and head to the start line, no need for portaloo queues!

Unlike last year's wave starts according to age groups, it was a rolling start this year. I was able to get pretty close to the front swimmers, only 2-3 minutes from the first release. The swim course is rectangular shaped - swim out, turn right towards north, short left turn, swim back towards south and then turn left back to shore. Water was pretty choppy, I actually had time before the race to do a warm up swim but the waves kept on crashing into the beach that I decided against it. I had to modify my breathing a bit by looking backwards as I breathed to avoid drinking water when the waves were coming in. Didn't dare to look up much to sight but the water was clear enough to see other swimmers under water, so just follow along. But once we got past the first turn buoy, we were swimming along the beach which was a bit better.

The surf lifesavers had different coloured vests from the turn buoys this time which helped, so I wasn't swimming towards them rather than the turn buoys. Because of the choppy conditions, I struggled to stick to anyone's feet for long periods but still I kept pretty much on course and was very close to touching each buoy. The final turn back to the beach was pretty fun riding the surf. I came out of the water in 32:07, not great but okay. About 50 seconds slower than last year. My Garmin recorded 1,869m which was pretty close. Average pace of 1:43 per 100m which is pretty much my pool swim times but should be better with a wetsuit on. 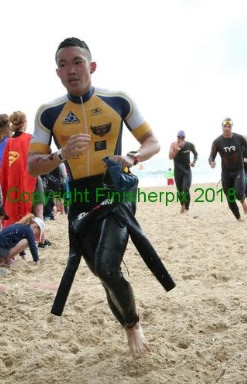 Somehow this year's transition did not feel as tight as last year. I wasn't trying to squeeze through anyone as I was running to my bike. Wetsuit took a while to remove especially over the ankle with the timing chip. But everything else went on pretty smooth... until I got to the mount line. It was pretty busy and with the wet road surface I decided not to do a fly mount just to be safe. Unclip one shoe, foot in, other foot in then clip back on. Time taken 2:57.

Bike course is two laps, mostly on the motorway with some small inclines when going up and down bridges and then some twist and turns at the beginning of each lap when we're back in town. Some short but steep climbs in town as well but overall, a fast and flat course with good road surfaces and overall elevation of about 300m to 400m. With a course like that, there are likely to be large packs. A group of 3-4 cyclists passed me and soon after the TO came and handed the back cyclist a penalty. They were arguing and obviously slowed down and I had to inch my way between them to get through. The guy clearly wasn't happy but he did't need to be a prick about it. In fact, shortly after he zoomed past me and overtaking me from the left, nearly taking me out! Apart from that, it was pretty uneventful. 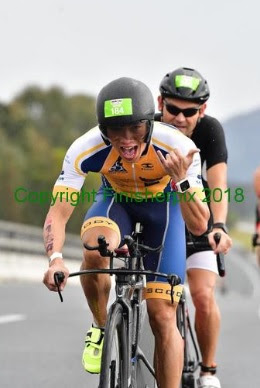 Throughout the bike course we had intermittent showers and at some stages it did get pretty heavy. Even when it wasn't raining, I got splattered on from the bikes in front as they cycle past. It was during this time I was glad to have a helmet with a visor on. Also, thankful that I reduced my tire pressure by about 10-15 psi than what I usually do. My average speed climbed up to about 37kph but it dropped towards 36kph when we got back into town. Second lap was no different and I am pleased to keep it fairly consistent. The winds played nice this year and each direction didn't feel too different. Historically it has always been a headwind on the way back. I was chasing a sub 2:30 bike split as I had never done one before, I thought I had it in the bag but the final few turns back into transition almost got me. Managed to scrape in 2:29:48! Average power was 187 watts and normalized power 205 watts, just right on the ball. 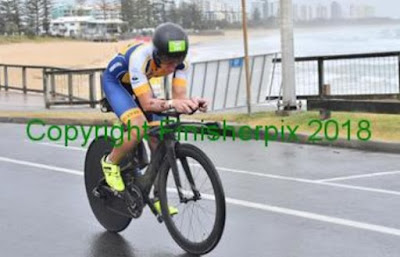 It was a bit disappointing to see so many bikes back on the racks but cycling has always been my weakest leg. I just have to make it up on the run. Rack bike, helmet off, shoes on and everything else - race bib, visor and sunglasses on the go! Time taken 1:46.

Run course is two laps, out and back from Mooloolaba to Alexandra Headland, partially on footpaths, partially on roads. Mostly flat with one long climb just after transition and we return to that climb on the way back, repeat on second lap. Total elapsed time was 3:06 after I left transition. I knew that unless I blew up, getting a PB was almost in hand. But let's aim higher for sub 4:40, which meant I had to push harder. The rain sort of stopped during the run and there was a bit of humidity coming off from the moisture off the ground. But temperatures were still pretty low, so it felt relatively cool. Still, I dunked my head with water each time I passed an aid station, which was about every 2km. I had a taste of the Isowhey electrolyte at the first station but it was too strong tasting for me. It was Coke from then on. And real Coke too! None of that fake cola stuff from Endura or other brands. 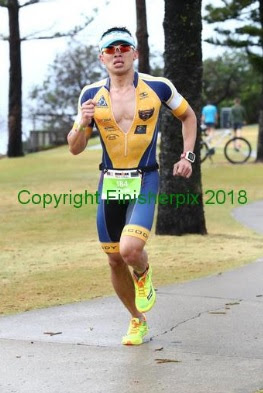 The legs felt alright though they weren't going as fast as last year when I was averaging 4:10 to 4:15 per km in the first couple of kms. But I was more consistent this year, maintaining around the 4:20 pace for most of the way, apart from the two climbs where I went into 4:30. Getting a shout out at the end of the first lap from Joel the announcer, former Reddog member like myself gave me a bit of a boost. Li-Ann and Seb was there too and so was Anthony and Greg from LTC. Trent and Rosie at the Reddog tent also cheered me as I ran past. And along the way, Kirstine, Philippe (who scored a 70.3 World Championship slot, massive congrats!) and Nathan out on course gave kudos. All these gestures while they may seem small, they definitely gave me a lift. And I sure needed that as I was very much in the hurt locker, chasing that sub 4:40 finish time. 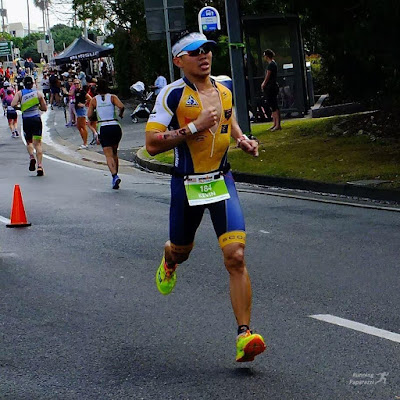 
Post race celebration was a pretty quiet affair. Li-Ann and Sebastian watched me finish but the poor kid was so tired that he fell asleep right after! I met them at the Good Bar for burger and beer before adjourning to Macca's again for a Happy Meal for Seb. I'm ever so grateful to have them as my support network, while Ironman is an individual sport, the journey definitely takes more than an individual and lots of sacrifices from their end as well. And big kudos to the volunteers, officials and crew for braving the rain for this ironically, not-so-sunny Sunshine Coast event. While the athletes can dry up and take a warm shower after finishing, they had to stay out there until the end including packing up.  It started pouring buckets again as I was picking my bike up from transition so the dry clothes that I changed into got soaked instantly! 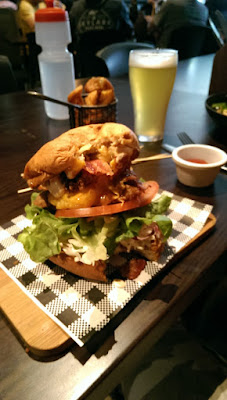 So that's a wrap for my lead up race. If it was my mid term exam, I'd give myself an A. Sure, there is always room for improvement but I surpassed my own expectations and more. I'd just have to build on this confidence going into Ironman Malaysia in 2.5 months' time. And I'll see you next year, Sunny Coast - hopefully with more sunshine! 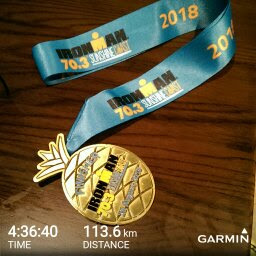