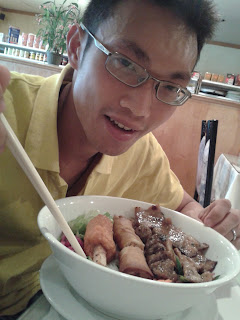 I thought I'll start off this post with a picture of me digging into the deluxe vermicelli at Que Huong Vietnamese Restaurant. We decided to have something different than our usual western diners... although we did have dinner again at Maxwell McCoys nearby on Friday night where I had another serving of a full rack of BBQ baby back ribs :)

So on Saturday I rode with Peter and Greg from Lambeth to the Fingal and Shedden area. A superb ride with a mix of flat roads and undulating terrain. We even had a couple of scares from un-chained dogs chasing us. We shared the load well, there were times when the winds were blowing against us. 114km covered in just over 3.5 hours, with an average pace of 31.5kph.

The guys were baffled that I only had a 600ml bottle of plain water throughout the whole ride... and I even had some water left - at least a quarter of the bottle, after the ride. Yeah, I guess I don't drink much... probably not enough too. It's not that I don't sweat. You should see me on the indoor trainer - my towel will be soaking wet after just an hour.

On the bike, I usually take a sip every 20 minutes or so. For some of my longer runs, I've done up to 2 hours without drinking. Of course on hotter days, I'll be drinking more frequently. And lately it has been pretty humid so I'll definitely be increasing my fluid intake. I'm not advocating my method or style of taking in fluids or nutrition. It's just something I've gotten used to. More from a lazy habit of taking the time to drink during workouts. . But I do drink plenty of water throughout the day, everyday. Ask my wife, I'm constantly filling up the water kettle to boil!

This week's training was pretty fun. Though it doesn't mean it wasn't hard. We had the first Splash N Dash for the season - a swim of about 1600m at Lake Whittaker, followed by a 5km or so run. The run hurt like hell, I've been too used to running long and slow. Still, I was glad to run a 4:08 per km pace average - good preparation for Guelph Lake OD in a couple of weeks time. The next day, we had a group ride of 40km and Coach Sheri came out to join us. Riding under the watchful hawk eyes of the coach always adds a bit of pressure.