Just like racing, it seemed like it's been a while since I've posted a race report. I can't reiterate enough how fortunate and privileged we are to be racing. Massive kudos and appreciation to everyone involved - race organizers, local council, health authorities, sanctioning bodies and volunteers to getting this event up and running whilst still keeping us safe.
I came into this race with big expectations given the solid training I had leading up to it. Depending on the conditions, I was aiming for a PB, the time to beat was 4:36:38 also in the same event in 2018. The weather forecast was 50/50 with strong wind and showers meant to clear on race day. Following advice from the surf lifesavers, the swim course was revised to a more protected section of the open water, which added about a 900m run into transition. So, these little things add up and definitely makes it difficult when you are looking for marginal gains. But it is a level playing field and everyone goes through the same course in the end of the day. 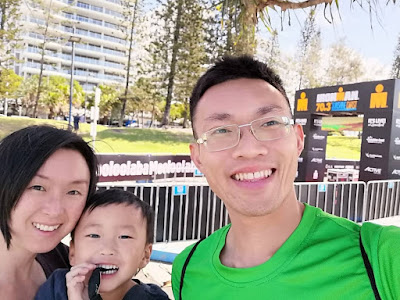 There were some subtle changes to the athlete check in and bike racking process. We had to pre book our times and sanitize our hands upon entry. There were also many stop and wait at the different points to allow the previous person to go through the process. All done in the interest of keeping us COVID safe. This year's transition was held at the Wharf, which provided much more space. I chose to rack my bike in the final slot of 4pm at the skies were looking pretty dark. It was nice to be racked second row from the front, one of the perks of being an AWA athlete. Dinner was takeaway pizza and pasta from Cala Luna in Maroochydore but we ate them at Macca's as Sebastian had a McHappy Meal. 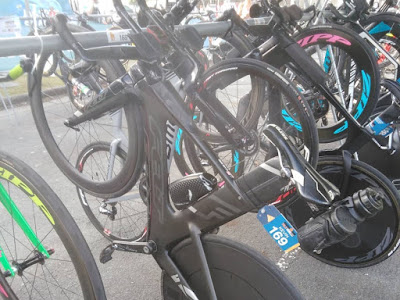 Race morning, alarm went off at 4am. But I was woken up by rain about 45 minutes earlier. Had breakfast and second toilet sit down and it was time to go, but not before kissing Li-Ann goodbye, who was also up already with all the noise I've been making. The motel was a short 5 minute walk from transition. I wiped down my bike from the rain, but it was a futile effort as it continued to showered intermittently. I probably didn't take into the account the walk to the swim start and was still waiting for the portaloos for one final go. Zipped up my wetsuit, dropped off my gear bag, bumped into Mark from South Bank tri club and walked together to the swim start. Only to notice that the pros were already starting while we were still a couple of hundred meters away from the starting area. Oh well, it's a rolling start for the age groupers anyway.
Swim 1.9km
I weave through the waiting crowd as close as I can to the starting queue. There was more stagger to the starts to give everyone more space and my watch showed 6.14am when it was my turn, about 9 minutes after the first few age groupers started. There was a bit of sweep from the waves into the beach but it wasn't extremely choppy. Definitely not calm waters but I've swam in much worse. Swim course was in anti-clockwise direction. Swim out, turn left three times and final right turn to finish somewhere midway at the beach. Throughout the swim, I didn't get to find any feet and was mostly overtaking other athletes. Guess I should have started earlier. Apart from a couple of moments where I had to stop to check my bearings as I couldn't sight properly with the waves, I kept mostly on course. The timing mat was placed immediately as we got onto the beach, which is handy. Clocked 31:48 for 1,876m according to my Garmin. An average pace of 1:41 per 100m. Only 21 seconds slower compared to last year when it was in calm waters. But I know I can do better and should be coming closer to the 30 minute mark. Just need to get more used to swimming in a wetsuit as these times are too similar to my non wetsuit times. 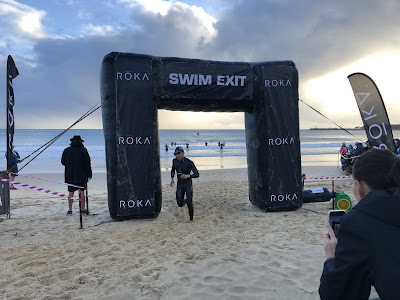 Transition 1
With the long run along the beach and into transition, it became a foot race. But it gave me time to unhinge the back of my wetsuit as the zipper can get tricky sometimes. Wetsuit came off without too much issues. Slipped on some very soggy socks. Helmet on and off we go. The bike mount area was very crowded and I pushed my bike a bit further in front for a bit of space before I mounted it. Official results had me clocking 3:03 but I had it over 5 minutes on my Garmin. I'm guessing the time must have been taken from a mat somewhere during our run into transition.
Bike 90km
Had to be really careful on the first few hundred meters of the bike. It goes along the esplanade, it was narrow and there were plenty of speed bumps. Plus the road surface was still wet from the rain. And then after there were a few climbs before we hit the Sunshine Motorway. So it wasn't until about 10 minutes into the ride where we could get some decent speed. And we sure did. A two lap course, traditionally tailwind on the way out and headwind on the return. This year was no different. Clocking close to 45kph but knowing it would slow down exponentially on the return, this was the time to patiently build up the speed and a buffer, if there is a targeted overall average speed you are after. It continued to shower intermittently but thankfully there were no huge puddles on the roads that we have to avoid. I reached an average of 37kph at the first turnaround but braced myself for the headwind to consume me on the way back. But surprisingly, I held it together, the average speed steadily decreased to 36kph and naturally with the few turns and climbs as we got back into town, it dropped a bit further to the low 35s. 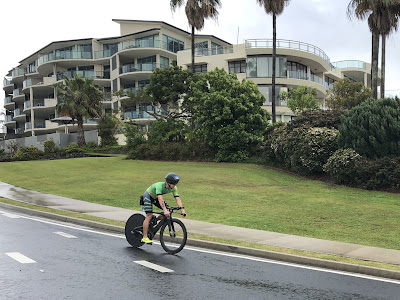 Okay, 2nd lap, time to put my foot down on the pedals if I want to achieve a sub 2:30 bike split. Knowing the descents and corners the second time round always helps and I could just put my head down and go full aero. The tailwind fun came and went. On the last return lap, one athlete passed me but I kept close. And we pretty much swapped turns for most of the way back. We did our best to keep to a legal distance but no doubt there were some moments where it was definitely questionable. In general, despite not much of a presence from the draft marshalls, I didn't see too any trains out there. I guess we were all experts in social distancing now! 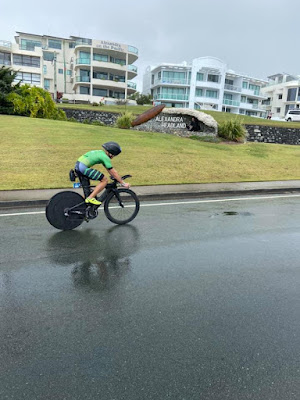 Bike split on the Garmin was 2:29:53 for 89.84km, average speed 36.0kph, average power 192 watts. Consumed three Endura gels and about three quarters of 750ml of Powerbar electrolyte, split between two bottles to keep them balanced. Official results had me doing 2:32:25, I guessed that's where the 2 minutes difference from T1 comes in.
Transition 2
Bike on, helmet off. Shoes were soaked despite covering them with a towel. Put on race belt, sunglasses and visor on the go. Time taken 1:52. Li-Ann and Sebastian were cheering me as I ran out of transition.
Run 21km
The run is usually where I look forward to making up most ground but my leg turnover felt slow. Plus I could feel some twitching in my quads and I thought I better not push it in case they turn into full blown cramps. We did the first climb and just after the 2km mark, knowing that I was no contention of breaking my PB, I decided to take a break at the portaloo. Those 45 seconds were well worth it and I felt much better after that. No doubt still keeping it steady at around the 4:30ish per km pace. It was motivating to get cheers from the South Bank tri club crew and friends from Reddog and Logan Tri Club as well. Also, getting shout outs from friends who are competing at the same time. Unfortunately, I could only respond with a smile or a thumbs up as I was hurting a bit. 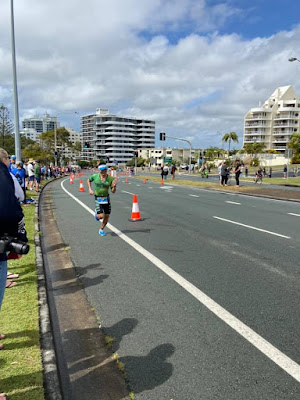 The run course changed slightly from last year and this year, another small climb was added just before the turnaround for the second lap/finish. Big kudos to the very enthusiastic volunteer directing us to that detour. The rain stopped during the run but this meant it felt a bit sticky. Volunteers were not allowed to hand out cups anymore, but the cups were well spaced and each table were labelled clearly. I did not stop at any of them and grabbed the cups as I ran. Had no issues apart from knocking off a couple of other cups at one of the stations. 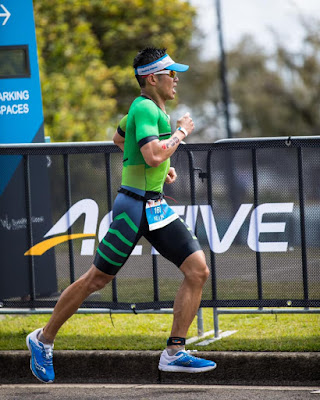 Final few kms become a survival, I was creeping close to 5 minutes per km pace. Eventually reached the finish line with a run split of 1:36:53, spot on 21km on the Garmin. Overall time was 4:46:01, surprisingly 10th place in M35-39 and 98th overall. State border closures for a Queenslander only race may have helped with that. A somewhat different experience after the finish line, where we pick up our finisher medal and towel in a bag, as opposed to having them put around us by a volunteer. 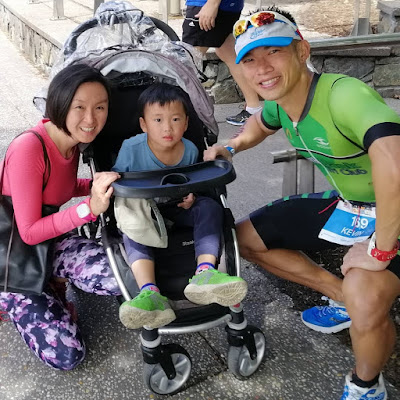 I'd be lying if I said I wasn't disappointed with my race results but I can't count my blessings enough that we had this luxury of even racing at all. I was meant to do Ironman Western Australia later in the year but that has been cancelled, so I have deferred to next year. With no major races for the rest of the year, I'm a bit at a loss now but I'm sure I'll find my next goal soon enough! 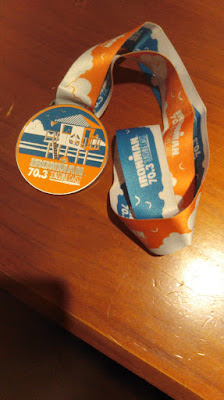