Cairns has always been one of my favourite courses, not surprisingly as it was where I achieved (and still remains) my PB of 10:15:10 in 2012. I knew it would be a hard ask to beat that now, with 7 sessions a week (2 x swim/bike/run plus 1 gym session) and peaking at just under 14 hours. With a young family, that's all I'm willing to commit - that's my choice, not an excuse. After our move to Annerley in early February, while my weekend solo training have remained relatively similar to previous builds albeit with adjustments to the routes obviously, I did the mid week intervals run with South Bank triathlon and squad swims at UQ. Having a bigger group to train with definitely helped pushed me further. So with a consistent build in the last few months, I thought I would give it a crack given the right conditions.

We arrived in Cairns on Friday and were greeted by plenty of rain. We stayed at Cairns Plaza Hotel, which was conveniently located on the run course. I did the race pack pick up while the family rested in the hotel. It rained buckets during the pasta party but it was nice to catch up with fellow Malaysian Mun Seng and other like minded people seated at our table. The next morning it showered intermittently and I was reluctant to take the bike out for a ride as I've wiped it down already (a clean bike is a fast bike... apparently). So the only pre race ride I did was the 1.5km along the Esplanade to the bike transfer drop off. For lunch, we met up with Li-Ann's relatives who are living in Cairns. Then, Li-Ann and Sebastian followed me on the shuttle bus to Palm Cove for the bike gear drop off, only to hide away from more rain. We had glimpse at the crashing waves and the palm trees being blown around by the wind. We can only hope that it would calm down for the race the next day. After that, was take away pizza for dinner before calling it an early night. 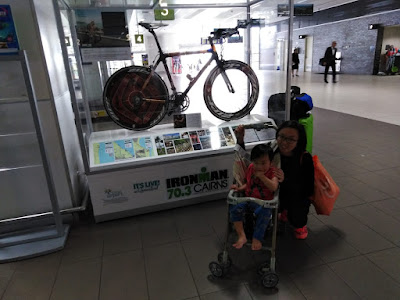 Race morning came and I surprisingly had a pretty decent night's sleep. Strolled down to the shuttle bus pick up spot and there were plenty of buses, so it was really a seamless process. I arrived at Palm Cove just before 6am and had plenty of time to get my bike set up. Only to realize that I left my phone on the bus, but nothing I could do at that stage (I did get my phone back after the race from the information booth). So just queued up for the toilets while I ate my breakfast. The queue was moving slowly and I got out of the toilet just as transition was about to close, as the 70.3 athletes were coming in from their swim. There was still a fair bit of time before my race start and I managed to get a warm up swim in and have a quiet moment to myself.

It was a rolling start on the beach, the line did take a while to move and it wasn't until 8am before I actually started. The swim course is one lap, rectangular shaped in anti clockwise direction. The water was pretty choppy, though I reckon it was worse when I did in 2016. I reckoned I probably lined myself a bit further back as I found I was overtaking quite a few swimmers even towards the later stages of the swim. Water visibility wasn't great, I couldn't check my progress very well and had to actually look up at my watch when my arms were above the water. The swim did feel long and I thought I would be close to the 70 minute mark, if not slower. I was about to give up hopes of any PB that day but surprisingly, I came out in 1:06:10, only 3 minutes down on my swim in 2012 when it was held in the calm waters off Cairns pier. That also meant that I still had a fighting chance for a PB, so had to actually work for it. Garmin recorded 3,863m so pretty much spot on. 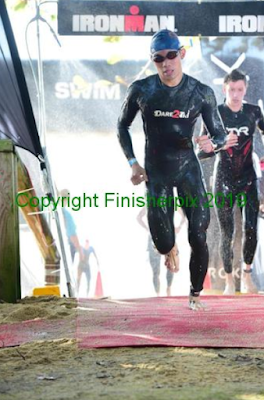 A couple of hundred meters into the change tent. I found that there weren't as many volunteers as there used to be - I had to catch the attention of one before ensuring my swim gear was packed away. Helmets were put on the bike this time, rather than in the change tent. I clipped mine over the aerobars rather than leaving it hang loose as I didn't want a repeat from Moreton Bay tri where my helmet fell off and broke its visor. My water bottle came off as I went over the first bump after the mount line but was told to stay put as a volunteer came running towards me with it, thank you kindly! Total transition time taken 3:41.

There was a slight change to the bike course compared to previous years. It still remained as two laps to Port Douglas and back. But the turnaround at Port Douglas has been moved further south (and the other turnaround at Palm Cove just after we exit from transition), means we no longer go through the Port Douglas town. Which is a shame as this is a good spot for spectators to cheer from the cafe strip. However, this change did reduce the long stretches of single lane cycling and thus probably helped to reduce the drafting. What this also meant was there was proportionately less flatter sections and more climbing sections. Garmin recorded 1,480m of elevation - about 200m more than the previous course. I was clocking between 18 to 19 minutes per 10km at the start. A bit slower than what I should be clocking if I wanted to match my 2012 split (sub 18 minutes). It was even slower on the return southbound journey with the headwind. Still, if I could run around 3.5 hours, the PB was still within reach.

But the body started hitting a wall after the second Port Douglas turnaround. The winds started picking up. I was shifting into the small chainring for every little climb, whereas on the first lap I only did that on the big climb at Rex lookout. I thought things would get better after the Rex lookout descend as it was pretty much flat all the way back to Cairns. But it was also more exposed to the headwind. I was on survival mode from then on and pretty much soft pedalled the last 30kms. I had almost all of my nutrition (4 Clif Bars, 2 bananas, 5 out of 6 gels plus some salt tablets) so it wasn't a nutrition issue. I guess whilst I have done my long rides, I haven't done any specific Ironman efforts to be able to nail it during a race. I took a brief 2 minute toilet break at the 160km aid station, just to reset myself. That helped but only for about 5 minutes or so, then I continued to roll at a pedestrian pace back to Cairns. My bike split including the break was 5:53:03. Garmin recorded 178.5km and average power at a low 144 watts. Li-Ann caught sight of me as I rolling into transition, which gave me a bit of a relief as I was afraid that she would be worried because of my delay. 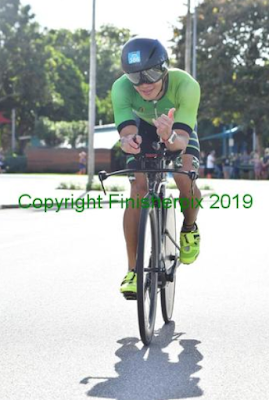 The run into the change tent was rather unpleasant on muddy grass. Thankfully I had another pair of socks to change into. Grabbed my visor, sunglasses and race number on the go. Time taken 2:08.

My legs felt heavy coming out of transition, which was quite abnormal as I'm usually sprinting to make up for lost time. But I soon settled into a rhythm, albeit a slower pace. Mentally I have given up the fight as the PB seemed no longer achievable. But I was in good spirits and soaked in the atmosphere and cheers from the crowd. The run course was changed slightly as well to 4 laps, instead of the 3 laps in previous years. This made it better to get the support from Li-Ann and Sebastian. And I took brief moments to exchange a few words each time I passed them. It rained intermittently throughout the run course and while this helped kept the body temperature cool, it made certain sections, especially on the boardwalk a bit slippery. 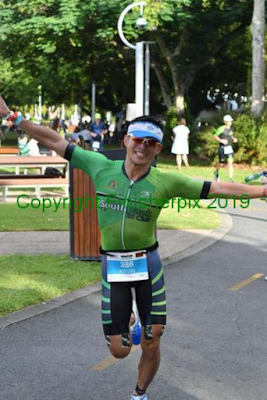 I felt comfortable throughout the run and was keeping it around the 5:30 pace per km. I ran through aid stations for most of the first two laps. It was only from the 18km onwards where I started walking through the aid stations. Even then I kept the walking very brief and there were only a couple of km splits where I was just under the 6 minute pace. As I got to the final 6km or so, I thought I'd might aim for a sub 4 hour marathon. So I dug a bit deeper and ran through the remaining aid stations. 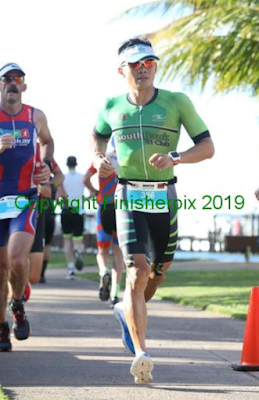 Finally, as I approached the intersection for the finishing chute, Li-Ann and Seb was there and I gave them a hug and a kiss. Before I make my towards the arch with the crowd cheering and tears in my eyes. This was my 13th Ironman finish (4th one in Cairns) and it's no different - I still sob like a sod crossing the line! Overall finish time was 11:02:02, run split was 3:57:02 with Garmin recorded distance of 41.9km. 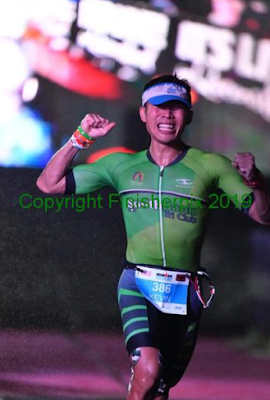 It wasn't the finish time I was hoping for but it was a finish nonetheless. And it validated my legacy spot for Kona in 2021. And I couldn't have done this without the support and sacrifice of my wife and son. Not just at this race itself or any other race but every day for the many years leading up to this and probably would be for years to come. Until I get sick of this selfish hobby of mine, which is unlikely. And to them it didn't matter whether I came in 10 hours or 17 hours. They were just happy that I was happy, doing something that truly love.

Thank you to everyone for your well wishes as well. 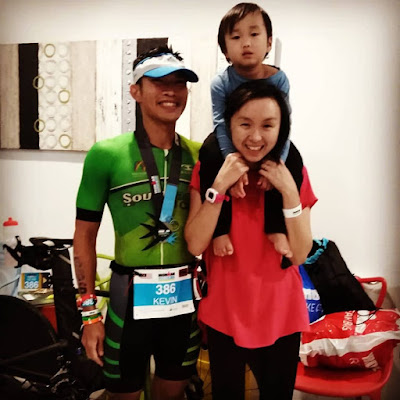