The title says it all. Although I didn't finish the race, I still did about three quarters of it and I believe it still deserves a report. Plus, I think it's a good way to pen down my thoughts so I can move on.

There's something special about racing at home that keeps on bringing me back. The feeling of having family and friends around is something that cannot be replicated elsewhere. I flew without my wife and son this time as Li-Ann had to work. But my sister Karen and brother in law Gary, who also raced, arrived shortly after. And my parents and brother Keith came two days later. My arrival was not without drama. Having not able to check in the hotel yet, I drove the rental car to the foot of Datai hill to assemble my bike and take it for a spin. Upon return, I noticed my wallet and phone were no longer in the glove compartment, so I panicked! Someone must have picked the car lock or I may have left it unlocked! With not much fuel in the car and with no money, I didn't have any choice but to head to the expo and wait for it to open so I could meet some friends. During my wait, I had a another search throughout the car and hooray, I actually placed my wallet and phone in the top compartment instead! My long flight and lack of sleep must have made me very forgetful. 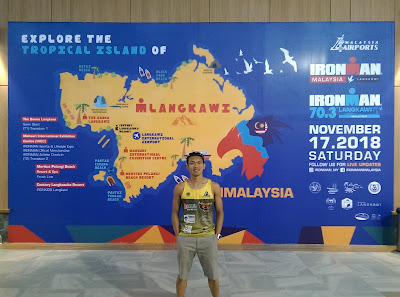 Attended the race video briefing while trying not to nod off to sleep, waited quite a bit in line for the athlete check in as their systems were slow - note to self, don't be the first few ones to check in to avoid teething issues! Caught up with a few friends then headed to the hotel. It was late afternoon by then and I thought why not just get my run over and done with so I can take a shower. Picked Karen and Gary from the airport later that night. And I was dead tired but as usual couldn't sleep very well in an unfamiliar bed for the first night. 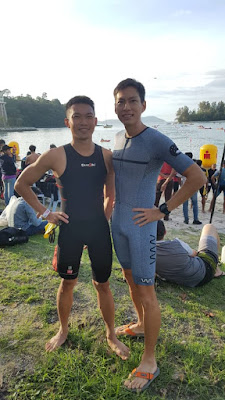 The next day was a lot more relaxed. Swim practice and then breakfast with my sis while Gary did his last brick training. I had a good massage at the expo too. A final bike tune up with the good guys of 2Escape at their make shift workshop in Four F motel had my Felt IA running smoothly. The welcome dinner at Meritus Pelangi hotel was much better this time with plenty of food and countless refills. Mum, dad and Keith arrived the next morning. We had a good lunch with friends and soon it was time to check in our bikes. A pretty mediocre dinner at the nearby Italian restaurant but it did the job. 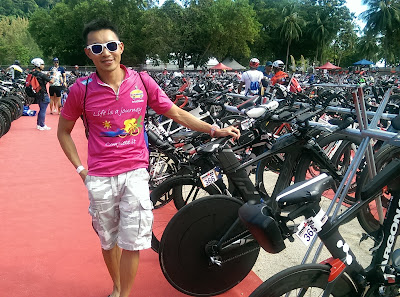 Race morning, I felt calm. It rained a bit overnight but it cleared up in the morning. The 70.3 athletes started first and our rolling start wasn't until just before 8am. I had time to queue up for the portaloos, take some pictures and do a warm up swim. Sat down beside the start line and was able to squeeze in among the first few swimmers when it was time to go.

The swim course, located at Kok Beach is two laps in a triangular shape with a short run on the beach in between the two laps. Very well marked, which has it's downside as well if you focus too much on keeping close to the line rather than swimming towards the next turn buoy. Mostly protected with slight currents but barely any waves - at least while I was swimming, I was told that the later swimmers had their swim cut short due to a brief storm.

My swim training has been pretty erratic in the last couple of months. While I've been consistently swimming, I haven't been hitting my target pace and been struggling with my strokes. Up until the final couple of weeks where I could see some improvement. Despite all this, I was pleasantly surprised with my swim pace. I was keeping well under the 1:45 pace per 100m. Didn't manage to draft off anyone but I did enjoy having my own space. Coming out to the beach between laps was a nice break and a sip of drink helped  remove the salt water taste. First lap was just under 32 minutes. Second lap pretty much the same except it took me a bit longer for the last couple of hundred meters to get to the beach. Swim split was 1:05:05, my best swim here for the last few years, so I got off to a good start! Garmin recorded just over 3.8km so it was pretty spot on. 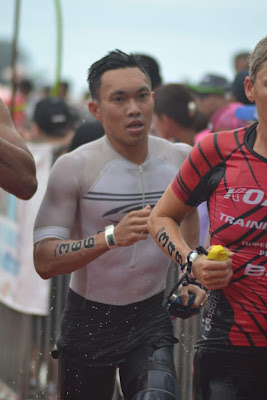 A brief run into the change tent. Towel to wipe my feet, socks on, Clif bars into back pockets, pick up the helmet and about to head off - wait! Almost forgot to remove my swimskin, luckily the person next to me did so I remembered! Ran the bike to the mount line and got on it without getting too nervous of falling over or knocking someone over. Time taken 2:42. 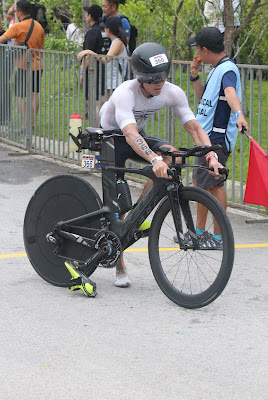 Two lap bike course with rolling hills, some false flat sections and two big climbs at the 50-60km mark (and repeat at the 150-160km mark). Different start and end points, only the final 10km is a slight detour to finish at the Mahsuri International Exhibition Centre where the expo is held. Total elevation is about 1500m and road surfaces could be patchy at some parts. Also, the course is not closed off to traffic, only the intersections are controlled - something to note for those who haven't done this race. 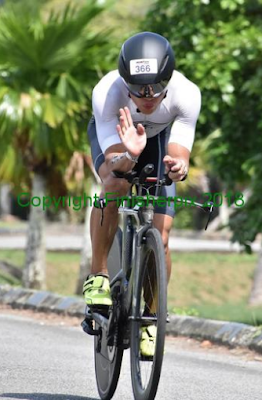 I basically did the same bike training as I did for Port Macquarie but with the added daily commute to and from work. And I have that to thank for my bike confidence. I rarely braked at the descends and corners and I was able to see the directional line ahead much better. One thing I still needed to work on though was the narrow u-turn at Datai, still had to stop and unclip one shoe before turning around. There was one short period where a brief storm erupted as I was leaving Datai, trees shook and leaves fell but luckily I did not encounter any crashes. That went away quickly and soon the sun was up in it's full heat and glory. 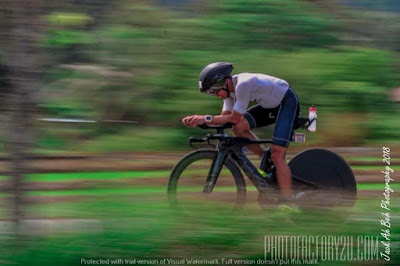 I kept the effort fairly conservative, around 150 watts. I started the bike in 3rd place in the Malaysian standings but got overtaken by two stronger cyclists around the 30km mark. Before the end of my first lap, I was called out by technical official, I was in the draft zone but I was making forward progress. I didn't notice a card before he sped off. Luckily I checked at the next penalty box and true enough was given a drafting penalty. Didn't argue just took it as a break, it was only 2 minutes - no idea why it wasn't 4 but I'll take it. It was the second break during the ride after a brief chain drop from riding with extreme gears (big chainring, big sprocket) on the second Datai climb. 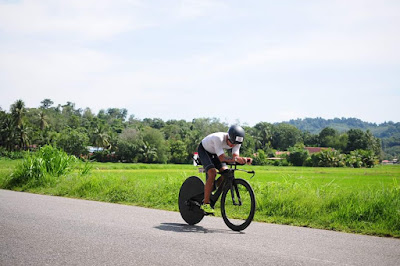 Still feeling comfortable, saw my family just before the final two big climbs and that gave me a boost. My pace was consistent up until the last 10kms where I started feeling a bit nauseous. From 32kph average it dropped a bit after the two climbs and soft pedaling to transition, to 31.5kph. Bike split was 5:46:11, pretty happy with this given the challenging course.

Immediately after I got off the bike, I could feel I definitely do not have the same sprite as I normally do. My back felt a bit stiff and my leg turnover was low. But no matter, just keep things in control. Grabbed my run bag, helmet off, changed to a fresh pair of socks, put on visor, sunnies and race belt on the go. Time taken 1:56.

Run course is 2.5 laps from the convention centre to Cenang Beach and back, repeat for another lap before finishing at Cenang Beach. The organizers changed the course slightly this year, removing the jetty break point after the Meritus Pelangi hotel turnaround and instead, extended the lap to run along the Cenang Beach restaurants and shops. Also, no running through the go-kart circuit this time as it has been closed down for reworks. 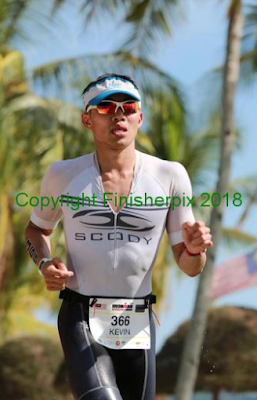 The run is usually my strongest leg but this time it was different. While I started the run slow at around 6 minutes per km pace, I was still in control. I dunked myself with a pail of water at each aid station, dranked coke and nibbled on watermelon, dunked with water again at the end. Repeat this for most of the way. Except started having some pretzels when I felt the body needed some salt and more calories. I was still in the 5th Malaysian place as I finished the first lap but the gag reflux was getting stronger. Willed myself to run another 2kms and the stomach began to churn with some dizziness getting to the head. It was then the mind talked the body to stop. I was contemplating whether or not to walk back to the expo but then my family was waiting at Cenang and it would probably take just as long for the SAG wagon to send me back than if I walked that distance. 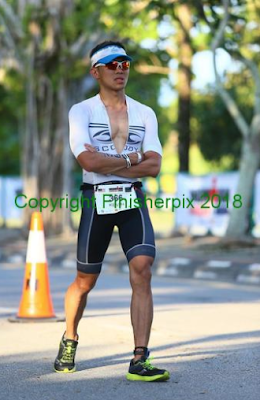 So I walked. The more I did, the more convinced I was that I was pulling out. I felt cold. I was clutching onto my guts as I could feel them pulling. Anything I put into my mouth apart from water made me gag but there was no vomit. I still kept my Garmin on so that I knew how far I had to walk. The kms went by slowly. 13 minutes, 14 minutes, 15 minutes. I have utmost respect who repeatedly race into the late hours, I can never do it - I just don't have that strength.  I sat for a while and had some syrup thanks to the Tadonamo tri club support tent. Finally after a long 6km walk, I got to my worried parents who supported my decision to quit. I went to the medic tent and got my vital signs checked - all were normal. I laid there for about half an hour before started feeling a bit better and had a bit of warm soup at athlete recovery. As the hours went by, the feeling improved but I could still feel some nausea so I reaffirm to myself that it was the right thing to do to pull out. 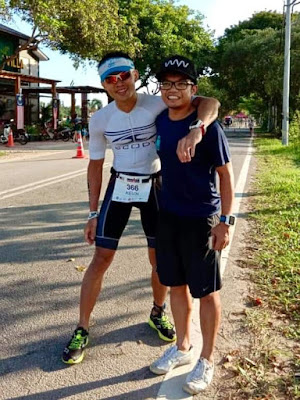 We watched Gary finish a moment later and celebrated that. The next 24 hours was a mixed bag of feelings. I knew I made the right decision and having finished 12 Ironmans already, I'm eligible for the Kona Legacy program regardless if I finished this race or not. But seeing the feeds of celebration on social media always made me wonder what if, could I, should have. Nevertheless, I did not regret this trip. I had a great time with my family and it was a good holiday for all of us. 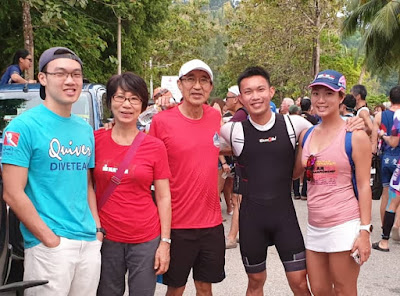 So that's wrapping the year of racing. Despite not finishing my season on a high, I did have a good season. And I'm proud of that. Moving on and looking forward to improving next season!
Posted by Kevin Siah at 09:27