There's something magical about Cairns that keeps on bringing me back. This is my 4th trip to Cairns, 3rd time for an Ironman. The decision to do this race was done rather late. I had a great race at the Kingscliff Olympic Distance in late March, falling short on my PB by just 23 seconds. I progressively increased my weekend mileage each week, with two weeks of traveling in Europe in early May but I kept myself active. The training results had been good and I had no injuries apart from some minor niggles. Still, with a short build and limiting the weekly hours to a minimum (I peaked at about 12.5 hours) so I don't miss out too much of my young son's growth, I can't help being nervous about my preparations. But with 10 Ironman finishes prior to this, I was hoping to bank a bit on my experience.

A fellow Logan Tri Club member drove to Cairns and offered to bring my bike up. I can't thank you enough Shane and Kirsty, you can't imagine how much hassle you have saved me! We caught a midday flight into Cairns. We stayed in Cascade Gardens, a nice self serviced apartment about 15 minutes walk from the race expo and finish. I had an hour before the athlete check in closed. As I was only meeting Shane the next afternoon at the bike check in at Palm Cove, I had it pretty easy going pre race. I even skipped the pre race briefings. Until I collected my bike and I realised the front brake wasn't releasing too well. I panicked a bit and luckily there was a mechanic tent at the check in. The mechanic widened the gap a bit and sprayed some oil, it wasn't 100% fixed but it will have to do. I almost missed the last shuttle bus back to Cairns! I guess a bit of stress was what I needed to get the heart rate pumping before the race!

Race morning, the alarm clock went off at 4.30am so that I could catch the 5.15am shuttle bus to Palm Cove. We decided that Li-Ann and Sebastian would not follow me that early in the morning and would only catch me after I finished the bike. It was unusually quiet in my transition area as I prepped my bike up. Then waited in queue for the portaloos for one last toilet visit. Put on my wetsuit and then it was show time!

There were some crashing waves from the ocean into the beach but the water wasn't as rough as last year. The 70.3 swimmers were done with their swim as we started ours. I lined myself up with the first wave (< 1 hour) but in hindsight I should have stuck to my own wave (1:00 to 1:07) as the rest were swimming past me as though I was laying still. The course was a rectangular one. We swim out into the ocean and then a right turn to start the rectangle and then left turns at each corner until we swim back to the beach. It was a single lap swim, changed from last year's two laps. It was difficult to find good feet to draft off due to the waves. But some managed to draft off mine and got a bit aggressive too - this one guy literally grabbed onto my ankles! I was worried my timing chip would fall off! I didn't think I swam too off course, I was reasonably close to all the buoys. As I got back to the beach at the finish, I noticed my watch was already in bike mode. Must have gotten knocked around a bit during the swim. Official results showed 1:09:18, my slowest swim to date including non wetsuit ones. It's a shame I don't have any swim data to check if the swim was a bit longer or not. Maybe I just haven't been swimming hard in enough in training. 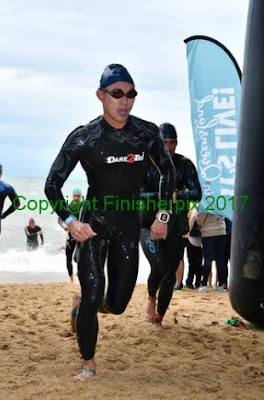 It was a pretty long run in and out of transition, I estimate about 400m in total. There weren't many volunteers in the change tent but I got my stuff sorted without too much dramas. After the race, I picked up an extra towel and arm warmers in my transition bag, with a Japanese athlete's name so I had to return them to Lost and Found. There was a bit of crowd at the bike mount line including a fall right in front of me, so I played it safe and slowly got on my bike. Total time for T1 4:54.

This was the leg I was most concerned about, being the longest part of the race. Whilst I did build up my training rides to this distance, I didn't do enough of it. Thankfully, it wasn't as windy as last year and it didn't rain as well, only the occasional drizzle every now and then. So my amateurish bike skills can take it easy around the corners. The ride heads north from Palm Cove towards Port Douglas and back, turning around in Wangetti before going back up to Port Douglas for the final turnaround and then all the way back to Cairns. It's one of the most scenic Ironman bike courses I've ever done. And with good weather, you can really appreciate it's beauty, even while racing! 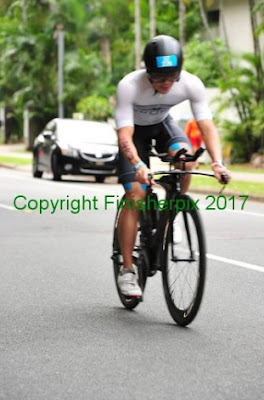 On the first ride up to Port Douglas, I averaged 33kph. There were some narrow stretches on the roads leading in and out of Port Douglas, where part of the roads were coned off for vehicles, which caused some riding packs to bunch up. I felt a bit guilty being latched on to these trains but I had no where else to go. Once we got back to the hills, the group dispersed again. The slight southerly winds brought my pace down but not by much. Li-Ann made me pack extra food in addition to my Clif bars (glad I listened!). I chose to bring some pizza bread rolls from the Woolworths bakery. Even the volunteers had a bit of food envy as I rode past! It was a nice change in taste from the Clif bars but I would choose something other than spicy pepperoni next time! 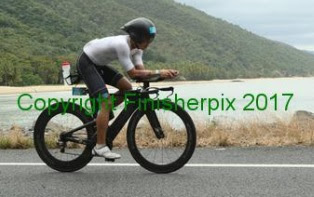 At the final turnaround at Port Douglas (thanks MC Joel for calling me out as a new dad!) and it was the home stretch. Might as well, as my energy reserves were starting to wane. More and more were passing me, including an amazing Japanese athlete with a prosthetic leg! I had my second wind as we got to Yorky's Knob at the 160km mark the speed got up again but as soon as we passed the airport, the wind was howling and I could only muster a roll back into Cairns. It was nice to see Li-Ann and Sebastian cheering as I rode towards transition and I gave them a wave. Got off the bike with a split of 5:34:52 (an average speed of 32kph), just over a minute slower than last year, which isn't too bad really. My Garmin measured the distance to be about 178kms, just like last year so a pretty fair comparison. 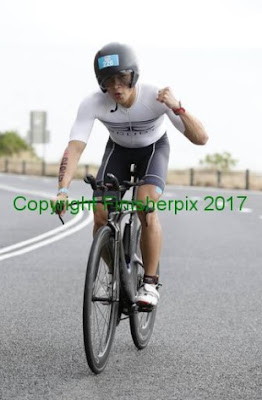 Helmet off, old socks off, new socks on. Put on running visor, sunglasses and race belt on the way out. Time taken 1:16. 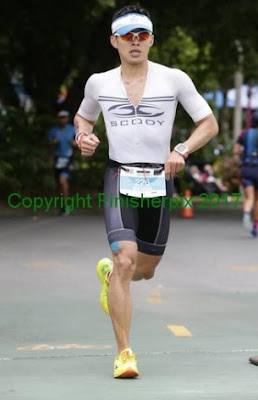 Last year it was raining as I started the run. This year it was dry but we had cloud cover throughout with relatively cool temperatures. The run course is 3 laps starting in transition and then heading south along the jetty and then north towards the airport with a slight detour into the park. My legs felt surprisingly fresh and I had good turnover. My first km I posted 4:37! But I settled into 4:45 to just under 5 minutes for pretty much the next hour or so. I was pleasantly surprised at how well I could maintain this pace. I did not stop to walk at the aid stations, just grabbed the Coke as I go. Having Li-Ann and Sebastian cheer me on both directions of the lap certainly gave me a boost. 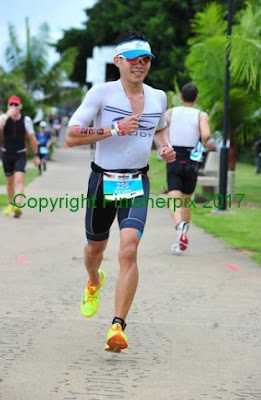 But as I got close to the half marathon mark, I was starting to feel some gag reflex coming up my throat. Not sure was is causing this. I still held under 5 minutes but I had to break my no walk momentum when I got to the aid station at the 24km mark. I walked through every aid station from there onwards. The pace dropped to above 5:30 per km then. 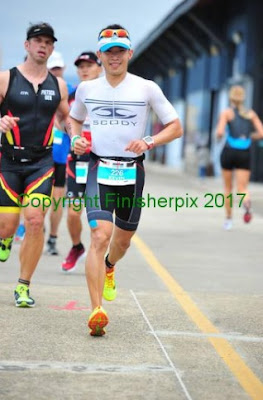 Final lap and it was getting dark. The volunteers were handing out glowsticks and my ego got the better of me so I refused. The floodlights kept it pretty bright anyway. Another thing that boosted my ego was overtaking the same Japanese athlete with a prosthetic leg and not getting beaten by star 55-59 female athlete Jenny Alcorn! I know, I should be ashamed of myself haha. The pace slowed down nearing 6 minutes per km. But I knew if I kept it that way, I would still finish under 10.5 hours. I did a wager with 90 minute handicap with my friend David Zi Xiang in Malaysia who's aiming for 12 hours in Challenge Roth in a few weeks. So that spurred me to keep on pushing for this time. Coming close to the finish, getting cheers from Shane and Kirsty, Trent from the Reddog tent and finally getting a hug from Li-Ann and Sebastian just before entering the chute. My tears welled up as the MC Pete Murray called out - Kevin Siah from Malaysia, you are an Ironman! I crossed the line in 10:28:56 with a run split of 3:38:33, overtaking 122 athletes on the run itself. 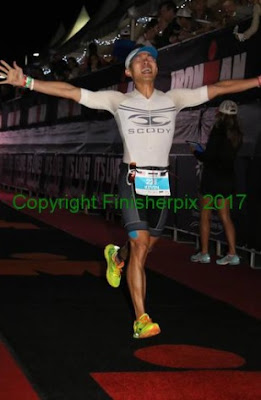 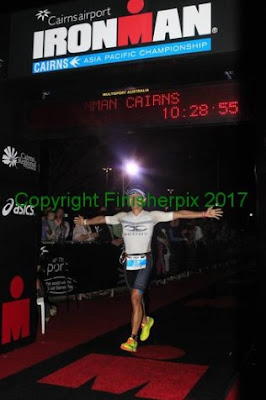 I went to the food tent and soup was the only thing I could stomach. I slowly sipped it down as Li-Ann talked to me over the fence, as she wasn't allowed in. She went to get dinner and then I started feeling a bit faint. Mike kindly took me to the medic tent (thanks Mike!) and I rested there a while. Li-Ann came to get me and after feeling a bit better, I went to collect my bike. Shane (you are a champ mate!) was in town for dinner after finishing his 70.3 race earlier and offered to collect my bike then so I didn't need to push it back to the hotel.

So that wraps up Ironman Cairns once again. My 11th Ironman finish and 3rd one on this course. It has been a while since I've felt this great in an Ironman race and am truly happy with my time. No doubt the race conditions were favourable this year with both overall men and women winners crushing course records. I couldn't have done this without the support of my wonderful wife Li-Ann and my son Sebastian. Not just on the course but off the course is where the big sacrifices are made, just so I could have a play of my hobby, which let's be honest is more of an obsession really. I made a promise last year that I would only do one Ironman this year and that has already been broken, having signed up earlier for Ironman Western Australia later this year. And Li-Ann did not make a big fuss over it and just went for the ride. I love you both!

And thanks everyone - family and friends, for following my race and the cheers, whether on the course or through social media. You don't realise it but this definitely makes a difference. Thank you.

Will I be back again next year? Let's not make any promises just yet, shall we?
Posted by Kevin Siah at 08:52

Amazing Kev. Wow I hope to swim bike and run like you someday.

Thanks Syafei! Hope to see you on the race course someday!