Where do I start? From an event that I signed up almost 3 years ago that I reluctantly decided to go ahead with due to travel and busy work commitments, to one that I am really glad I raced and in fact looking forward to doing it again next year, if the timing is right. Desaru has hosted a half ironman distance for many years but this would be the first time under the Ironman brand, I last did this event 10 years ago. The journey started with a Wednesday night flight from Brisbane via Singapore, which I only slept about 2+ hours during the flight. I did this trip without Li-Ann or Sebastian, as Sebastian had school. But it was good to be home after having not returned for more than 2 years. Did an easy run with some short efforts at my old stomping ground Subang Ria lake in the afternoon. Was initially planning to get a massage but decided against it to avoid catching COVID. So a quiet dinner with mum and dad at home and I went to bed really early that night. 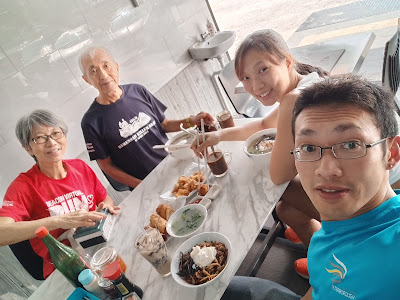 Friday morning, I did a swim with some short intervals at the Club, it was one of the few pools that opened early enough at 7am for public swimming. More hawker food breakfast before we made our journey to Desaru, about 4 hours drive from home. My brother in law Gary was racing too and we took his bike along as there were no space in their car with the kids seats. Race expo was like a reunion gathering, so many friends I've not met for the last two years and for these guys who only started racing again this year, it was the first M dot event since 2019. Desaru have changed a lot since I last came here 10 years ago. There are a lot more restaurants and shops. We stayed in Lotus resort, which was about 3kms away from the race site. Organizers provided shuttle buses but my dad chauffeured us back and forth, really getting spoiled. Dinner with the family, including meeting one of my nephews for the first time. Saturday I spent most of the day in the room, catching up on work. I misread the event schedule and thought the bike check in closes at 5pm when in fact that was for the athlete check in and bike racking closes at 8pm instead. We didn't need to cycle there under the scorching sun if I had known but I guess an early racking allowed us an early dinner, which mum cooked using limited appliances - microwave, rice pot and steamer pot as there wasn't a stove. Did I say again we got really spoiled? 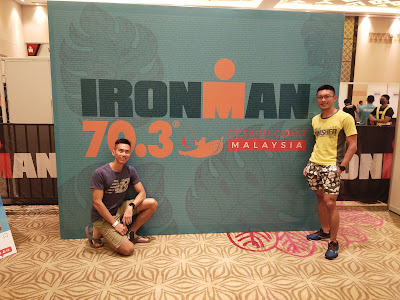 Race morning - 4.30am alarm, first toilet visit, sunscreen on and get dressed. Transition area was very well lit. They had an unusual rule to place nothing but the run shoes on the floor, everything else were to be placed in a green transition bag given to us, to be hooked next to our bikes. There were many empty spots and my bike rack only had one bike next to mine. There must have been many deferrals or transfers. Got the bike set up, munched down on my bread rolls, bananas and Clif Bar, lined up for the portaloo - thankfully only a short queue and then made our way to the swim start.

7.05am rolling start. I squeezed my way through as much as I can towards the front and I was only a minute or so away from the first ones who entered the water. Swim course was one lap triangular shaped in clockwise direction. Desaru waters can get pretty choppy but wasn't too bad for this race. There were some currents though. My swim split was significantly slower going out, very fast after the right turn and then somewhat closer to my usual pace on the way back. One feedback I would like to give was to not have the kayaks too close to the swim buoys. There were several occasions where I nearly swam right into them. As we got close the first turn buoy, I felt like we were attacked by a swarm of sea bugs. They didn't sting but it felt like getting hit by plastic bullets. This attack continued for a fair bit after we made the right turn and it only cleared on the return leg back towards the shore. I was told by others that they could be shrimp.

The waves and the minimal sight buoys made it hard to see if I was swimming straight. In the end I gave up looking for the final finish buoy and just aimed to swim towards shore. I wore a swimskin over my trisuit and was beginning to feel pretty warm, I just hoped that my core temperature did not rise too much before I started my bike. About a couple of hundred meters from the beach, I stopped kicking and emptied my bladder. Crossed the first timing mat in 36:45, a bit slower than my usual swim time but comparatively seemed to be where it should be. Although a couple of minutes quicker would have put me in a better position. My Garmin which normally understates the distance, recorded 1,938m for the swim. I was 11th in M35-39 age group at this stage. 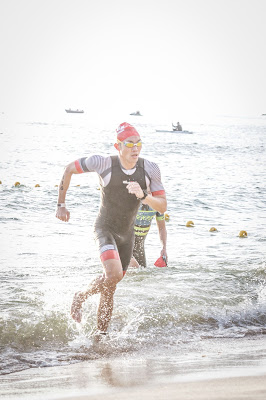 We came to long gradual climb just a few hundred meters from the mount line. But nothing that needed shifting into the small chainring. We head out for about 10kms up to roundabout and turn left for a short detour before u-turning to the same roundabout and head out again for about 20kms. We return on the same route and make a second lap through the same roundabout. The roads seemed to have been recently resurfaced, making it a fast and smooth. There were some rolling hills but nothing too steep. Overall elevation was just under 400m on my Garmin. There was a bit of headwind on the way out but not too extreme, in fact felt like a normal breezy day in Brisbane. We were very lucky with the weather, it was overcast throughout and it started drizzling halfway through the first lap, which helped keep us cool. 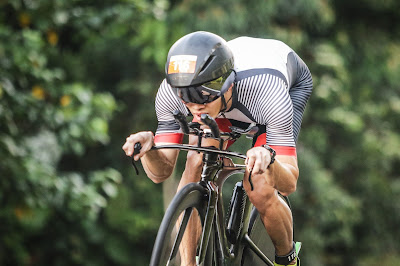 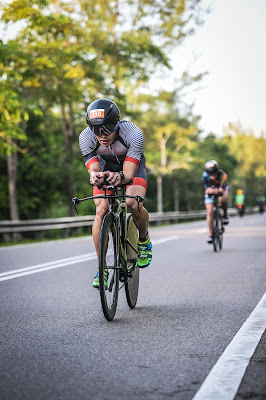 I rode conservatively on the way out, was averaging just over 180 watts and just over 34kph. On the way back with the tailwind, I overtook a few more. And then just as we started the second lap, I noticed the few cyclists in front were not getting further way so I decided to make a go for it. Having more cyclists now on the course, some on their first lap - whilst it be more distracting, it also allowed me to leap frog ahead easier. I was riding at lower efforts but clocking higher speeds. On the final lap back with the tailwind, I knew doing a sub 2:30 bike split (36kph) was in the bag. And I started focusing on loosening up posture and getting ready for the run. There was only one cyclist who passed me and I did not overtake back, but we actually finished together with me just dismounting right behind him. My Garmin clocked 2:28:47 for 90.2km, average speed 36.4kph and average power 184 watts. But that bloody timing mat was just before the bike racks, instead of the mount line, giving me an official time of 2:31:03. I went up to 6th in M35-39 at this stage. I had 3 Endura gels and 400ml of Infinit Go Far. Long run in along the carpeted rough surface, including pushing the bike up that same steep hill. It was good to see there were only a few bikes in transition. Put on my shoes but my helmet fell off the bike as I was pulling out my gear from the transition bag. After the race I noticed there was a small crack on the the visor and this is my second set! Running out of transition whilst putting the race belt, visor and sunglasses on and doing a bit of the YMCA dance as the music was playing. Official time had me clocking 1:57, with my Garmin adding about a minute from the dismount line. 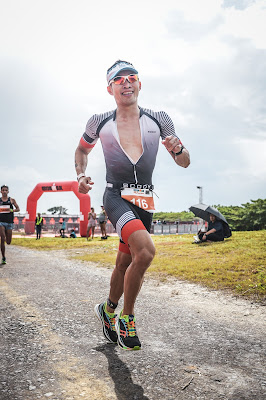 I wasn't expecting a fast run given the tropical heat and apparently a pretty hilly course (I didn't get a chance to see it pre race). But the cheers and support from family and friends always gave me an extra boost. Special mention to the RC Coaching team for the high fives at the start and end of each lap. It was a 3 lap course, with the first 2kms of two way traffic and 4kms of looping around the park. There were a few punchy hills and it was mostly shaded. Again, the weather was very kind to us with mostly overcast. 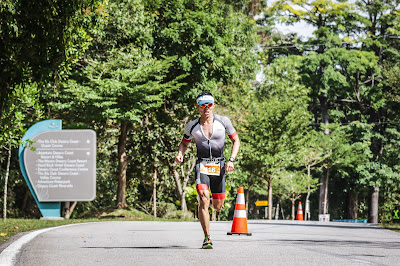 I started again at a conservative pace, just under 5 minutes per km. The first lap was pretty lonely, especially on the loop. The second and third lap were much better and I picked up the pace as well. I pretty much had the same routine at each aid station, sip of cold water and the rest down my head and legs, a big gulp of Coke, another sip of cold water and pouring the rest over me again. Starting the 3rd lap, I noticed leading Malaysian Teh Kuok Yuen was about 10 minutes ahead. Little did I know that he was struggling with cramps and I finished just under a minute behind him. 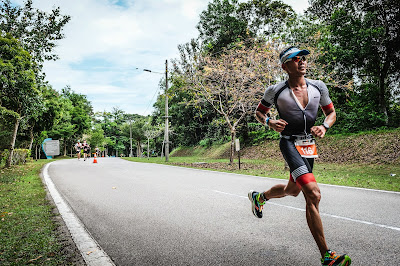 Running into the finisher chute, the music, the cheers from the crowd and seeing my family waving at me. I couldn't help but to feel emotional. Gee, I'm such a cry baby - I used to only cry at full ironman finishes. Crossing the finish line with tears in eyes, fist pumped into the air, giving race director CG Lim a hug after I crossed. I finished in 4:54:11, run split of 1:41:42 for 21.2km recorded on the Garmin with 130m elevation gain. I was 18th overall and 6th in M35-39 age group. 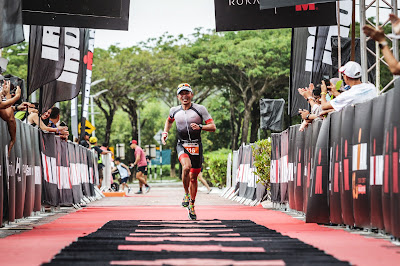 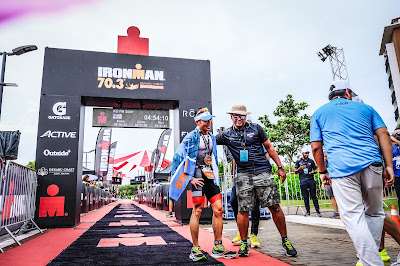 Briefly caught up with Kuok Yuen and shortly after the 3rd and 4th Malaysians came through. We each were interviewed on how our race went. Reunited with the family and it seemed that my poor parents had a big day too, chasing after my nephews. It wasn't long until Gary finished too and we then had some lunch. Then it was bike check out and the sun was out as we cycled back while the rest of the family drove back to the hotel. Gary and I attended the World Championships roll down ceremony later that afternoon. Whilst initially I wasn't planning to go, it would be in Finland next year but I then became tempted knowing I am unlikely to place this high in my age group again. I even rang Li-Ann to get the green light. But alas, there were only 3 spots in my age group and the last spot was taken by 4th place. Try again next time I guess! 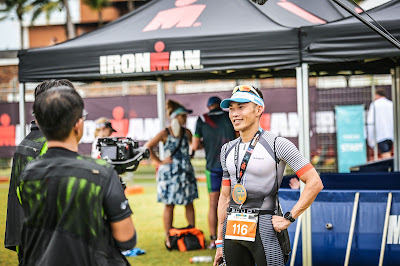 Signing off, I am very happy I made this trip. I am pleased with my race performance and ticked off a few boxes - sub 5 hours finish and 2nd place Malaysian, 6th place in M35-39 was unexpected. But what was more special was catching up with family and friends, getting spoiled by mum and dad, spending time with my nephews. This is why I enjoy racing in Malaysia so much. Hopefully I get to do this race again next year!