It's been a while since I wrote one of these. I was evidently disappointed with my race at IM Busso in December. Then I sprained my ankle late January, which took forever to recover. Even now it's still not a 100%. I've signed up for this race last year - having done the full distance on this course many times and it is one of my favourite race courses. But it wasn't until a few weeks ago that I decided to go ahead with it. Li-Ann and Sebastian were away for two weeks and conveniently, a work travel to Cairns was planned for the week leading up to the race. So I had my flights paid for, which was handy. 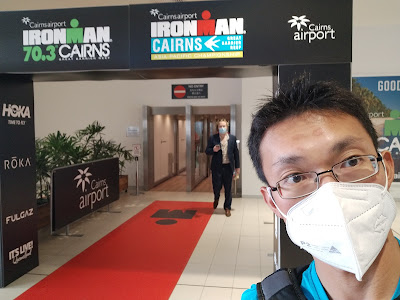 The temperature difference between Brisbane and Cairns was pretty significant during the week. It wasn't until Friday that it started to cool off a bit in Cairns. Once my work week was done, I checked into Caravella Backpackers, about 1.5km from the race precinct. I had my own private room, it was pretty decent with ensuite but boy, it was really quiet. I guess the backpacker crowd hasn't quite returned to Cairns yet post pandemic. Saturday morning, I picked up my race pack, dropped off my bike at the transfer service. Had a haircut at the local barber. Chilled for a while, met a relative for lunch (thanks for lunch!) and then onto the shuttle bus to Palm Cove to rack our bikes. Only to find out that our bikes were already racked and 70.3 athletes were only to bring our bike gear bags the next morning. Could have saved the trip! Anyway, it was useful to listen to the transition briefing as I've never done the 70.3 distance here before. Back to Cairns, takeaway pizza from Dominos for dinner. Then an early night. 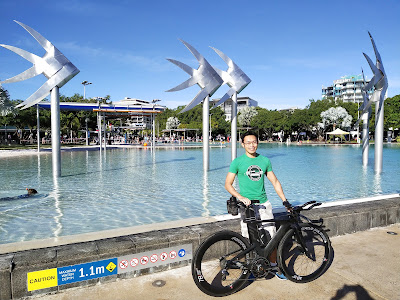 3.30am alarm went off. First toilet visit. Suit up and then easy stroll to catch the shuttle bus to Palm Cove. There was a bit of chatter in the bus but most, like myself, were quiet. I was trying to catch more shut eye. Got told off by the athlete next to me as I was setting up my transition as apparently I was standing too close to his helmet hanging by his saddle. Mate, we are all trying to set up in very tight spaces here, you don't have to be a dick. If you're so concerned about your helmet, maybe just wait until I leave and you can put it back on. Sheesh.

Once set up, I went away to eat my breakfast. I may have eaten 2 slices of toast too many as I had a bit of acid reflux for a fair bit of the bike later. Queued up for the portaloos, it didn't take too long. Put on the wetsuit and headed to the swim start. I was able to warm up a bit in the water for a few minutes... and release more excess water. There were some waves but definitely one of the calmest conditions I've had in Palm Cove. Lined up, turned on the GPS and put some spit into the goggles. 10 deep breaths. 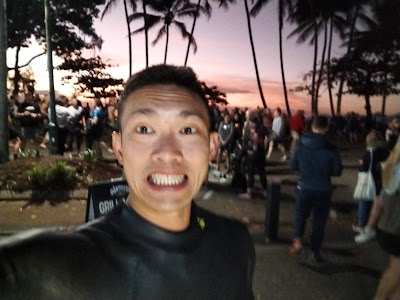 1.9km swim
Rolling swim start at 6.35am, it was about 7 minutes past the horn when I ran from the start line, heading into the water. The swim course is rectangular shaped, swim south for a bit, then turn left out into the ocean and left again with tide assistance for most of the course before a final left turn back to the beach. The full Ironman athletes would have to go through it twice, so their tide assistance gets balanced out. I was swimming mostly by myself when we went against the tide but on the way back I had some company to draft off. One last bit of releasing excess water - I had to stop kicking for a bit to do this, before I get onto the beach. Time clocked was 31:51 with 1,812m recorded on the Garmin, which usually understates the distance. I was pretty happy with the time, I guess the tide assistance helped. But looking at the results after, I was relatively slower compared with my peers. I didn't have any wetsuit practice since Busso last year, so would definitely get more of that in before my next wetsuit race. 31st in M35-39 at this stage. 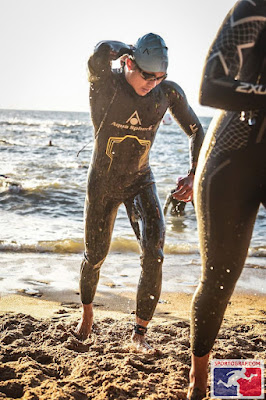 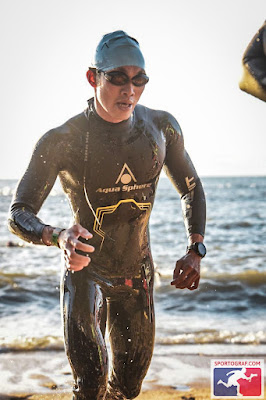 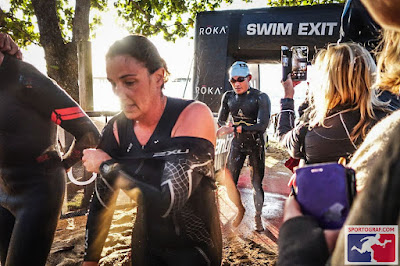 A bit of running through some rough sand and grass. Also had to watch out for some root branches and drain curbs. Somewhat disappointed that many of the bikes on my rack were already gone, but such is a rolling swim start. Wetsuit off, wipe the sand off my feet, socks on, helmet on. Would have liked to just grab the bike and go but had to pack the wetsuit and swim gear into bike gear bag first as well made sure it was tied securely so that nothing fell out. It was a fair bit to run to the bike mount line too. It was pretty crowded there but I got on without too much drama. It did take me a while to strap my shoes in though. The straps on the Bont Riot Tr+ shoes are very short and tend to come of the buckle easily. Trying to get them back in whilst pedaling proved to be pretty challenging! I lost a lot of time here. Total T1 time 3:34. 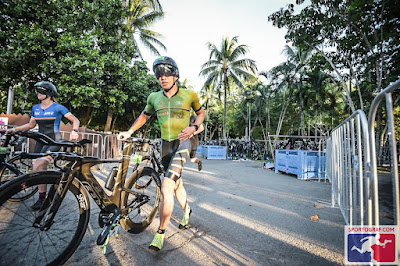 One lap bike course, starting from Palm Cove, heading north for 30kms and then all the way back to Cairns. With one big climb at the Rex lookout in both directions but plenty of rolling hills in between until we get closer to the city where it was mostly flat. Full Ironman athletes had to do two laps between Palm Cove and Port Douglas and twice the climb at Rex. I felt fairly comfortable on the bike, was building my pace up well past 36kph with the tailwind of course. It would help though to know the course a bit better, so I could just let loose when descending on the corners and not have to brake a bit prior. The road surface was also pretty coarse and I would definitely reduce the tire pressure (I was at 100psi for 25mm tires) the next time. Cairns has one of the most gorgeous bike courses out there, definitely a must do if you haven't done it before.

With the rolling hills, there were some sections where everyone got bunched up, but overall I didn't see any blatant drafting, at least for me anyway. I thought I was able to get an average of 36kph with a 2:30 bike split. But the hills plus the rough road surfaces made it challenging and when we got closer to the city, although it was mostly flat, it was more exposed to the headwind. So glad I was only doing the half. I then revised my target to a 35kph average (just under 2:35) but eventually I got to the end in 2:37:24, thanks to Garmin recording it as 91.13km. Elevation gain was 450-460m. Average speed was 34.7kph, average power was 179 watts - a little bit lower than my usual race output but not too far off. I gained another 4 spots to 27th in my age group at this stage. Nutrition taken was 2 SIS gels and about 400mls of Infinit Go Far. 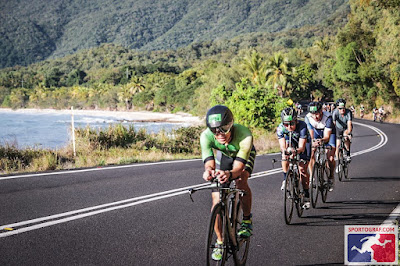 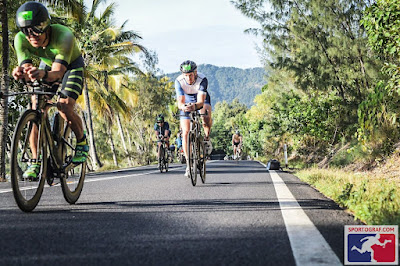 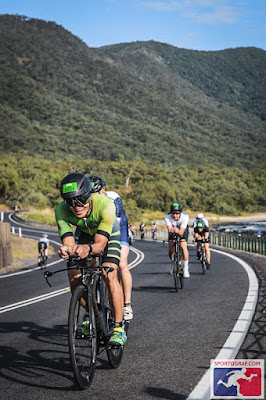 Transition 2
Did a pretty good dismount, legs did feel a bit tight running the bike to the racks. I overshot by a bit and had to back track. Racked my bike, untied run gear bag and let everything fall out. I don't know why but I took the time to pack my helmet into the run gear bag and placed it neatly on the grass. Slipped the shoes on and grabbed everything else (sunglasses, race belt and run visor) and go, putting them on as I ran out of transition. Time taken 2:41. 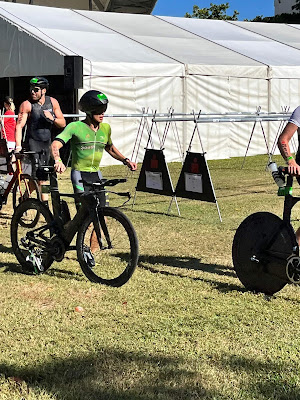 Run 21.1km
Run course was 2 laps, first going around the marina and then out along the esplanade towards the airport and back. Full Ironman athletes would have to do 4 laps. Virtually flat and pretty shaded when we were running through the park. I always loved the run. The atmosphere was electrifying, crowds were cheering from the restaurants and club tents. I felt fairly comfortable and was holding around the 4:30 per km pace. Not as fast as I was before but given my dodgy ankle, I was pleasantly surprised. I held this pace until about 7km mark, which was somewhere in between the first turnaround and on the way back towards the end of the first lap. I caught up with my friend Nathan ahead and decided to run with him for a bit. The pace slowed but it was more pleasant having some company. We ran together until just before the final turnaround where he said he needed to take a break, so I pushed on. 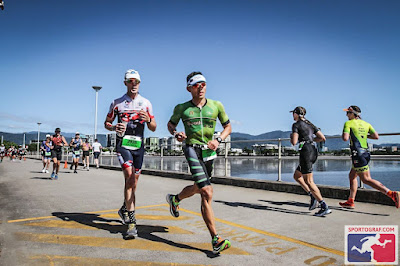 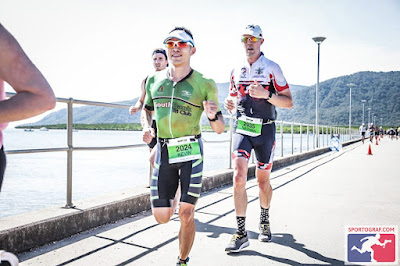 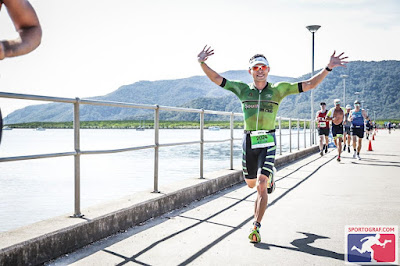 My pace didn't get much faster after though. My ankle was beginning to hurt. Again, so glad I was only doing the half. The last few hundred meters was bit of a hobble, hang in there, don't fall apart! Got to the finisher chute and was able to do a bit of a dance before I crossed the finish line. Announcer Pete Murray saw my Malaysian flag on the screen and promoted the upcoming Desaru Coast 70.3. I asked if he would be there and he said he would. Run split was 1:39:06 with distance recorded as 21.23km. Average HR was 148bpm and the max temperature recorded was 27 degrees Celcius. I ran myself into 22nd position in my age group (128th out of 1,434 overall) with total finish time of 4:54:37. About 25 minutes slower than my PB from Sunshine Coast 70.3 last year but in my current form and the more challenging course, I guess clocking sub 5 hours is nothing to be ashamed of. 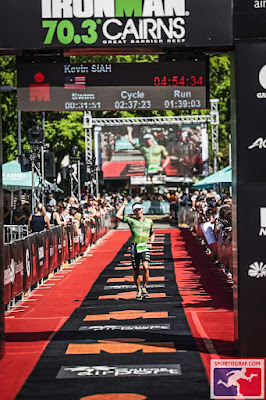 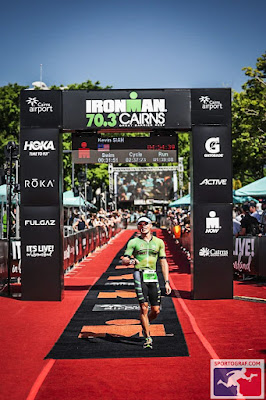 Felt pretty sore but generally okay. Had a chat with another South Bank tri club member in the recovery area and then bumped into Nathan again while waiting for the massage. After picking up my bike, I went back and cleaned up and didn't come back out until later in the afternoon to cheer the full Ironman athletes. It definitely did ignite some fire for my next Ironman race but let's see how this ankle holds up as I increase the training load in the coming weeks. I had another day of work in Cairns before flying back to Brisbane. Getting back into the routine again now, next up Desaru Coast 70.3 - see you there Pete! You’re always super amazing out there. I love seeing how triathlon is done well. Good luck for your next race - Bel

Thank you, the finish line always gets me moving no matter how tired I am