Before I start, I'd like to acknowledge the tragic passing of one of the athletes from the race. The athlete experienced a personal health episode during the run and while the medical team did everything they could, the athlete sadly passed in the hospital later that afternoon. My thoughts and prayers go out to his family and friends.

This was my 6th time racing Tweed Coast Enduro and it has only been around for 7 years. I missed out of the first one, it was when I first moved to Brisbane and did not know of the event. Located in Pottsville, an easy 1.5 to 2 hours drive from home, depending on traffic. In a small laidback town but the local community really comes out in full force to support the event. I was bringing the club tent and family came along. My wife and son took the train to Robina, about half way there and then we all squeezed back into the car for the rest of the journey. There was not a cloud in the sky and it was hard to believe that it would be raining the next day. I had pizza from the Cabarita Bakehouse for my pre race dinner ritual and my son played at the beach until about sunset and then it was time to head back to the motel and call it a night. 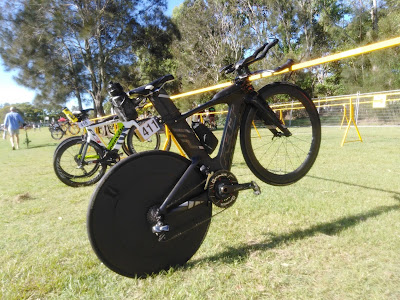 Woke up to the sound of rain. It was an early race start this year at 6-ish am NSW time, so it was still dark. We stayed at the Pottsville Beach Motel, less than 10 minutes walk from transition. It showered a bit as I was walking. Got my bike set up and there was still time to queue up for the portaloos, thankfully they had lights in them. Then it was time to make our way to the swim start, about a 20 minute walk. It showered heavily again and it was quite chilly waiting for our start. Nick was there to keep me company. It was a rolling start and they were strict to make sure we kept to our allocated groups according to our nominated swim times. Nick and I wore pink caps and were told off for lining up with the orange caps who were starting before us. Pink and orange looked the same in the dark to me.

The race organizer had been sending us numerous emails about the potential cancellation of the swim due to poor water quality and sand build up. But I think it the end it was shortened to 1.6km because of the strong outgoing tide for fear that swimmers would be swept into the ocean if we didn't turn towards the beach earlier. We entered the water in about groups of 10+, carefully walking down the wooden steps even thought we have already crossed the timing mat and wade our way through the shallow water until it was deep enough to start swimming. There wasn't much body contact at all as the swim was only in one direction and we had the whole creek to ourselves.

While I enjoyed the push from the tide, the water wasn't as clear as in previous years maybe due to the rain. Or could be just my dodgy 12 year old goggles. I didn't get to draft off anyone and was mostly overtaking those who started their swim earlier. As we came close to the bridge, the tide flow changed angles and it required a bit more effort to swim straight. For some silly reason, I chose this moment to empty the bladder, so I kicked less and noticed I was getting swept away. Quickly get the job done and made my way back towards the beach. Swim split was 21:28 and Garmin recorded a distance of 1,617m with a crazy pace of 1:18 per 100m. I wouldn't even be able to do that in a 100m sprint. I was 28th position in my age group at this stage.

It was a bit of a run into transition. Swimskin off past the ankles, brief wipe of the feet, socks on. The paddings inside the helmet was a bit soaked from the rain. Unrack bike and make like a long a U turn around all the bike racks before getting to the mount line. All up, it was about 500m from the beach to the mount line. There were quite a few other cyclists around so I pushed my bike a bit further in front and carefully hopped on without causing too much of a scene. Total time taken 3:50.

Got a shout out from Philippe as I started the bike. I had the pleasure of racing with him on this course for the past few years but he sat out this year. The bike course is 4 laps in an L shape with two short climbs just before the first turnaround. Typically a headwind on the way out and a tailwind on the way back. There were light showers throughout but nothing too extreme. The roads are a bit patchy but it looks like there were some resurfacing done so they seem pretty smooth this year apart from a small section at the first climb. Nick flew past me about a few kms in and he was gaining about 2 minutes at the end of each lap. I stuck to my own pace and monitored the watts. I reached my typical target of 36kph average sooner than I expected and I was wondering whether I would blow up but the legs felt good and I continue to build up that average.

I dropped my second gel at about the 55km mark as I was fumbling to tear it open, I only packed three so I decided to take my third one anyway and hoped that it will last me to the end of the bike. There were a couple of big packs on the course, one in the opposite direction and one slower one which I managed to overtake but I had to cross over to the other side of the road as they were riding two abreast. There wasn't a lot of draft marshals covering the course, not that I saw anyway. I finished the bike in 2:27:12. Garmin recorded 89.4km, average speed of 36.5kph, average power 192 watts, average HR 151 bpm. It was a PB for 90km ride and I gained 9 places in my age group. I'm glad that my cycling has been improving progressively. Official bike split was 2:32:28 including both transitions.

Got off the bike feeling a bit stiff but felt better after running for a few steps. Rack bike, shoes on and everything else on the go. Do the long loop around the bike racks again, also about 500m between the dismount line and the run timing mat outside of transition. Time taken 2:30

Waved to the South Bank crew as I started my run. The legs and form felt good. The rain has stopped and the sun peeked out of the clouds every now and then. Temperature rose to a maximum of 27 degrees that day. The run course is 3 laps shaped like a T. As the transition layout has changed a bit, so the southern turnaround was extended a bit further. Mostly on foot paths and there were a couple of flooded and muddy patches, which I avoided at first but couldn't be bothered and just ran through later.

I went through the first km in 4:16 and thought perhaps that was too quick. But I managed to hold under 4:20s for most of the first lap. There was no twitching of the quad muscles this time round, just managing the energy reserves. Second lap was a bit slower averaging just under 4:30. Managed to catch Li-Ann and Sebastian before I started my third lap. I somehow gave in a bit after that and started creeping past the 4:40s. I knew that finishing under 4.5 hours was in the bag, which would be a course PB even after adding 10 minutes for a shortened and fast swim. So I didn't quite get into the hurt locker as much and steadily took it home. My run split was 1:33:39 for 20.9km according to Garmin, average pace 4:29 per km, average HR 168bpm. I gained another 9 spots, finishing 10th in my age group and 68th overall. The field this year was massive, it was a sold out event and my age group had 2-3 times more people than the previous years. My overall finish time was 4:27:37. A bittersweet feeling that I can't quite claim this as a PB with the shortened swim but I think the bike run combo may have come close to a PB.

This is truly a top notch event put on by organizers with a heart, that always give back to the community. Next year's race dates have already been released and I'm pretty sure I'll be back again for race number 7!