First race of 2021... well it was supposed to be Robina Olympic 4 weeks ago but that got cancelled no thanks to a 3 day lockdown in Brisbane. My last race here was 5 years ago, just before Sebastian was born. This is my 3rd time racing Hell of The West and I felt that I was in good form to break a PB, target was to go under 4 hours 20 minutes. And after some sub par performances in my last two races of 2020, I was almost desperate to do well this time.

Goondiwindi is a good 4 hours drive from home. I took the South Bank tri club tent with me, so there wasn't a lot of space for the family to come along. Plus, it isn't quite a tourist destination so it was decided that I would travel solo. Just have to make sure that I take plenty of breaks on the return drive after the race to stay awake. I left home on Saturday morning just after breakfast and arrived just in time for lunch. The motel was ready for check in and the reception was kind enough to extend my check out time the next day by another hour, so I could shower after the race. We had a bit of fun in the afternoon by recreating a shot from 2 years ago of jumping into the river. We managed to set up the tent just before heavy downpour, which is pretty uncharacteristic for this area at this time of the year. I had an early dinner and got into bed, ready for an early start the next day. 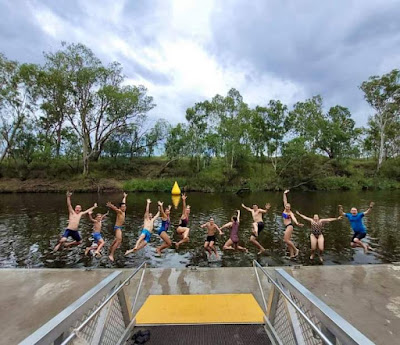 3am alarm went off, had a pretty decent night sleep surprisingly. Packed sandwiches and a banana from home. Short 700m ride to the race site in the dark, I didn't have my bike lights with me but thankfully the street lamps were bright enough. After racking my bike and setting up in transition, I still had some time to queue for the toilet for my 3rd sit down that morning (race nerves!). Met up with the other South Bank tri club members and made our way to the boat ramp for the swim start.

Deep water start in the Macintyre River. The river is actually the state border between New South Wales and Queensland. And because of daylight savings, you could be moving between time zones throughout the swim, if you found that interesting. Also, it was still dark when we started our swim at just after 5am. I had my Garmin 935xt on for the first time and I wasn't familiar with the light function but it seemed to stay lit on it's own. Maybe it's sensitive to water or the dark, I don't know. There were only two waves for male age groupers - under 45 years and 45+. So there was plenty of contact for the first few hundred meters before it started to clear out a bit. I did get a good pair of feet to draft off on a number of occasions but spent most of the swim on my own.

The course was out and back, there was only one turnaround buoy, which caught me by surprise as I was expecting two so that we make a 3 point turn. Traditionally against the current at first and then current assisted on the return. But I honestly cannot say I felt I any assistance, the swim just felt heavy throughout. It was time for me to get new goggles, this pair is over 12 years old and the lenses are very worn. I couldn't see clearly on my watch, so I couldn't track my progress but it beeped every 500m, so that gave me an indication of how far into the swim I was. Came out of the water in 35:07, which is right on target for 35 minutes. Garmin measured 1,935m at 1:48 per 100m pace, which is slower than usual but it seemed to be the case for everyone. 10th in my age group at this stage. 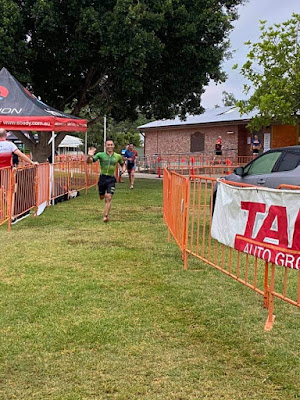 Run up the boat ramp and fairly long trip to the bike racks, about 500m. Swimskin off all the way past my feet - didn't forget them this time! A bit of a wipe of the feet, socks on, helmet on, unrack the bike and off we go. Carefully mounted the bike at the mount line as there was one other cyclist next to me. And ready for the ride! Time taken 2:57.

The organizers decided to switch to a new road this year. For the better. The road surface was smoother and there were gentle undulations which helps break up the constant, monotonous pedaling on a completely flat road. It was still a one lap, out and back course. So for the first half, once you've overtaken (or been overtaken) and settled into your position, it was a mental game to stay focused when there was no one else around you. It my the first time getting HR data on the screen during a race, I was averaging 160bpm, which surprised me as I normally only hit this high on my runs, not on the bike. But then again, I rarely get to hit this sort of intensity on my outdoor rides in training. The weather was exceptionally good this year, with overcast skies and low winds. I was holding around 38kph average and in sight for a sizable improvement for the bike split.

Nick and then Alex overtook me around the 30km mark. I was able to pass Alex again but Nick continued to increase his distance. The turnaround point caught me by surprise, it was just a single cone in the middle of the road. I didn't brake early enough and went past it a bit. It felt like a bit of a headwind on the return trip, but only just slight. A large train of cyclists passed me somewhere around the 50km mark, I hung on trying my best to keep legal distance. This went on for about 10km or so and then it happened. The draft marshal came by on the motorbike and showed me a blue card. I accepted it as I was definitely pushing the limit but I was a bit annoyed that I was the only one in the group who got penalised. Anyway, nothing I could do. I lost a bit of rhythm and my last 10km or so was a bit slower. Checked into the penalty zone, which was conveniently just by the dismount line. And waited - the longest 5 minutes in my life! The Garmin stopped at 2:07:41 for a distance of 79.3km, average speed 37.3kph and average power 194 watts. Official bike split was 2:13:23 with the penalty, 22nd in age group at this stage.

I've unstrapped my shoes before and kept them clipped in so I could just run my bike to the racks. Had a brain freeze moment after putting on my shoes as I was wearing my run visor. I could put the rest on while running, so I should get moving! Time taken 1:15. 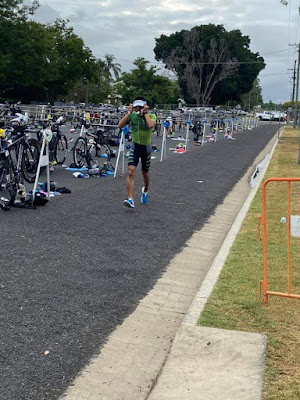 I was still feeling positive. I calculated that I had to run just under 4:30 per km pace to have a shot of hitting my target. Which I should be able to do as I usually hold this pace in my long run training. First km I went out in 4:10, probably a bit too quick! I settled into 4:20 something for the next couple of kms. And then, my quad muscles started to twitch. Reluctantly, I slowed down the pace to around 4:45 but tried to keep the efforts steady.

The course was 3 laps on foot paths, partially shaded and shaped like a T. The sun started peeking out of the clouds later in the day and temperature started to rise. Whilst my target time was no longer within reach, I switched my focus to catching Alex and Nick in front. Nick wasn't feeling the best and I passed him about halfway into the 2nd lap. I had to dig deeper and it wasn't until the start of the 3rd lap that I managed to pass Alex. Mentally I gave up a bit after that, I started to creep past 5 minutes pace, looking over my shoulder every now and then to make sure Alex wasn't catching up. Finally, I got to the end with a 1:32:30 run split, Garmin recorded 19.7km with an average pace of 4:41. 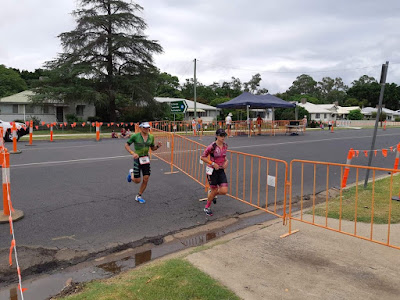 My overall finish time was 4:25:11, about two minutes slower than my last race here. Not that it meant anything, even deducting 5 minutes for the penalty, I would have still fell a bit short on my target. I placed 8th out of 25 in Male 35-39 and 59th out of 311 overall.

The Goondiwindi triathlon club put on a great event and this event really gives back to the local community. I am glad I am part of the 30th anniversary of this historic event and hope to be back again. If the drive wasn't so far, I would do it every year! Overall, despite not achieving my target, I'm pretty happy with how I executed the race. Looking forward to Tweed Coast Enduro in 4 weeks time! 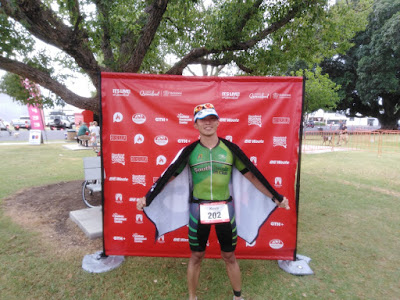